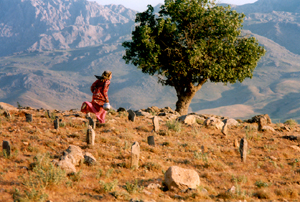 The changing face of the Melbourne International Film Festival (MIFF) in recent years – its “inclusive-ness”, its broad appeal, its ever-expansion – has prompted the local community to reflect on the purpose and current “definition” of the Festival (1). Indeed these questions have seemed more urgent at present given the enormity of this year’s Festival and the diverse and eclectic ground that it traverses. Is it a special exhibition outlet for films that would never get a commercial release on local cinema screens? Is it about capitalising on the “popular” appeal of cinema? And so on. The reality is that the Festival is all of these things and more. This year’s program spans the latest in world cinema from retrospectives of “obscure” directors to animation to experimental filmmaking to documentaries to nation-based spotlights to digital-based works to forums and so on.

In a way, MIFF’s 2000 essentially broad and balanced program reflects the very diverse and eclectic nature of the local film community, as it exists today. It is no longer comprised exclusively of a bunch of hard-core cinephiles passionately consuming hours of film in one day. There are those whose interest in film may be less demonstratively passionate or obsessive. They may be interested only in a particular genre of film, a particular style, a particular subject matter and so on. Meanwhile, there are sections of the public whose interest is restricted to the realm of the digital or multimedia or animation. There may also be those discovering cinema, for whom retrospectives are very important. The Melbourne International Film Festival, as it exists today, caters for all these interests and needs. Fortunately, this broad appeal suits the Festival’s marketing agenda, which is to ensure the Festival is a well-attended, financially successful event. Indeed, over the last 20 years, the Festival program has changed according to the changing sensibility and multi-faceted nature of the film community. It is important to note, furthermore, that the Festival succeeds in offering a balanced program with a broad appeal, without significantly compromising any one of its particular aspects.

Ultimately, MIFF fulfils its role as a significant event in the local screen culture calendar – it’s a time not only when the city of Melbourne and its inhabitants become enchanted by the movies and the experience of discovering exciting cinema, but also a time when cinema, in all its forms, is taken seriously in this city.

Although a broad and balanced festival, MIFF is still faced with its shortcomings, in particular, the lack of cutting-edge world cinema in this year’s program (pressing omissions, for example, include the latest film by the Dardenne brothers Rosetta, which won the Palme d’or at Cannes last year or L’Humanite or the films of Tsai Ming-liang). Regardless, this year’s festival promises to be a wonderful and exciting 18 days. There’s an impressive amount of forums scheduled, admirable given the enrichment that dialogue provides amidst the fervour of film viewing. There are many festival guests, including French filmmaker Claire Denis, specially curated “packages”, premiere screenings, shorts, documentaries, and so on.

The biggest section of the Festival is of course the “International Panorama”, which this year includes over 50 films. Almost 20 of these are from the US, followed by the UK, which is represented by almost a dozen, and then one or two films from a range of countries throughout Europe (Italy, Spain, Iceland, Finland, Netherlands, Czech, Germany, Norway, Poland, Slovenia), Asia-Pacific (India, New Zealand), North America (Canada) and the Middle East (Iran). 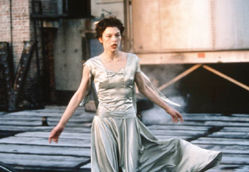 Highlights of the “International Panorama” section include films by long-standing, legendary art cinema directors, such as Wim Wenders, whose latest film The Million Dollar Hotel (1999) stars Mel Gibson, Jeremy Davies and Milla Jovovich and is co-written and produced by Bono, lead singer of U2. Wenders is undoubtedly one of the most important filmmakers alive today. There is also Roman Polanksi’s latest film The Ninth Gate (1999) starring Johnny Depp.

Other highlights include the latest Abbas Kiarostami film The Wind Will Carry Us (Bad Ma Ra Khabad Bord, 1999). Audiences may recall his previous film Taste of Cherry, which played at MIFF in 1998. Two great coups for the Festival are the co-winners of the 2000 Cannes Jury Prize Award: Samira Makhmalbaf’s Blackboards (Takhté Siah, Iran/France, 2000), whose film The Apple (1998) played in MIFF last year; and the Swedish/French/German/Danish production Songs From the Second Floor (Sånger Från Andra Våningen, 2000) directed by Roy Andersson. Both films come to Australia direct from their premiere screening at Cannes. Other highlights include an Indian musical (Straight from the Heart, Hum dil de Chuke Sanam, Sanjay Leela Bhansalis, 1999), an Italian musical (Passionate Women, Appassionate, Tonino De Bernadi, 2000), a film by Steven Soderbergh (The Limey, 1999), a Spanish melodrama Alone (Solas, Benito Zambrano, 1999), and an Indian film and winner of the Camera d’Or at Cannes 1999, Throne of Death (Marana Simhasanam, Murali Nair, 1999).

The films of the “International Panorama” section most likely to attract the largest numbers are those that will no doubt receive a local release at a later date, such as Ordinary Decent Criminal (Thaddeus O’Sullivan, 1999), High Fidelity (Stephen Frears, 2000), Jesus’ Son (Alison Maclean, 1999), The Virgin Suicides (Sophia Coppola, 1999), American Psycho (Mary Harron, 1999), Return to Me (Bonnie Hunt, 2000) and Wonder Boys (Curtis Hanson, 2000) – all with ‘names’ attached to them to ensure their prominence in the program catalogue.

Despite the ‘name’ factor (which was most likely very instrumental in the film’s realisation and worldwide attention) and the influence this may have on attracting audiences, Sophia Coppola’s The Virgin Suicides (1999) is an affecting film, formally keyed to evoking budding female sexuality and the melancholy of its repression. Ordinary Decent Criminal, which stars Kevin Spacey as an Irish criminal, is very much in the tradition of John Boorman’s The General (1998) – the anti-social-hero who robs and steals but is never caught by the authorities and whose criminal behaviour represents not only a perverse rebellion against the system but also a stab at individuality and fame. Curtis Hanson’s Wonder Boys, is a very well-scripted and charming character-driven film about an aging English professor and writer, Grady (Michael Douglas), whose life becomes increasingly complicated and frustrating because of his own personal crises and the needs of the people around him. A bustling, lively and quite modest film.

Another major section of the Festival is the “Australian showcase”, which includes over 16 films, comprised of both documentaries and features. Highlights among the features include Angst (Daniel, Nettheim, 2000), Closing Night film Mallboy (Vince Giarrusso, 1999), Hurt (Philip Crawford, Matthew Priestley, 1999) among others. Highlights of the documentaries include Rick Farquharson’s Orientations Chris Doyle: Stirred not Shaken (2000), Trevor Graham’s Tosca: A Tale of Love and Torture (2000) and Nigel Buesst’s Gerry Humphrys – The Loved One (2000).

Contemporary Asian cinema is without doubt a major source of innovation and richness in the landscape of world cinema. Even mainstream distributors have clued onto this, evident in Columbia TriStar’s recently launched SilkScreen, a program of six Asian films to be released throughout Australia over the upcoming six months. For those seeking “a window on another world and culture” or exciting and innovative cinema, the Festival’s “Regional Focus” promises to be a rewarding experience. An absolute must-see is Takashi Miike’s Audition (Japan, 1999), which is discussed at length by Geoff Gardner in this issue. Freda Freiberg recommends the two films: Zhang Yuan’s Seventeen Years (China/Italy, 1999) and Thai film Nang Nak (Nonzee Nimibutr, 1999). Other highlights include Gemini (Sosiji, Shinya Tsukamoto, Japan, 1999) and Nowhere to Hide (Injong Sajong Polgot Obta, Myung-Se Lee, Korea, 1999).

In addition to the Festival’s region based packages, are those based on the career of a single director. These include retrospectives of Seijun Suzuki, Luis Buñuel and Ken Russell. The prolific career of Suzuki means that this retrospective represents only a slice of his output. In a fascinating and intelligent overview and discussion of Suzuki, Stephen Teo provides the perfect critical context to accompany such a retrospective and to appreciate the talent of this legendary Asian B-grade director. The Buñuel package, which includes titles such as L’âge d’or (France, 1930), Viridiana (Spain/Mexico, 1961), Simon of the Desert (Simón del Desierto, Mexico, 1965) and The Discreet Charm of the Bourgeoisie (Le Charme Discret de la Bourgeoisie, France/Italy/Spain, 1972) similarly offers audiences the chance to either discover or re-discover his cinema. A collection of short appreciative essays on these films can also be found in this issue. 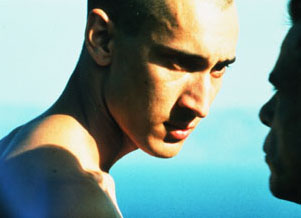 Indeed one of the most exciting spotlights of MIFF is the focus on the films of Claire Denis, “Written on the skin – the films of claire denis”. This spotlight spans Denis’ career from her extraordinary debut Chocolat (1988) to U.S. Go Home (1994) to her latest film Beau Travail (1999). In his discussion of Beau Travail, Kent Jones eloquently argues that “Denis and Agnes Godardalways keep their images attuned to the beauty of natural forms, and emotionally grounded. Formal excitement and emotional specifics are in perfect alignment: the first never misshapes the second, and the second never curtails the first.” (2). In a rare opportunity, local audiences are invited to view the development and evolution of Denis’ tremendous and unique cinema.

The documentaries in this year’s Festival are also a rich and exciting bunch, ranging from Werner Herzog’s My Best Fiend (Mein Liebster Fiend, Germany, 1999) to Crazy English (Zhang Yuan, China, 1999) to Cinéma-Vérité: Defining the Moment (Peter Wintonick, 1999) and a healthy selection of taboo and sex-based documentaries previewed in this issue also.

But there is more. Shorts, music documentaries, digital and multimedia-based work, animation, and theme-based packages of experimental cinema – “Peepshow – titillation & the moving image” and “Citadel – film & video exploring the city limits”. In addition to all these screenings are forums with filmmakers, academics and critics on a range of topics coinciding with the Festival.

The 49th Melbourne International Film Festival is indeed enormous. This is a great opportunity to see lots of cinema that isn’t normally on offer. Whatever your particular interest or taste in the moving image, the broad and wide program of the 49th MIFF is sure to cater to it. The challenge lies in opening your heart and mind to the many exciting cinematic experiences it offers.