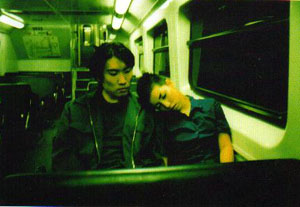 The St. Kilda Film Festival is without doubt a major annual event for the Australian film community and industry. As posted across its flyers and advertising campaign, and agreed by all, it showcases “Australia’s Premier National Short Film Competition”. In addition, and as is evident in this year’s Festival, the program offers a wide range of attractions from an International Program to special guests to various sidebar events such as forums and new media exhibitions. Compared to the myriad of short film competitions and festivals that have sprung up around Australia in the last ten years, St. Kilda offers the broadest range of short films (it is not limited to a specific genre or theme or format) and is the most highly regarded and well-known among filmmakers, the industry, critics and the general public.

The 17th St. Kilda Film Festival (30 May – 4 June 2000) was the biggest so far. Its largest, and key, component was the Australian Short Film Competition, in which over 30 hours of Australian short films were screened and judged by a panel. The festival received 400 entries and selected 140 of those (a record high for the event). These figures reflect a huge amount of short filmmaking activity going on around this country. From the films selected, roughly half were shot on film (16 mm and 35 mm) and the other on video (SP Betacam and other formats) and they were evenly divided between film school shorts, government-funded shorts and individually produced shorts. It fact, it would appear that people are relying less and less on government funding for short filmmaking. With the rise of digital video and the greater accessibility to, and affordability of, video-based equipment, literally “anybody” can make a film, and they are!

The festival also included a showcase of short films from the runaway-success Sydney-based short film festival Tropfest and “Big Bay Out”, a collection of short films from the past that featured the St. Kilda bay area, presented in association with ScreenSound Australia. The festival also included a serious industry focus with three forums geared toward the low-budget, aspiring filmmaker. Forum topics included: preparing for film festivals; the lowdown on distribution (in particular the influence of the Internet); and the challenges of low-budget filmmaking. In addition, there was a 7-hour “Industry Market Day” complete with stalls representing a range of key industry players, from the Australian Film Commission to Holding Redlich (a film-specialising law firm) to Glimmer Productions to Pop.com (a digital entertainment company formed by Dreamworks and Imagine Entertainment). The defining feature of this event (running for the second time only) was “interactive” – it primarily functioned both as a resource of information for aspiring filmmakers and as a forum for dialogue between the often isolated filmmaker and the myriad cultural organisations and companies that comprise the industry.

Another focus of the festival was the digital realm, which was captured in “Fusion” – an exhibition of works which featured the interrelationship between digital technology, multimedia and the moving image. Topic areas included the latest CD Rom works, interactive documentaries and performance-based installations. This emphasis on the new and the innovative was also present in the entire section of the festival relating to the music video. This was also the subject of the International component of the Festival, which has become a standard feature. The International Short Film Festival Oberhausen was the first of its kind to recognise the music video as a format worthy of critical attention and to program music videos within a competitive short film festival. Extremely exciting sessions based on this topic included: a selection of German music videos from the 1999 Oberhausen MuVi competition; a selection of international music videos from the 2000 Oberhausen program and a selection of Australian electronic music video clips, screened in competition. The range and quality of clips screened were outstanding and highly satisfying. In general, this part of the Festival raised some exciting and interesting questions about the aesthetics of the music clip, its various “genres” and directions, and the inherently musical-lyrical quality of the cinematic image.

The St. Kilda Film Festival is a cultural event. With any cultural event, particular trends and directions can be discerned. One outstanding trend that this festival confirmed was the enormous amount of short filmmaking occurring around the country. The Festival offered six days of literally short film mania. One only had to sit through the multitude of sessions and hours of screenings to gauge the rate of short filmmaking activity in Australia. For the hard-working, aspiring filmmaker, the St. Kilda Film Festival offers the invaluable opportunity to have their work screened before an audience and to network with industry players. Overall, the festival is instrumental in creating enthusiasm around the format and, especially, in fostering some sense of a filmmaking community. The great numbers which attended not only the Opening Night for this year’s festival but also the regular sessions suggested that there is a large and burgeoning mass of aspiring filmmakers and film enthusiasts. This is the right time for funding bodies to continue supporting and providing forums and contexts for viewing and discussing films (local and abroad, past and present).

Yet, the increased production of Australian short films has not lead to any discernible rise in the quality of the films being produced. Throughout the festival, the majority of short films screened relied heavily on a punch line-structure: while some were very good at this others were instantly forgettable. Other common storytelling themes were the mockumentary, a cynical, mocking tone in which characters and urban existence is parodied. Although these may have been entertaining, they did not display any creative engagement with the medium itself and could have worked just as equally as a verbally rendered event. As evidenced in the questionnaire completed by past Festival directors for this journal, the key to a good short film is its ability to say something about the world we live in, to move the audience, to register some connection or impression – cinematically. Although this reviewer did not see all of the short films in competition (but certainly the majority), there were only very few that achieved this key criterion. These were far outweighed by the legion of short films, mainly comedy-based, lacking depth in story and character. That more Australians now have a camera in their hands is only revealing the serious dearth of storytelling vision and emptiness of human and social experience in this country.

In their responses to the questionnaire, past and current festival directors reveal the enormous task and great challenges required in organising a Festival such as St. Kilda. The director faces many alternatives and approaches to take in decisions of programming that are often tied in with other factors related to the size of audience and the level of sponsorship support. This year’s Festival was a monumental event catering to diverse audience interests, from multimedia to music videos to industry-based forums to the latest in short filmmaking in Australia. The Festival confirmed itself as a major cultural event in Victoria, at the same time, successfully legitimating the short film format and acknowledging the great level of amateur short filmmaking occurring today.

Indeed the latter is a cultural phenomenon and this year’s Festival documents that. Yet, if one were to judge the cinematic qualities evident across the short films, one is only left with a handful of worthy candidates. In addition the over-emphasis on comedy only turned this reviewer off further and further, desperately seeking anything that tackled serious drama and new approaches to the medium. Highlights in this area include Flowergirl, Dust, Gravity, People Reading and, in general, the animation. It also became evident throughout the Festival that those short films that contained stories with genuine tension and depth, and that were truly moving and affecting, mostly derived from indigenous issues. Those that lacked depth seemed to be struggling for a story with any emotional impact. The constant recurring problem that became evident when watching these films was an over-investment in story and character, that is, filmmakers were trying to do too much with a particular scenario without paying attention to the potential of the medium itself.

This year’s Festival celebrated the tremendous level of filmmaking activity occurring around the country and the sheer determination, hard work and creative drive of local filmmakers. Above all, the Festival provided a window onto this cultural activity and a chance for filmmakers to have their work screened before an audience. I look forward to the revelations of next year’s Festival.