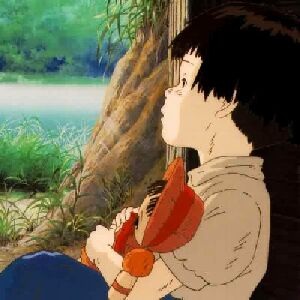 Tombstone For Fireflies (also known as Grave of the Fireflies)

A number of things make this Japanese Studio Ghibli animation a humanist masterpiece, one of them being its incredible sense of physicality. Any film detailing the horrors of war benefits from a strong sense of the physical, of course, but the strength of this film is that every little detail is given a richly physical rendering.

The characters are drawn in a familiar Japanese anime style, but the backdrops (landscapes, buildings, the sky) and other physical entities (food, clothes, various objects) are drawn in a heightened realist style, at times approaching photo-realism. This seems right to me (and not inconsistent): the film is about children‘s reactions to a particularly difficult situation, and so everything is heightened. And this is where the true magic of Fireflies lies. 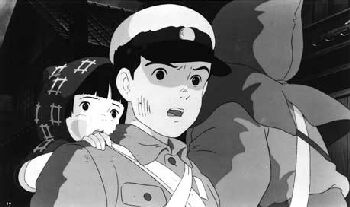 The film is set in Kobe in World War 2, during the time when American bombers destroyed the city, killing over 100,000 people in the process. A boy, Seita, around 14, and his sister Setsuko, around 4, are left homeless and parentless after one attack. The rest of the film charts their attempt to survive, and it is a failed attempt. We are far from Disney here.

There are two great things at play here, as already mentioned: (1) the solid, textured physicality of objects and locations, and (2) the great ‘performances’ by the ‘actors’ as they react to their situation. Children are often great receptacles of pure emotion and pure effect, and Seita and Setsuko certainly conform to this. Their facial and bodily expressions are rich and mesmerising – we as an audience respond to them with deep empathy and heartbreak simply because these expressions indicate profound life-experience.

The film is about the capacity of the human spirit to love. It is not about its capacity to survive. The children don’t survive, and the film paints a bleak picture of all the adults around them. What we see is the sweet love between a brother and sister, and his attempts to find food and shelter for the two of them. Eating rice for the first time in awhile, they savour it, their faces brightening and eyes expanding at its miraculous life-giving qualities. Setsuko is a cute, playful little girl – she smiles and wonders a lot. But her face expresses distress at other times, and then she falls sick – and the lines drawn on that face brilliantly capture those lines we see on real-life young children’s faces when they’re unwell.

Seita, at 14, is at the midpoint between the purity of his sister and the terror of the adult world. He seeks to protect her, even withholding the information that their mother is dead from her. There is a poignant scene where Setsuko buries a score or so of fireflies in a mass grave. Even at 4, she is aware of death. Seita listens to her as she talks of their mother, and he realises that she knows of her death, and he bursts into tears. (Earlier in the film, in a hospital, he saw his bloodied and bandaged mother struggling to even breathe.)

Phenomenologically, animated figures take reality simply as a reference. But the voices of the figures are real voices (if sometimes heightened or altered in other ways). Setsuko’s voice in particular has a vibrancy and life to it that are extremely touching.

Ultimately, Tombstone for Fireflies is a masterpiece not only because of this richness of rendering, but also because of its overall form. The scriptwriting is brilliant – it gives the narrative away at the start (Seita speaks from the grave) and it presents its story with a formal and thematic strictness. What I mean by this is that the script is committed to the story of Seita and Setsuko as experienced from the inside – there is no editorialising (no ideologising, for example, i.e. about the war, America, etc.). There is unity and singularity to this film. Watching it feels like a privilege – it feels like we are getting an insight into a particular time and place as lived through by these two children. It’s a film about death, but the film itself resonates with life.