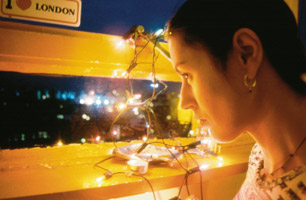 Wonderland (Michael Winterbottom, 1999) is tinged with an almost unbearable sadness. From the opening sequence where our heroine Nadia (Gina McKee) negotiates her way through another failed first-encounter, to all the disparate scraps of human living Winterbottom chooses to show us, the film is suffused with the sense that life crushes people. But it is also anything but a bleak film – it rises and rises, with understanding and beauty, and lifts its characters with it.

Overall, the film is a hotchpotch of various well-known and fashionable elements. There’s the British realist vein (Leigh, Loach, Nil by Mouth, etc.); the Dogme-like camerawork (though Winterbottom employs a more classical vérité form); the narrative and thematic criss-crossings found in films such as Happiness (Todd Solondz, 1998); and those ghost-like expressionistic devices such as slow motion, time-lapse and unnaturalistic sound layerings (seemingly borrowed from Wong Kar-wai). In effect, there is nothing original in this film. But the end result is wonderful, and clearly more than just the enjoyment of the sum of its parts.

The one particular component that seems to pull the film together and make it a unique event is Michael Nyman’s music. Whilst retaining some of his distinctive qualities (formality, repetition), Nyman charges this score of his with emotion and gives it breadth. The music created is heart-wrenching, full of tragic qualities, yet also extremely light (and alleviating in its effect). It is the film’s main grace note.

One could perhaps speculate that Winterbottom has simply struck it lucky with this film, managing to jell all these elements together in a successful fashion without having to contribute anything original himself to the project. I haven’t seen any of his other films, but all I have to do is look at this one to see that he knows what he’s doing – “the evidence is there” (i.e. on the screen), as Jacques Rivette once said about Howard Hawks. (1)

Any fool (and there are plenty of them on the Australian scene at the moment, for example) can string together some well-known cinematic elements and make a film. (2) But to make that process work, you need great judgment, skill and a kind of existential investment.

Winterbottom has created a film that is both realistic and impressionistic. Assured naturalistic performances sit next to dream-like fragments (of the characters, the city, crowds). Evocative doco shots are seamlessly woven into the narrative. The editing, in fact, is immaculate and exciting: every shot seems right, no scene is too long. For example, the last scene is a hard one to pull off without making the situation seem contrived, but Winterbottom manages it (the stumble on the road is a little too cute though).

In a review of Jasmin Dizdar ‘s Beautiful People (1999), Adrian Martin labels Wonderland “mechanical”, contrasting it with Beautiful People‘s sense of “energy”. (3) I personally feel Beautiful People is unwieldy and messy, with Wonderland being controlled and graceful. Winterbottom has a formalist’s sense of rhythm, and he is confident enough to include lyrical passages now and again.

Martin also considers the hope in Wonderland “ersatz”. But the birth of the baby in Wonderland is an awesome and genuinely uplifting sequence (and the hope in the last scene is tentative and without surety), whilst the feel-good shenanigans at the tail of Beautiful People are well and truly located in the land of the absurd.

All the stories in Wonderland are compelling to some degree. I find it satisfying that it’s the more alternative/modish of the three sisters, Nadia, who’s “the lonely one”. Her encounter with the philandering Tim (Stuart Townsend) is typically bruising, but she retains her purity and vulnerability. Her just-as-soulful brother Darren (a beautiful performance by Enzo Cilenti) has the opposite fortunes in love, but also has an ability to connect and give. The siblings’ parents have a marvellous story of their own.

The director misjudges several things though. The music during the birth scene is overdone; some of the contrasts of mood (gloomy Nadia next to revellers on the bus, for example) are overdetermined; and the complications in the Debbie-Dan-Jack triangle are underdeveloped and confusing.

Sean Bobbitt’s high-grain, low-light (obviously 16mm.) cinemascope images are exemplary (shots of crowds looking at the soccer and some fireworks are brilliant). The editing by Trevor Waite is miraculous – talk about perfect intra-scene cutting!

Overall, Wonderland is not a masterpiece, but it’s certainly a wonderful and very poignant film. It contains some difficult truths, and has compassion for all its characters. It looks with a light and giving eye on some of the problems of everyday life.