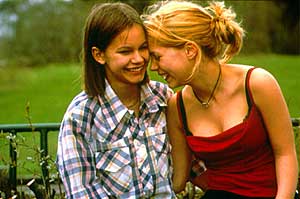 In one way or another, most teen stories are about what cultural theorists call the liminal experience: that intense, suspended moment between yesterday and tomorrow, between childhood and adulthood, between being a nobody and a somebody, when everything is in question, and anything is possible.

Especially for Hollywood, it is only within teen movies that a certain innocence for and about life is expressed. In no other genre (including kids’ films) do we find characters with both an incredible sense of wonder, and a healthy capacity for breaking their lives open. Existential urgency and life transformation are the themes that the best teen films deal with. And in this, they should be seen as models (“spiritual” models, let’s say), rather than being dismissed as “only” films about such things as “coming of age”, “rites of passage”, etc.

Of course, a lot of Hollywood teen films can get bogged down in the mechanics of their genre, and get quite lifeless. Some of the thematic elements are by now over-codified: the high school setting, the tribal splittings, peer group pressure, parental pressure, sexual awareness, etc. Even fine films such as 10 Things I Hate About You (Gil Junger, 1999) or Drive Me Crazy (John Schultz, 1999) teeter on banality. That there is still life in these films is testament to the vitality of the genre. (And then there are the left-wing variations such as Rushmore [Wes Anderson, 1998].)

Many French teen films get totally away from the “teen comedy” genre favoured by American teen films – they are, in fact, well-observed and quite sober character studies. (Some examples: Les Roseaux Sauvages [André Téchiné, 1994], Travolta et moi [Patricia Mazuy, 1993], Passe ton bac d’abord [Maurice Pialat, 1979].) Where the American films can be a little too silly, these ones can be a little too dry. They are dramas rather than comedies, but the filmmakers seem to grant their characters more intelligence and maturity than is plausible, creating somewhat false worlds. (American films can have this flaw too – see George Washington [David Gordon Green, 2000].)

Female teenage angst seems to be fertile content for the teen film, as can be seen in Portrait d’une Jeune Fille de la Fin des Années 60 à Bruxelles (Chantal Akerman, 1994) and All Over Me (Alex Sichel, 1997). Here we have characters with natural intelligence, a capacity for feeling, and an understanding that they can do the unconventional (in this case, gay sex).

Show Me Love (Lukas Moodysson, 1998) continues this tradition, but, curiously, it’s directed by a man. This seems to liberate it from what we may term the “autobiographical trace” (which totally mars a film like Lea Pool’s 1999 Emporte-moi) giving the characters greater strength as characters. That the film has been a smash hit in its homeland Sweden only proves that its characterisations are rock solid. (The audience obviously responding directly to the characters, rather than being “entertained” by a genre film.)

The characters are still borderline-stereotypical, however: Agnes (Rebecca Liljeberg) is an “ugly duckling”, Elin (Alexandra Dahlström) a “hot chick”, Markus (Stefan Hörberg) and Johan (Mathius Rust) “insensitive males”. But Moodysson at least plays with these stereotypes – Johan has marvellous grey areas added to him, and Elin’s transformation from vain beauty to rebellious bi is very interesting. And if Agnes’ attraction to Elin is purely a physical thing, then at least that’s an honest characterisation on Moodysson’s part.

In fact, there is nothing really “sophisticated” about this film, at any level. The visual style is very basic, and employs a mild Dogme-like technique (a “realistic” technique that neither harms nor helps the film).

Show Me Love has such a simple, pure nature to it that any consciously lesbian and/or feminist polemics are non-existent. The film is so “unadulterated” that it almost comes across like a children’s film. This is obviously why a lot of audiences and critics have labelled it “charming” and “refreshing”.

And, yes, the climax scene is quite wonderful, although its second line of dialogue is overdone and unnecessary. The Swedish power pop soundtrack is also gorgeous. Overall, a wholesome, pleasurable film.