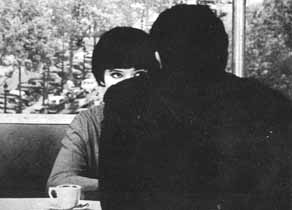 “I can say how I picture Godard. He’s a man who works a lot, so he is, necessarily, completely alone. But this is not just any solitude, it’s an extraordinarily populus solitude, populated not by dreams, fantasies, or projects, but by actions, things, and even people.

Vivre sa vie, Godard’s fourth feature and in tone the most poetic and ‘serious’ of his films to that date, opens with a quote from Montaigne, “lend yourself to others but give yourself to yourself”, before progressing through a series of shots of Nana (Anna Karina) talking to her friend, Paul, in a café. (The film actually ‘begins’ in its credit sequence, its half-lit, deeply shadowed mug-shot-like images of Nana’s face and profile, the snatches of music, the quote from Montaigne, the credits for the film, acting as something of a primer for the multivalent tactics and stylistic techniques that the film will utilise). In this first sequence, Nana’s face is not seen directly by the camera, we are behind her as the camera pans and glimpses her image in a mirror. In the process the camera invades and furtively ‘steals’ her image.

Essentially this initial fixation upon and investigation of Nana’s image, in particular her face, from a variety of perspectives, is the essence of Vivre sa vie. So despite its surface break-up into twelve chapters, its notation as a treatise on prostitution (from actual reportage), its essayistic and discursive qualities, and its extremely varied audio-visual devices, all elements which attempt to survey and understand the outside of the subject, Vivre sa vie is most candidly a ‘documentary’ of Nana’s image (and subsequently the image of Godard’s then wife, Karina). Elements such as Nana’s visual similarity to Louise Brooks, her emotional reaction to and identification with Joan while ‘silently’ watching Carl Dreyer’s La Passion de Jeanne d’Arc, and various other references to films and stars, highlight the cinematic self-consciousness of this work and its engagement with a history of images (cinematic, photographic, literary, etc.). The film itself becomes a record (similar in effect to La Passion de Jeanne d’Arc), a catalogue of postures, poses, gestures, everyday, real and performed actions. And also a record of the social, economic, sexual and cultural circumstances that lead to Nana’s situation and the philosophical and existential dilemmas she encounters. The film doesn’t exactly present an argument but rather a series of observations, approaches and reports denuded of many of the trappings of fictional narrative cinema.

In Vivre sa vie‘s penultimate sequence, Nana stands, happy and with her lover, head and shoulders against a wall, and framed next to a photograph. On the soundtrack her lover (dubbed by Godard) reads Poe’s “The Oval Portrait”, a tale of a painter’s obsession with a portrait of his wife. The story’s description of the process of painting emphasises the portrait’s ability to capture, replicate and steal the ‘essence’ of its subject’s life and character. In the conclusion of the story, and upon the painting’s completion the husband-artist draws back frightened, as next to the portrait his wife lies dead. Within Vivre sa vie the potential of such an ominous and tragic realisation seems to surround the image of Nana and even Karina herself, but it also reflects back upon Godard’s own practice (and points to the very real danger of such obsessive and personalised representation). Nana’s death to occur in the following scenes is already etched on her face, marked by the photograph that hangs next to her on the wall, foretold in the prose of her lover. Susan Sontag has taken exception to this scene in her otherwise glowing review of the film; “What is objectionable here is not the abruptness of the ending. It is the fact that Godard is clearly making a reference outside the film.” (2) Sontag’s objections appear to run counter to the nature of Godard’s cinema. It is plainly absurd to complain that Godard’s film makes references outside of itself when this is in fact (through quotation, intertextuality, collage, self-reference) one of the director’s, and the film’s, key aesthetic strategies. It is true, as Sontag states, that this scene self-consciously refers to Godard’s role as Karina’s director but this reflexive aspect is evident in numerous other details of the film (Godard is always multiply ‘present’ in the films he makes). Despite its melancholy romanticism, this superficially ‘pregnant’ moment does not stand out from the rest of the text but melds intricately into the intertextual, reflexive and multi-layered audio-visual scheme of the film. In the context of Nana’s character it is no more revealing, fatalistic or poetic than the quote from Montaigne, the strains of Michel Legrand or the story of the chicken which appears in the second chapter of the film (“Inside the inside you find its soul”).

Godard’s cinema is both highly recognisable and incredibly difficult to pin-down, sum-up, and even adequately describe. As David Bordwell states: “the real problem [of Godard’s films] is that they remain elusive on a simple denotative level”. (3) Thus we can interpret and read Godard’s films but they are often difficult to describe. It is also tricky to precisely think about and simply state the function of any particular thing or device. His films rarely develop a particular stylistic system or regime, creating, as Godard suggests, “a kind of tapestry”. (4) Thus, for example, the stark, descriptive chapter titles in Vivre sa vie divide the film up, lend it a literary quality, and yet they don’t really structure the work at all. The meaning applied to and use of specific stylistic devices varies from film to film, sequence to sequence. In keeping with this, Vivre sa vie‘s composition is seldom tight or exclusive in subject (except in the many close-ups of Nana’s face), and its aural and visual preoccupations shift while remaining extraordinarily fixed upon its central thematic concerns (the problems of communication, prostitution, the primacy of human will and representational transformation, commodities and commodity exchange). Essentially, there is no one way of reading or categorising Godard’s cinema or any one Godard film (is Vivre sa vie an essay, observational documentary, home movie or sociological tract?) but neither is his cinema purely elusive and ambiguous. Each of his films is of-a-piece and yet they can often seem as a collection of isolated moments; they are both dispersive and extremely contained.

Nevertheless, Godard’s cinema is characterised by a set of methodologies, thematic concerns and stylistic/aesthetic/philosophical choices and procedures. Principle among these are the notions of mixing and collage. For example, the soundtrack, and even the image track, of Vivre sa vie almost seem as if they are being composed as we are watching and listening. Although the film’s sound primarily documents and emanates from the same everyday world as the images (Godard’s use of synchronised, location-based sound and sound-mixing is legendary) it nevertheless insistently cuts in and out, while dialogue is delivered in multiple ways (including subtitles which at one point ‘fill in’ the deathly silent soundtrack). Among the other remarkable, maybe even revolutionary, qualities of Godard’s soundtracks are the use of ambient sound and composed music (which again cuts in and out, and only remains on the soundtrack in isolated ten to twenty second bursts). Nothing is irrelevant here. The description of any element as ‘ambient’ betrays the openness and potentiality of what his films offer. Thus, this sound (let’s call it ambient) contributes to the obscuration of dialogue in many parts of Vivre sa vie, but is as much the ‘subject’ of these scenes as the dialogue.

It is wrong to state, as some critics have, that Godard is an extreme stylist without a stylistic system (as it is also wrong to make this claim about Godard’s most significant contemporary disciple, Wong Kar-wai). The choices he makes illuminate his characters and situations, while specific visual motifs, for example the numerous backlit shots of Nana’s upper profile, give the film a degree of continuity. And yet, the film does demonstrate a kind of hyperactivity, a willingness to look at its central character from a mass of different of perspectives, angles and through conventionally distinct modes of cinema (observational documentary, meta-cinema, fiction, essay). It is in this sense that one gets the feeling of watching a filmmaker drunk on the possibilities of a newly discovered, and newly free cinema.

This may all make this sound like an overly flashy and insubstantive film, but Vivre sa vie is actually amongst Godard’s and the nouvelle vague‘s most intimate, moving, sustained and revealing works. The complex alternation between inside and outside, documentary and fiction, distanciation and involvement, actor and character, and what this asks of its audience, is the film’s most profound achievement.

Through its obsession with the image of Nana, Vivre sa vie becomes a kind of lingering or after-image – best characterised by the close-up of her face and the multiple ways it has been imaged than by the narrative, or any one of the stories it tells or perspectives it unveils. In the end what I most remember is the image of Nana (isolated, crying and cut adrift in the pure space of the frame), the face of Falconetti’s Joan, and the synthesis of looks, gestures and tears that characterises the scene revolving around Nana’s moving visit to the cinema (the cinema as ‘naked’ faces, bodies, space and emotion). Godard’s citation of Dreyer’s film is movingly appropriate as it helps single out what is most remarkable in Vivre sa vie. Both Dreyer’s and Godard’s films fragment filmic space, and the body, in similar ways and each provides amongst the most singular, painful and even cruel portraits of a character and actor on film. They both present female actors who show, give and nakedly reveal much more than we should ask for in the cinema.