Rossellini broke with the conventions of the classical narrative form which had dominated dramatic film from the introduction of sound in the late 1920’s. Almost all of the many personal styles of major film directors ­ whose differences are immediately and sometimes strikingly apparent to us ­ conform to the ‘rules’ of classical narrative. Up till 1960 the exceptions were few: Bresson, Dreyer, Ozu, von Sternberg and Rossellini are ones whose work we have seen in this country.

Classical narrative is a grammar, a practice, a system of rules for the construction of meaning. As with the grammar of our native language, the ‘rules’ are so familiar, so deeply internalised, that we need never be aware of them ­ until we experience the discomfort of hearing them broken.

‘Discomfort’ is the key word here; ‘bad grammar’ usually presents little or no problem of intelligibility ­ it simply distracts or possibly offends us. Why? Because it is unfamiliar? Are the habits we rely upon without being able to analyse so deeply ingrained? Yet we recognise that important discoveries and achievements in the arts over the centuries have entailed ‘breaking the rules’ ­ often to the dismay of contemporaries and the gratitude of posterity.

Perhaps Stromboli will seem more disappointing than discomforting. The story ­ at least until the ending ­ is easy enough to follow, the characters, their situations and motives, are clear; but the whole may seem to lack ‘depth’ or ‘finish’ (which were the early complaints against Cezanne when he broke the ‘rules’ and released so many opportunities for European painting). 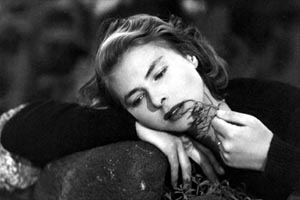 If we have a similar response to Stromboli it will probably be because we are trying to assess it by the very conventions it seeks to depart from. Classical narrative cinema has led us to expect that scenes will be built up in layers, ‘steps’ of ascending complexity and intensity of character interaction. This is usually structured by the dialogue and complemented by the mise-en-scene: e.g, the camera establishes the space of the interaction ­ and may at some dramatic points explore that space, cutting proceeds from group-shots to singles and from wider framing to tighter framing in keeping with increases in dramatic tension, going wide again as the tension is relaxed or resolved.

Classical narrative uses cinematic techniques but the impetus, the cue to use these techniques, still derives from theatrical conventions, especially in the process of building layer upon layer of dramatic information.

Rossellini directed Stromboli and other films of this period as though theatrical drama had never existed. His camera covers the action with few cuts or tight framings while the interaction between characters may seem ‘superficial’, lacking the familiar layers of development. Essentially he tells his story without expression: dialogue does not explore its subject matter, actors don’t ‘act’ so much as they ‘behave’, images are not ‘beautiful’ pictures of their subjects (though sometimes the subject may be intrinsically beautiful: land, sea, a human face, etc).

Rossellini moderates what might otherwise be too stringent a method: he chooses his moments to conform to the ‘rules’ ­ and not only moments but even an entire sequence, such as the extraordinary scene of harvesting the shoal of tuna (but that’s like a documentary? Then documentary has ‘rules’ too). But for the greater part of the film the narrative may seem to be merely outlined, not ‘filled in’. That was his artistic mission: not to sweep the rules away entirely, but to uncover a genuine cinematic experience which had been overlaid by the habits of another ­ related but different ­ art form. (Painters in the wake of Cezanne did something like this for perspective, composition and palette).

You may ask: if the rules are widely accepted, is there any need to change them? Yes, all art forms change, and need to change if they are not to become decadent ­ displays of hollow virtuosity. Artists raised in orthodoxy and successful because of it are in danger of losing contact with the original impulse of their chosen art form. Change may come by chance or by courageous purpose. Every art needs its Fauves ­ its sophisticated ‘primitives’ ­ from time to time, to flush out the clogged parts of an orthodoxy which may have outlived its justification (think of Matisse, Schoenberg, Lloyd Wright, Stein, Pound, Eliot, Beckett ­ Rossellini deserves to be considered in their company).

Stromboli ‘s lack of expressionism may help us to ‘read’ the film as an essay on the condition of Woman in patriarchal society at the close of World War Two. We first see a young woman, single, a ‘displaced person’, a prisoner because of her lack of identity. After a brief courtship conducted through barbed-wire she marries a prisoner of war, a man who is about to be liberated(!). The home he takes her to is isolated ­ familiar to him but inhospitable to her. She has exchanged one prison for another. She owes her identity to the stranger/husband/master; even beautifying their home is subject to his permission. The consolations of religion, motherhood and infidelity are each in turn proved empty. The only way to escape is to cross the volcano.

It may seem a paradox that the relative flatness of Stromboli‘s realism (and realism is a troubled critical concept) supports an allegorical interpretation. This analysis will serve until the final scenes when she sets out to traverse the terrifying mountain of fire and suffocation. Now allegory must give way to something else: metaphor.

While allegory articulates a rational correspondence between text and sub-text, metaphor seeks the emotional affinity between the depicted subject and the ‘real’ subject. For many of Rossellini’s generation (also Bergman’s ­ but that is another story), to walk out on a marriage is to cross a volcano. The fear and self doubt of the venture into the unknown and the unsanctioned is transferred from the one action to the other ­ emotionally, not rationally.

Rossellini now dispenses with surface realism (why is the fugitive not scorched? what happened to her belongings?) to evoke the reality of feelings below the surface ­ beyond the purview of camera technology.

Does she escape? We may not agree about this. Rossellini has left the ending transcendent but ambiguous. In that final gap in the narrative, we ­ as did the audiences of fifty years ago ­ may inscribe the ending we want. Our desire must complete the meaning of this film.

Sad footnote: A gratuitous voiceover (masculine, of course), as though intended for the moral protection of the American public, is heard at the very end, presuming to tell us what the ‘message’ of the film is!