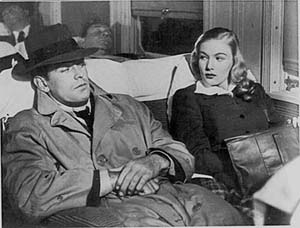 This Gun For Hire has been described as ‘one of the most important early films noir‘, and one that ‘helps to establish a number of conventions of the genre’. (1) The film’s enduring significance lies in its influence on a particular subset of classic and post-classic noir films featuring the figure of the lone assassin. Directed by Frank Tuttle, himself something of a Paramount Studios gun for hire, the film’s exploration of the last days of a solitary, embittered hitman reverberates through everything from Jean-Pierre Melville’s Le Samourai (France, 1968) to more recent meditations on the form – Luc Besson’s The Professional (USA, 1994) and Jim Jarmusch’s Ghost Dog (USA, 1999).

Scriptwriters Albert Matz and W.R.Burnett adapted Graham Greene’s A Gun For Sale (1936) to the American screen, transposing the original story of a London hitman to the emblematic noir territory of San Francisco and Los Angeles. Greene’s Phillip Raven is ‘dark and thin and made for destruction…a screwed-up figure’ with a ‘repulsive’ hare-lip, who is contracted by a wealthy industrialist to kill a socialist minister. (2) In the Paramount scenario, Alan Ladd plays the considerably less disfigured Raven, hired to dispense with a blackmailing industrial chemist in the employ of chemical tycoon, Alvin Brewster (Tully Marshall).

Matz and Burnett embellished Greene’s left-leaning political thriller with some definitively American elements, not the least of which was the incorporation of prevailing American propagandist sentiments. Mid-shooting schedule, this inter-war production was thus able to graft an overt anti-Japanese discourse onto Greene’s narrative of political intrigue. Tellingly, the American script also transforms Greene’s wealthy industrialist Sir Marcus into a monstrous figure of capitalist corruption. Brewster (‘King Chlorine’), a desiccated, wheelchair-bound tyrant, has been read as a thinly veiled portrait of Henry Ford. (3) On a more minor note, Matz and Burnett give Raven’s brutal existence a new and thoroughly contemporary Freudian motivation – he kills to avenge his own abuse at the hands of a unforgiving aunt.

This Gun for Hire unfolds with workmanlike efficiency. Raven is established as a reprehensible killer. His Spartan way of life and implacable approach to the business of killing are amusingly contrasted with effete executive and nightclub owner Willard Gates (Laird Cregar). Gates’ corpulent figure and abhorrence of violence make him an unlikely middle man in the criminal hierarchy that extends from Raven to Brewster. Gates’ decadent tastes (‘leg shows’ and chocolate mints!) and affected manner are played up by Cregar with camp relish. His craven, thuggish sidekick Tommy completes the vaudevillian effect.

Where Raven’s name signifies his dark, predatory attributes, his nemesis Lieutenant Michael Crane (Robert Preston) bears an appropriately innocuous avian-inspired moniker. Crane’s cop is a colourless character whose half-hearted pursuit of Raven and dreary attempts at romance only serve to foreground the genuine frisson developing between his quarry and his girl. Ellen Graham (Veronica Lake) is a thoroughly overdetermined femme fatale who is by turns, Crane’s devoted fiancee, a nightclub singer and employee of Gates, a US secret agent and Raven’s accomplice and ‘friend’. She and Raven become increasingly entangled in the Nitro Chemicals political and criminal racket. They share a risque night together as ‘strangers on a train’ and establish a rapport on the run that arguably counteracts the film’s final, unconvincing and over-emphatic clinch between Graham and Crane.

True to the spirit of the dangerously seductive noir femme, Graham ultimately betrays all the men she comes in contact with­all of course in the service of the collective good of the country. Given that her character is forced to bear the considerable weight of the script’s heavy-handed patriotism, Lake’s performance has historically been damned with faint praise. She is nevertheless, a luminous presence in the film.

If the protagonists in This Gun For Hire are typical of noir, Tuttle takes his time consolidating the film’s formal credentials. Early scenes are characterised by a certain prosaic quality. The mise en scène is decidedly non-noirish, with fussy interiors and indifferent, low-contrast lighting. Action consistently takes place in daylight and locations are seemingly benign ­ Raven’s hotel, a cosy cafe, the busy street. But as the narrative unfolds and Raven becomes embroiled in the unforeseen political repercussions of the ‘hit’, the lighting regimes and locations shift accordingly. Raven becomes hunted rather than hunter and increasingly inhabits the seedy nightclubs, train stations and oppressive urban locations that constitute the natural habitat of the beleaguered noir protagonist.

In the latter stages of the film, the police track Raven and Graham down in the wonderfully expressive environs of a deserted gasworks at night. Thoroughly apposite given the film’s thematic preoccupation with the malevolent potential of industrial development, the gasworks is also a penultimate noir location. Cinematographer John Seitz makes the most of this dramatic backdrop using the enigmatic play of shadows on built form to impressive effect. Raven’s descent into the dark interiors and subterranean spaces of the factory metaphorically registers his decline into a desperate and increasingly fragile psychological state. The cavernous spaces of Nitro Chemical’s faux Grecian temple headquarters likewise affords an atmospheric noir location in which to emphasise the obscene scale of Brewster’s evil empire.

Ladd’s performance as Raven, his first major role, is generally credited with establishing him as a bona fide Hollywood star. His sculpted features and deadpan persona give his character a glacial appeal, an appeal that as one critic has noted, is precisely mirrored in his co-star Veronica Lake. ‘Their unblemished beauty has a manufactured quality; they look like a mogul’s idea of what American movie stars should look like…perfect icons, in fact, for the world of forties noir’. (4) The visual contrast of Ladd’s dark, brooding impenetrability and Lake’s flawless blonde appeal proved to be an audience-winning combination. The two stars went on to collaborate in other notable noir films­The Glass Key (USA, 1942) and The Blue Dahlia (USA, 1946).

While Ladd’s Raven is memorable in many respects, his performance will principally be recalled as the source of inspiration for another, justifiably more famous lone assassin­Jef Costello. In Le Samourai, Melville’s paean to the solitary hitman, the influence of Tuttle’s film is manifest. Ritualistically dressed in trenchcoat and fedora, first made emblematic as the hitman’s attire of choice in Gun, Alain Delon’s frigid charisma owes much to Ladd’s earlier incarnation. (5) From Costello’s methodical modus operandi as hitman, to the centrality of the nightclub singer, a veritable angel of death, Melville makes clear his unabashed debt to this early ’40s noir film. In this way, This Gun For Hire ultimately makes an important contribution to what Foster Hirsch has described as ‘the long and ongoing dialogue between French and American strains of noir‘. (6)