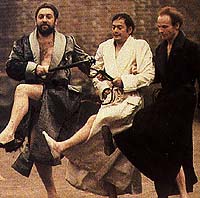 based on:
Les cents-vingts journées de Sodome (The 120 Days of Sodom)
by The Marquis De Sade

Pasolini took a risk with Salò, and, for that, we must love him. He dared to combine a number of impulses (some personal) in a way that would leave him open to charges of irresponsibility, provocation and misjudgment. Indeed, even his death (in the weeks after completing the film) is still shrouded in mystery, many believing he was ‘killed off’ by certain political machinations.

As an act of cinema, Salò goes to the extreme of propriety. It lacks taste (or: it tastes of shit) and it harbors no illusions. Its portrait of fascism-cum-sadism is merciless and unforgiving, and charged with both anger and complicity. Just as Sade wrote his infamous novel in a manic state of frustration-induced fantasy whilst imprisoned, Pasolini made his film in reaction to what he saw as capitalism’s ever-increasing power (die-hard communist that he was). But Pasolini also threw his homosexuality into this brew of elements, and his love of innocence (eternally emblematised of course by Ninetto Davoli), creating, let’s say, a very complex film. In some respects, Pasolini (as a free-thinking, free-acting artist) was like a Sadean libertine: he would cruise the streets at night looking for young men to hit on (it was one of these lads who ended up killing him).

Ultimately, however, this background doesn’t matter: the film stands on its own as an anti-fascist and anti-power statement, if a somewhat raw and confronting one. Never have abusive power and bourgeois decadence been given such full reign within a single film. The question is: how do you attack fascism? By being against it, or by showing it in all its “glory”? In this sense, Salò is a clear precursor to serial-killer-study films such as Henry: Portrait of a Serial Killer (John McNaughton, 1986) and Sombre (Philippe Grandrieux, 1998) in the way its gaze at its subject is unflinching and detailed.

At the very extreme of something, there is always a dead-end – straight lines don’t exist any more, only circles. In Sade, the dead-end is geographical; in Salò, historical. Both places are ones of death.

The terror of Salò is that it makes little attempt to humanise the victims. But that does not mean that these victims are not human or that Pasolini does not care for them. Pasolini’s rigor in sticking to examining the situation at hand is admirable: he avoids any unrealistic detours. These are victims. In these teenage faces, Pasolini has captured something we can see on teenage faces around us today, and something all too rarely seen on the screen: the human spirit flattened by the abuse of power. (Pasolini’s eye is actually very precise and rich. He casts like a magician. The four Masters in Salò have suitably vile faces.)

In the horrible world of Salò, there is no place for compassion. The Sadean philosophy inverts normal human values and exchanges. If a victim cries, that only feed’s the oppressor’s delight – there is no such thing as pity or sympathy in the Sadean world. A victim can only be a victim, nothing else.

But Pasolini doesn’t follow Sade all the way – he subverts these power hierarchies. He even humanises one of the Masters, by making him fall in love with one of the soldiers. And then there are the other moments of genuine interaction between people: another soldier and a maid; two of the girl victims; and, of course, the two boy soldiers at the end. (A strange and touching conclusion to an ugly and difficult film.)

Sadism, of course, needs victims, it cannot actually kill them; but killing them, naturally, is what must happen. And a fresh batch gets brought in. And the numbers mount. Six million of those, three of those, etc. In the end, the circle of victims expands to include the oppressors – they may run and hide, to bunkers, to Salòs, but they cannot escape. They cannot live.

Pasolini lived in both the world of streets and the world of books. When he discovered the cinema, he embraced it with a passion because it allowed him to combine these twin loves of reality and literature. He made his first film, Accatone (1961), when he was 39. He died at 53. (Obviously not a long and sustained career á la Fellini, but certainly an intense and brilliant one, like Fassbinder’s.)

Along with being a film director, Pasolini was a novelist, poet, theoretician and journalist. He was clearly not a ‘purist’ or ‘specialist’ when it came to those writings – his love of words was a full-bodied, pluralistic one. And he was prickly. He made enemies.

As a filmmaker, like Rossellini, Pasolini started off in contemporary neo-realist mode, then went satirical, then ethnographic (both made trips to India), before settling on a historical mode. For Rossellini, this meant studies of important historical figures (Louis XIV, Descartes, Pascal, etc.). Pasolini adapted a couple of Greek tragedies, and then made his commercially-successful La trilogia della vita (The Trilogy of Life) comprising Il Decamerone (The Decameron, 1971), I racconti di Canterbury (The Canterbury Tales, 1972) and Il fiore delle mille e una notte (Arabian Nights, 1974). This Trilogy is full of a thousand and one stories, and it is so different to the rest of Pasolini’s work: excessive, rich, funny, joyful, fast, casual.

Salò too is structured around the notion of ‘stories’, but, in this case, the telling of them, not the blissful cinematic realisation of them. (If Pasolini had attempted such, the film wouldn’t’ve made production stage, let alone banning stage.) Thus, even this age-old human device of using stories as life-enriching tonics is subverted by Pasolini in Salò. So familiar with the power and life-energy of ‘stories’, because of his Trilogy, Pasolini gave this power its negative or inverse coefficient in Salò, simply because he knew that evil, too, feeds off stories.

But it is crucial that it is the telling of stories that exists in the film, and not their realisation. This is the ghostly side of stories – that they are told after the event. It ties in with the way the word ‘fantasy’ sometimes connotes a negative state. The Masters in Salò in fact need stories because they are dead. They have transgressed humanity to the point where they’re out of touch with their own stories. They are divorced from life.

Undoubtedly some of the vitriol thrown Pasolini’s way in response to Salò was caused by the film’s rough-hewn style. There is nothing ‘intelligent’ or ‘well-crafted’ about the film’s stylistics. This is not a Visconti we’re watching.

All his cinematic life, Pasolini was obsessed with the capacity of the film image to impart reality/truth, and to do it with a shock. He was interested in an image’s poetic qualities too, of course, but for him these things were symbiotic. It is the immediacy of his images combined with the realism of his design elements (settings, but also actors) that cause such consternation for viewers when watching his films. (But Pasolini can also be turgid and lifeless too, as films such as Oedipus Rex [1967] and Medea [1970] demonstrate.)

Pasolini was obviously a restless and adventurous filmmaker, going through more periods in his 15-year career than either Godard or Rossellini did in their much longer careers. Salò feels more like Accatone or Mamma Roma (1962) than any of his latter films, in its abrupt, scatter-shot form. Far from being informed by a strict formalism, or formal strictness, as some commentators suggest, the film flies about all over the place, making it quite an exciting viewing experience. The fascistic rules and the ordered salon (where the story-tellings take place) are constantly broken, if not by the characters, then by Pasolini’s camera.

Camera-placement and editing are eclectic to the nth degree in Salò. Wide or close shots come in unexpectedly, the POV changes abruptly from Master to victim to soldier to madame, etc. The torture sequence near the end has been justly praised for its use of the POV shots of each Master as he sits at a throne by a window looking through binoculars at the ‘action’ in the yard below. But the other shots in this sequence, i.e. the ones showing the Masters looking – banal, simple shots – are just as scary. One camera position Pasolini chooses is exactly 90° to the throne’s position, and this is a particularly effective shot.

And so, Pasolini’s camera is not only on the whole situation (rather than on the victims), but also particularly on the bastards who run the whole show and execute proceedings. Some serial killers in recent years have videotaped their crimes and have undoubtedly enjoyed watching-back these tapes. But would they enjoy it if the tapes were screened publicly (let’s say, for argument’s sake, that these tapes also included the killer’s preparations, interactions with people, etc.)? – Maybe this is the value of Salò.

In an age where the Holocaust has been constantly explored, investigated, discussed in both fiction films and documentaries (in an attempt obviously to deal with and resolve it), there are any number of other things that the cinema could at least make an initial stab at but doesn’t. What about the Mafia, by now endlessly stereotyped and commodified in the movies? Or an issue such as child abuse?

Salò is a film of extremes, but a film of love. The night he died, cruising for boys, Pasolini was not a twisted, cynical loner, desperately looking for meaning. He had dined out earlier in the evening with Ninetto Davoli. He was concerned (about capitalism, the media, corruption). He was active and passionate. He was looking forward. He died and Salò premiered several weeks later. Don’t expect to see it again too soon in Australia, though.