Amanda Kramer’s Give Me Pity!, screening this year at MIFF, offers a hyper-real, hyper-saturated, and at times nightmarish portrait of one women’s desire to “make it” in life and on Prime Time TV. Landing somewhere between a pastiche and satire of late-disco era television variety specials, Give Me Pity! is a musical, come feminist performance art, come psychological thriller. This televised emotional breakdown blends genres and nostalgia for saturated cathode-ray aesthetics to produce a film that is at once deranged and captivating.

Give Me Pity! is the title of Sissy St. Claire’s largely one-woman variety show airing on prime time network television. The Saturday night television special is seemingly a sign that its star has finally “made it” –  much like Jesus did, as Sissy (played with mastery by Sophie von Haselberg) points out, “Jesus and I are both big entertainers. We have our iconic look, our enduring presence, everything that makes us memorable”. Yet as the film progresses, the certainty of Sissy’s ascendancy is undermined as the glamour of the well-ordered broadcast slips and a more disturbed and deranged emotional state comes to the surface.

Von Haselberg’s Sissy begins as the epitome of the late-stage female entertainer come TV special host – a figure we have been reminded of recently through such characters as Deborah Vance (Jean Smart) in Hacks (2021-). She’s narcissistic, self-assured, self-deprecating at the right moments, and a little flirty – always playing the audience for laughs and applause. Sissy is a figure who craves the limelight and the adoration that follows. As she confesses right from the start: “I’m also dying to be known, really known, by the people that love me, by each and every one of you”. This declaration underpins the confessional style of the TV special format, with the star inviting the audience in to “see them as they are”, albeit through a highly stage-managed and self-reflexive lens. So too does Sissy invite us to get to know the “real” her, through her hopes and dreams. Yet the charm of the choreographed glimpses behind the star’s persona takes a turn when the confessions become increasingly darker, raw, and confronting.

The veneer of mediated broadcast reality is pushed aside, both by Sissy – though overly candid confessions about her childhood and traumas – and through technological glitches and backstage ghouls that haunt the broadcast. A letter-reading segment turns malevolent before being salvaged by a bout of American patriotism and a rendition of “You’re a Grand Old Flag,” while psychic readings and a moment with a puppy reveal a little too much of the star’s insecurities. Fears of being forgotten, overlooked, alone, and unloved plague Sissy, with her insecurities derailing segments that increasingly descend into the surreal and the absurd. All the while, canned applause encourages the star to carry on with her show.

The decent into psychic trauma that is revealed speaks not only to Sissy as the epitome of a type of celebrity, but to broader societal contradictions that plague women as objects of (male and internalised) desires. An initially amusingly sexy number entitled “Wife Hooker” becomes an unsettling commentary on double standards and abuse, with awkward laughter hinting at a crumbling façade of the broadcast moment. Meanwhile, a fixation on beauty standards sees the star transformed and transfigured from the angelic into the grotesque. An abundance of reflections from mirrors within mirrors to sequined outfits and mirror balls lend themselves to reading into Sissy’s travails a Lacanian lack, which play out in Sissy’s searching desires as well as in copious lens flares which cast a dreamlike aura over the world of the set. The resulting assemblage begs the question of how real, or real to whom, this TV special truly is. Are we watching a wildly off-kilter broadcast of an unstable star, or the self-sabotaged imaginary of a lonely dreamer? 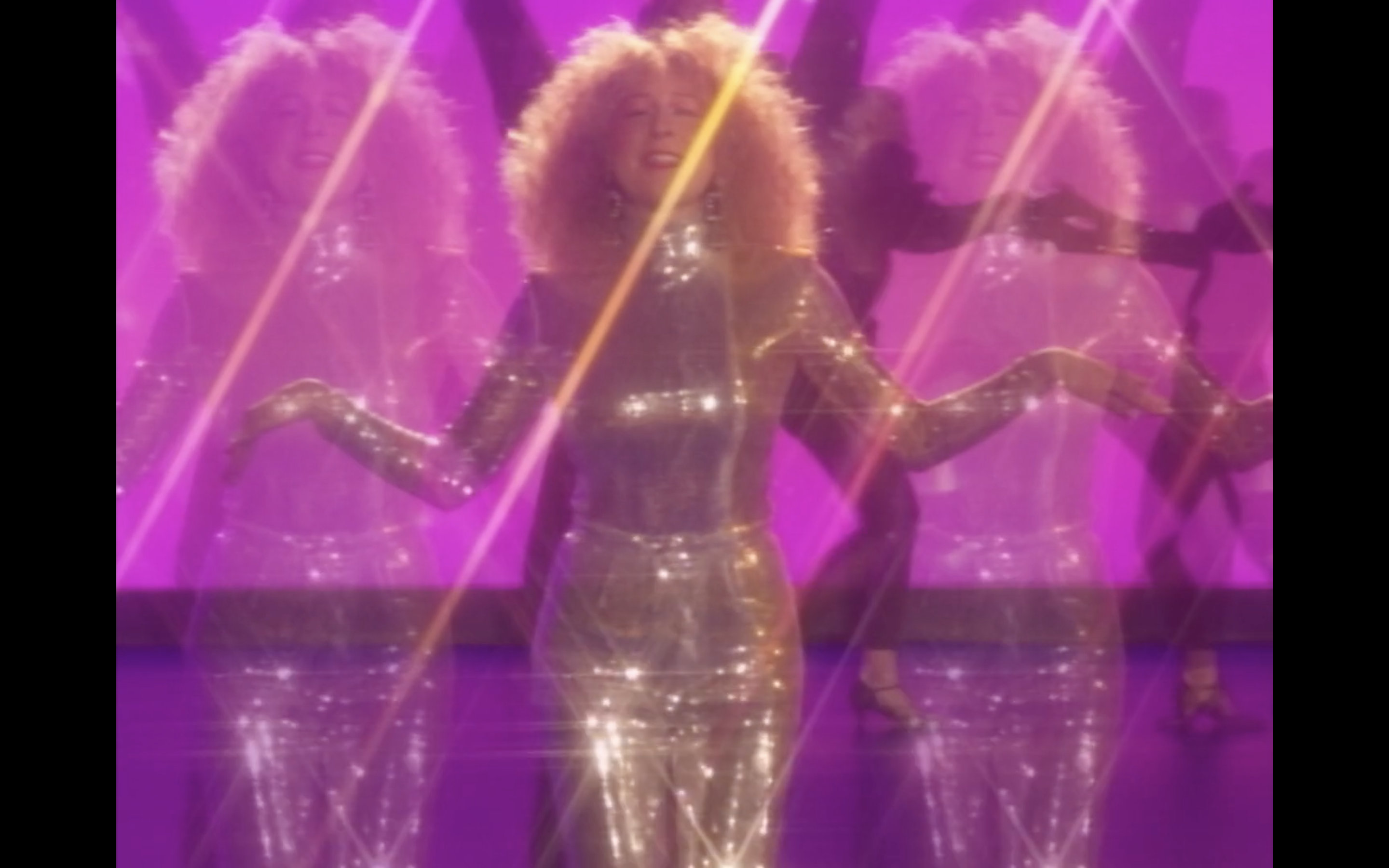 Give Me Pity! marks Kramer’s fourth feature film, all released since 2018, and her second feature for 2022. Kramer’s other release for this year – Please Baby Please – premiered as opening night film for the International Film Festival Rotterdam, while Give Me Pity! closed out the festival and its showcase of Kramer’s work. The film builds thematically and aesthetically on Kramer’s earlier works, and most notably her short films, which richly explore themes of alienation, insecurity, and disillusionment, presenting characters that are intriguing if simultaneously distancing. Kramer’s unique style carries through into Give Me Pity!, even as the intense neon-drenched video aesthetics sit somewhat apart from her earlier muted colour palettes.

Alongside Kramer’s aesthetics, the film features a well-crafted musical score by Josh Ascalon and original songs by Giulio Carmassi and Bryan Scary, who together capture the tonal nostalgia of the era while adding eerie discordant elements to the familiar disco vibes that aptly echo the cloying, yet jarringly tense, cacophony of the film’s visuals. Add to that von Haselberg’s captivating performance as the increasingly deranged star of Give Me Pity! – herself a daughter of show biz royalty in Bette Midler – and the resulting film is a cinematic trip worth taking.