Yugoslavia was dismantled three decades ago after a series of deadly armed conflicts that encompassed all republics of the former state. Yet the question of the Yugoslav wars’ representation in contemporary documentary cinema still stays apt. This essay is concerned with one of the attempts by documentary filmmakers to account for the traumatic Yugoslav history. I will discuss the short film A Kosovo Fairytale (Anna-Sofia Nylund, Samantha Nell, Mark Middlewick, 2009), created by an international group of film students studying in Finland, which premiered at the Kettupäivät festival in 2009.1

A Kosovo Fairytale is an animated documentary – a form of film that uses animation to present factual content. It tells a story of a refugee family of both Albanian and Serbian heritage, the Neziris, who had to flee Kosovo after the outbreak of war, leaving their youngest child behind in the process. By combining live-action recordings of family members recounting their struggles of forced migration with cutout animation, the documentary provides an insight into the experiences of Kosovans dealing with the consequences of the ethnic conflict. One of the film’s unique features is the active collaboration with its subjects – all animated characters and sets are based on drawings made by the Neziri family members. In that, the short’s hybridity and the specificities of its production process prompt a question: what can animation offer to the depiction of war, memory, and history?

In her now seminal book Animated Documentary, Annabelle Honess Roe asserts that the form of non-fiction animation possesses unique aesthetic qualities that allow it to show occurrences unavailable for conventional live-action depiction2. Animation’s affinity with metaphors, fantasy, and imagination opens new possibilities for representing inner subjective experiences and effects of certain traumatic events on filmed subjects. Not being bound by existing historical records, animated documentaries can explore invisible aspects of reality not just by recreating missing documentary footage but also by reconstructing the reactions and feelings of the people involved. In that, the form of non-fiction animation reconnects personal stories with history at large.

A Kosovo Fairytale starts by showing an animated map of Kosovo comprised of newspaper clippings. The introductory image contains changing text that provides context for the documentary. It reads: “Kosovo fights for independence from Serbia. Thousands of Kosovans flee the country. Violent clashes between Kosovo Albanians & Kosovo Serbs. War breaks out. Finland takes in Kosovan refugees. Serbia says ‘No’ to Kosovo independence. Finnish laws leave refugees in state of limbo (sic). Ethnic tensions continue to simmer.” Kosovo’s outline drawn in charcoal eventually morphs into a bird flying away from the newspaper background. Doing so, it leaves a blotchy black trace symbolizing Kosovans escaping for safety and implying the all-encompassing chaos of war. 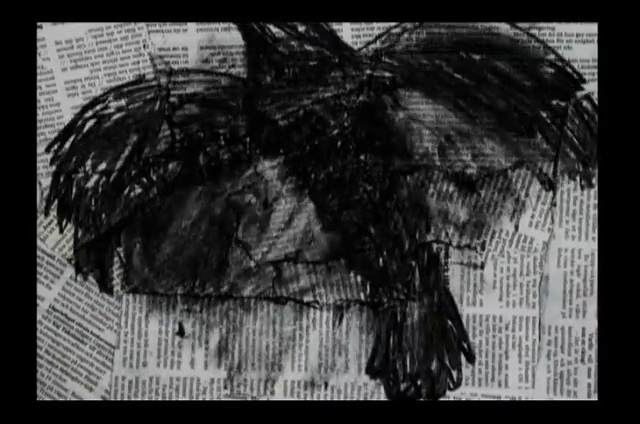 The introductory images conclude with the film’s title presented in a font resembling a child’s handwriting. It is then followed by a low-resolution recording of a Skype window open on an old computer screen. There, we see a young boy sitting on his grandmother’s lap. His jerky movements point to the instability of the internet connection and emphasize the distance between him and other family members addressing him from the other side of the screen. In the background, we hear the tearful voice of his mother. Slowly and quietly, she says: “I’m praying to God that when you grow up, you’ll understand.” 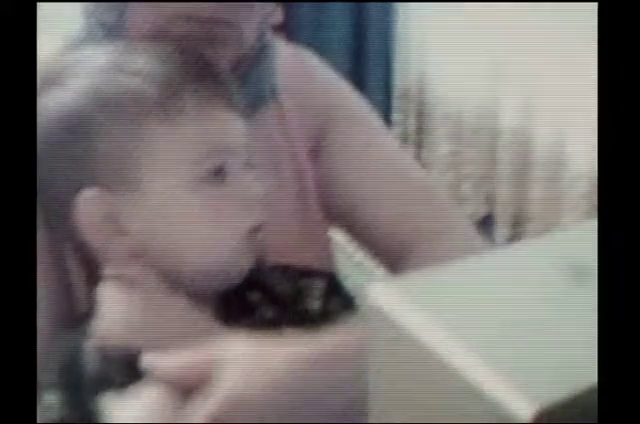 The child’s name is Albin. He is still in Kosovo. He was too young to travel safely when his family decided to flee the country. The Neziris hope to one day reunite with their youngest, yet at the time of filming, they do not know when this might happen. The documentary thus becomes an outlet for the family to process their grief and channel their love for Albin in a way that he can comprehend at his age. It gives them an opportunity to write and preserve the story of their family and position it within the larger historical context of the ‘90s.

As mentioned previously, A Kosovo Fairytale is a hybrid animated documentary created by combining live-action recordings with cutout animation. The animated part is integral to the structure of the short as it illustrates a handmade fairytale book that the Neziris prepared for Albin. Animated scenes are sandwiched between two live-action sequences that show the Neziris’ residence in Finland and present their heart-warming monologues directed at their youngest family member. I argue that it is precisely the aesthetic properties of material-based animation that allow the creation of a visceral representation of the Kosovo conflict while also challenging conventional ideological structures of documentary cinema.

The animated characters of A Kosovo Fairytale are all based on self-portraits created by the Neziris. In the first part of the film, we see the whole family sitting around the table in their Finnish home making drawings of themselves. In a video about A Kosovo Fairytale’s production (publicly available online), the film crew explains that open collaboration with their subjects was the only way to ensure the authenticity of the story told.3 In letting the Neziris design their animated figures and write the film’s script, the filmmakers were able to preserve the intimate connection between cinematic images and reality. 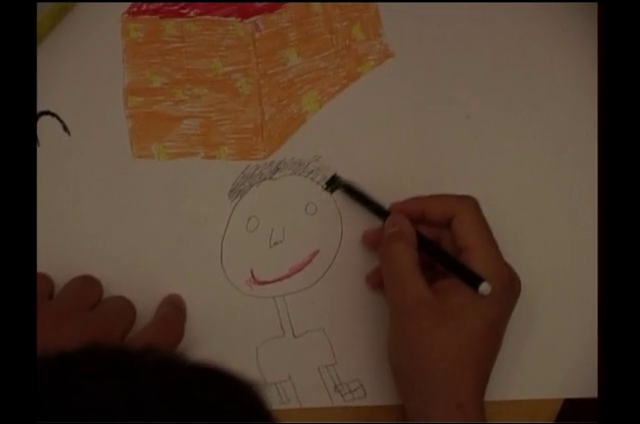 A Kosovo Fairytale – Drawings created by the Neziri family

Samantha Moore suggests using the term “the collaborative frame” to describe this type of creative process in the animated documentary context.4 Moore argues that the use of the collaborative frame challenges the deceivingly objective perspective of conventional documentary cinema, offering instead “a respectful, accurate and authentic representation of human experience.”5 By allowing their participants to lead the production process of animated sequences, documentary animators who opt for this type of collaboration give agency back to their subjects. With this, they push against the outdated utopian ideal of the objective documentary image and question the necessity of the live-action camera’s clinical gaze for documentary storytelling. In other words, non-fiction animation that uses interactive methods of production reminds us of the limitations of any cinematic representation of reality. Moreover, it validates testimonies and subjective experiences as means of accessing and enriching historical narratives.

Made by hand, the cutouts and backgrounds of this short also point to what Paul Wells calls “the evolution of materiality.”6 Wells asserts that in re-animating material things for narrative purposes, object animation reconnects itself to the world that we live in.7 It encourages the audience to consider not just the form, texture, or shape of presented artistic media, but also their historical meanings and the associations they trigger.

In the case of A Kosovo Fairytale, the materials used for the film’s mise-en-scène are similar to those often used for various arts and craft projects. For example, cardboard backgrounds coloured with acrylic paint are contrasted with rough textures of ice-cream sticks that form doors and furniture of the animated set. Similarly, the main characters, represented with monochrome paper figurines, cannot but bring attention to their own two-dimensional nature. Their limited range of motion is combined with clearly visible shadows that the cutouts cast on other objects on screen. The very physicality of these animated props thus prompts a comparison with cheap and easily accessible artistic media. It also resembles the peculiar aesthetic often associated with different modes of storytelling for children: illustrated books, puppet cardboard theatres, and the like. 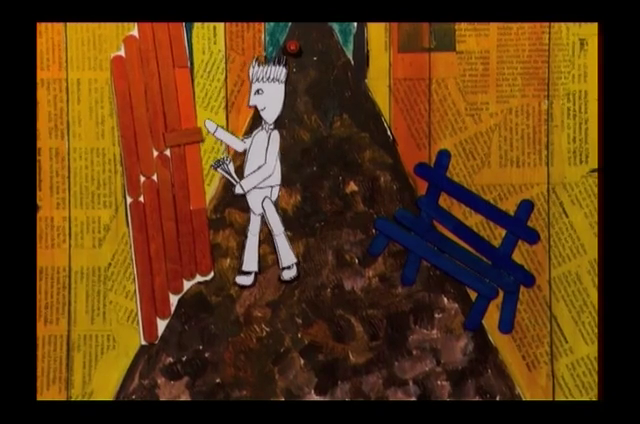 A Kosovo Fairytale – An animated character of Sami knocking on the door of Elvira’s family; the shot highlights the contrast between cutout figurines and wooden ice cream sticks 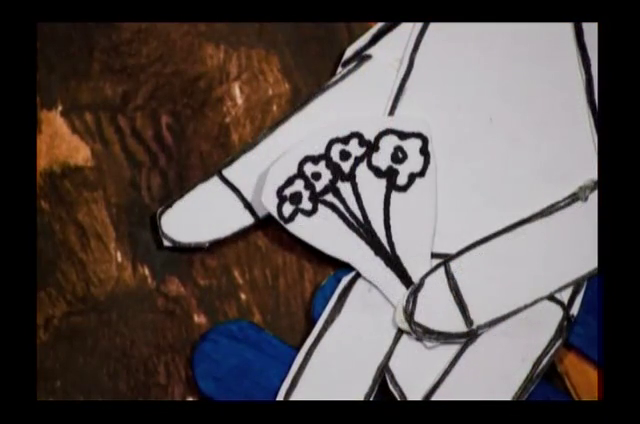 Anna Forné draws a connection between objects associated with children’s experiences and memory processes. She claims that children’s toys often function as a “technology of memory”, meaning that objects associated with childhood create and share both personal and public recollections of certain events.8 While not showing signature toys of that period in Yugoslav history, the objects used in A Kosovo Fairytale nevertheless represent the sense of scarcity triggered by economic and military developments in Kosovo in the ‘90s. By highlighting the physicality of its props, the animated documentary thus positions its narrative within a very distinct historical context – there, the fulfillment of artistic and storytelling needs has to be achieved through the use of materials available at hand. 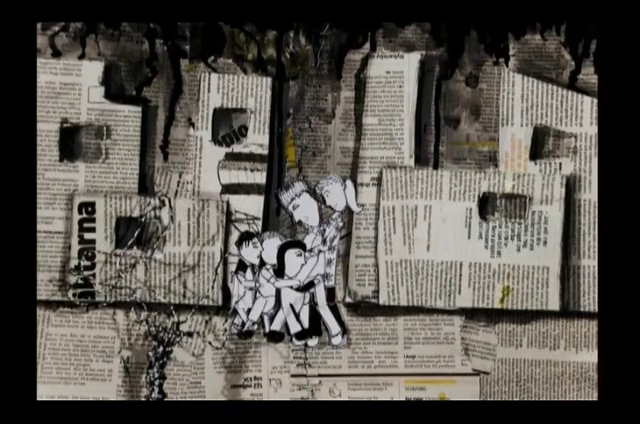 Overall, A Kosovo Fairytale proposes an alternative approach to representing the Kosovo conflict compared to its live-action documentary depictions. By giving voice to the victims of the war themselves, it rejects a conventional documentary structure and, in that, provides a space for the Neziri family to share their experience of forced migration and family separation in a more humane manner. In a way, the short adds a personal touch – literally and figuratively – to the images it presents. The very materiality of the cutout animation used to tell Neziris’ story emphasizes the labour that went into its production, at the same time as reminding the audience of an intimate and unbreakable connection between reality and its animated representations. Thus adding to the developing field of animated documentary, A Kosovo Fairytale shows a variety of ways animation can achieve a sense of believability. It proves that empathetic engagement provoked by the use of handmade animation techniques can be a more powerful tool for documentary storytelling than the employment of indexical imagery.