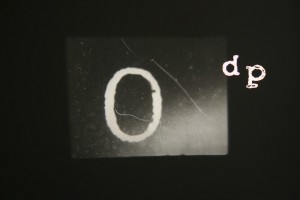 The nonsensical title of this series of audio-visual works presented over two evenings during the 2008 Melbourne International Film Festival by Melbourne’s Greyspace in association with OtherFilm, a Brisbane outfit, was less productive than the organisers might have wished. At best, it signalled a theatrical context: at worst, it raised the idea of narrative. Both notions might have been better left at the top of the stairs to this very agreeable 19th-century warehouse space in the city.

Friday night began with a bang. Vijay Thillaimuthu’s single-screen Synaethetic bounced off the walls in pulsing horizontals of light and heavy-voltage electronic sound generated by signal feedback from the image-maker’s saxophone-playing. With the promise of so much to come – film and video projectors, laptops and mixing desks were everywhere – this extreme sensory stimulation made you want to keep moving about, or, on the part of at least one of the visiting UK filmmakers, to dance.

And a dance of a different sort followed – choreography for camera in a huge, double-screen DVD projection of two young men in conversation in a domestic setting. Through live, digital, image and sound manipulations, Corey Sands and Keith Deverell (aka SONE) succeeded in unsettling this initially banal footage. With its degraded black-and-white surface, Conversation #2 was strangely anxiety-producing. Indeed, the only element of theatrical drama in this first program came from the quite spurious feeling of something being withheld in the relationship of the protagonists – a material effect of sound and image manipulation and not inscribed in the action.

Veteran Melbourne filmmaker Dirk de Bruyn (with aural support from Sophie Brous) dominated the space with Inside the Outside, a gloriously anarchic, three-screen, gestural and sound-poetry performance. De Bruyn, bent over and mouthing into a microphone like a demented seagull, appeared totally involved in the relentlessly unravelling collage of home-processed footage. There was no storyline: this was film inside, outside, whatever way up.

Unfortunately, the live commentary to US filmmaker Ben Russell’s The Black and White Gods was lost in his muffled performance presented standing beside the projected image. Filmed protagonists with comical props enacted clichés of ethnography in footage from his The Red and the Blue Gods (2005), which was seen with looped black-and-white footage from an earlier film, Daume (2000). Ethnography and its transgressions is clearly an abiding interest of Russell’s and a rich vein in which to be working. The provisional look of the whole is a visual trope apparent in contemporary art galleries worldwide, it seems.

The second program in the series was marred by technical difficulties, impacting especially on the presentation by Brisbane’s Sally Golding performing with musician Joel Stern (together aka Abject Leader). Most successful of the three pieces attempted was Face of an Other in which horror images, including a skull, were projected onto the beautiful young face and torso of Golding who stood motionless in the beam of light. Looking like a cross between a Victorian doll – the sort with soft bodies and limbs and porcelain faces and extremities – and a 1920s vamp, Golding literally “took on” the horror tradition to great effect.

This early evening session ended with four works by Guy Sherwin (presented with the help of Lynn Loo). Cycles #3 (1972/2003) almost blasted a hole in the brick wall on which it was projected. This was a twin-projector version (superimposed images, one through an amber gel) of a film made in 1972 without using a camera: holes were punched into a length of clear film and paper dots stuck onto it, including onto the optical sound edge of the stock thereby producing a percussive sound. In projection, the sizes of the slightly out of register dots from the two projectors were manipulated by the filmmaker. The pulsating centre of the screen sometimes appeared as a dazzling void, sometimes as a ghostly surface. This experience of pure film viewing was given a thunderous reception. As was another optical film, Vowels and Consonants (2005), enhanced on this occasion by live vocal sounds by Christina Tester. 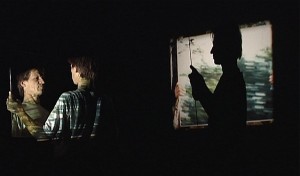 In a very different key, Sherwin mirrored the actions of his younger self in Man with Mirror (1976/2008). What was once a clever play between real time and filmed time has become a poignant image of time passing. Whereas Golding projected herself forwards into death and decay (in Face of an Other), Sherwin interacted with the projected image of his young self. While many viewers were enchanted by the artfulness of the piece, only the most callow would not also have had thoughts of human frailty: “ars longa, vita brevis”.

Human weakness rather than frailty was exposed in the final program of the series. In Steven Ball’s Personal Electronics, risible US video blogs that demonstrate their makers’ paranoid delusions were combined with live voiceover from Ball. But it was hard to say whether his first-person description of social dislocation was meant to support or critique the found accounts. This was partly to do with Ball’s delivery of the lines, which were pitched at the level of private musings.

Unfortunately, there was no mistaking the slapstick humour of the short mime, The Feast (by Jon Pak, directed by Danelle Lee, produced by Bee Amulundun) that started this session. It failed miserably, despite the enormous potential of Pak’s use of contact microphones and his software to hugely magnify incidental sounds.

Brisbane video mixer Botborg closed the program and the series, certainly not with a whimper, but, in returning us to the sort of extreme audio-visual environment generated by Thillaimuthu at the beginning of this six-hour international flickerfest, Botberg’s work suffered in comparison. An ineffable element of human vitality was apparent in the former – something to do with Thillaimuthu’s live sax playing, I guess – that was absent from Botborg’s ridgy-dig feedback work produced with his Photosonicneurokineasthograph instrument.

Intermission was exhausting. But don’t get me wrong: if you weren’t strung out by the close of business on Saturday then you had probably nodded off at some point (jetlag will do it every time) or had somehow resisted the immersive intent of the whole set-up.

With regard to the latter, perhaps more could have been done by the curators to position the series within the historical ideal of synaesthesia. (Think mid-20th century “happenings”, say; or dust off Gene Youngblood’s Expanded Cinema, published in 1970, and unsurpassed in its theorising of what he called the “paleocybernetic” age.) It was obvious that so much of what was seen and heard in Intermission was also meant to have a visceral impact, even if only as a result of the use of extremely high-volume sound. Must everything aural end up as thrash noise to be heard these days?

While synaesthesia has been conceptualised in other ways, Sebastiane Hegarty’s essay “Aftersight: Let’s Hear What We Can See” published in festival guest Guy Sherwin’s Optical Sound Films 1971-2007 (available in a CD box set from OtherFilm in Brisbane) favours not a correspondence between senses (experiencing, say, a visual sensation, usually of a particular colour, in relation to a particular sound), but rather synaesthesia as a greater sharing of attention across the senses.

I’m challenged by this (as I am by “deep listening”), but also delighted and intrigued by a related, more poetic notion that Hegarty floats: that the aim of a live event is for its audio-visual impact to be experienced through the skin, that “sensuous film, simultaneously covering us in a body and a world” (quoted by Hegarty from Steven Connor’s Voice, Technology and the Human Ear, 1997).

I gather from Sue McCauley of Greyspace that MIFF director Richard Moore is keen for McCauley and Deverell to produce a program for next year’s festival that builds on Intermission. This is great news. With Melbourne’s vigorous audio-visual culture and rich history of experimental music at their fingertips, there’s plenty to keep these playful “syneastes” busy.