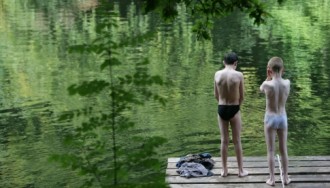 A warm and intimate festival experience

It was the world premiere of Summer, the second feature by Scottish director Kenny Glenaan, with Robert Carlyle in the lead. It tells the story of Shaun (Carlyle), who takes care of his long time friend Daz (Steve Evets), bound in a wheelchair and without much time left. Using flashback and forward, this film visualises the important events in the life of Shaun and Daz whose youth was wasted because of the unsupportive education system. Looking back at the summer they spent with Shaun’s first love Katy, this film slowly reveals the drama and struggles of each character.

The medium-sized auditorium, accommodating 280, was full on a chilly June Sunday night at this year’s Edinburgh International Film Festival (EIFF). The audience was relaxed. Some were bringing in drinks; some were talking with their friends. A man sitting next to my neighbour was called to join the guests. (He turned out to be actor Steve Evets who played Daz.) After a short introduction, all the attending guests: director, producer, scriptwriter and actors, went up to the stage. All looked very excited about this screening, which made the people in the audience themselves more excited and rewarded. I felt as if the film crew, and their family and friends, got together to celebrate this moment. This feeling of intimacy, which is very rare at any international film festival, got stronger as the film was screened and the Q&A was held. Even Robert Carlyle appeared relaxed and at home. I am not from Edinburgh or Scotland, but as I was sitting in the middle, looking around the audience, I felt excited to be a part of this big family.

Summer uses film’s magical language to let the audience travel through the story with the characters. It lets us feel the humidity in the woods and lake in the summer, and the wind that sweeps through the spacious field. It vividly provokes the memory of a time spent with a best friend and first love. After seeing this genuinely human film, it was very easy to feel part of the warm atmosphere in the auditorium.

I believe the audience had a great time this year, particularly good news for the festival organisers, who must have been anxious about their first EIFF in June.

Starting in 1947, EIFF had always been a part of the huge art and cultural celebration that is the Edinburgh Festivals in August. In spite of its 62 years of history and reputation as the longest continually running film festival in the world, there had been much discussion about changing the festival’s dates to further develop its own identity and to be able to have more space for itself and its potential audience. Chair of the EIFF John McCormick stressed “all the evidence pointed to a move to June being in the best interests of the Festival and of the city of Edinburgh. The change will help the Festival to grow and develop, and strengthen its position in the calendar of international film festivals.” (1)

Thanks to the date change, this year’s festival had many more events for both public and delegates. For the public these events offered a chance to get a fresh perspective of film. For filmmakers and industry professionals these created more opportunities to meet potential collaborators and to learn more about the film industry. However, there was certainly less variety in the films; this year’s selection represented 35 countries including co-produced films (2) while last year 42 countries and the year before 39 respectively. (3) Also there seemed to be very few industry professionals and guests from abroad, creating a much less international feel. By and large, having a film festival two months earlier than last year meant that the organisers had two months less than usual to look for and select films. I hope the future EIFF will be more international in terms of both films screened and people involved. 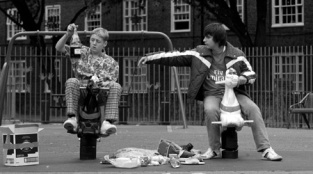 In this year’s selection, British films were among the strongest and most impressive. Directed by Shane Meadows, Somers Town highlights his strength and sensitivity in depicting adolescent boys. (4) Shot mostly in black and white, the film opens with Tomo (Thomas Turgoose, who played the rough yet sensitive and lovable teenage kid in This is England [2006]) arriving in London from his hometown of Nottingham. Tomo meets a Polish teenager Marek (Piotr Jagiello) who offers him food and accommodation and they hang out together around Somers Town in the north of central London.

The reference to François Truffaut’s Les Quatre cents coups (The 400 Blows, 1959) is apparent. Two young boys stroll in the streets and Tomo in Somers Town doesn’t have a place to stay, just like Antoine Doinel in The 400 Blows. The ending of This is England showed Shaun (Turgoose) going to the beach to throw away his English flag. Then he looks straight at the camera with the beach in the background, which inevitably reminds us of the famous ending of Truffaut’s film. The last part of Somers Town follows the duo taking the Eurostar to Paris. This part is shot in colour and doesn’t have dialogue, implying a family holiday video. It shows their excitement on their trip, and the meeting with their love Maria, who used to work at a local coffee shop in London. This sequence, full of colour and happy moments, contrasts with the ones in London, in black and white with a somewhat nostalgic feel. Meadow’s London in the present time remains in our mind as amiable, friendly and as fresh as the Truffaut’s Paris in the late 50s.

While Somers Town won the Michael Powell Award for Best New British Feature Film, my personal award of this year’s festival goes to Better Things, the eagerly awaited feature debut of writer/director Duane Hopkins. Hopkins studied art before learning filmmaking. His shorts Field (2001) and Love Me or Leave Me Alone (2003), both set in his hometown of the Cotswolds, won awards at several film festivals.

In Better Things, its themes start to appear as it unfolds via strings of stories of several characters in a rural English town. The characters struggle with similar experiences: love, life, loss and drug use; but they use different approaches to tackle them. A young girl is lonely but so afraid of the outside world that she will not leave her home. A schoolgirl wrestles with her ex-boyfriend’s angst after their first love has gone wrong. Another boy tries to relive the memory of his dead girlfriend using hard drugs, which they used to share. A grandfather, who leaves hospital, refuses to talk to his wife because of her past infidelity.

The opening shot of trees swaying in the wind, juxtaposed with a few excerpts from a novel, remained vividly in my mind long after the first viewing of this film. The style of cinematography is distinctive, marked by impressive colours, intriguing framing and a focus on actors’ expressions. The sound design and editing complemented it very well. As Better Things is the third project Hopkins worked on with cinematographer Lol Crawley, it proves their solid partnership but it is also a product of well-prepared shooting and careful editing. (5)

EIFF’s legacy as a festival for documentaries (6) was apparent with the rich and intriguing documentaries screened. This year’s lineup included highly anticipated titles like Errol Morris’ Standard Operating Procedure, about the US Army’s use of torture at the Abu Ghraib prison in Iraq, The Art Star and the Sudanese Twins (directed by Pietra Brettkelly), about acclaimed artist Vanessa Beecroft’s attempt to adopt twin babies from Sudan, and Werner Herzog’s Encounters at the End of the World, which depicts the director’s journey to and subsequent discoveries in Antarctica. 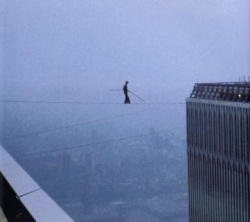 This year’s Audience Award winner Man on Wire (directed by James Marsh) is a dramatised documentary about the man who walked on wire between the Twin Towers of the World Trade Centre in 1974. With lengthy reconstruction sequences incorporated fairly naturally into it, this film shows Marsh’s effort to offer the audience a gripping story was worthwhile. (7) However, in some sequences, the dramatisation seemed excessive.

On the contrary, Gideon Koppel’s sleep furiously highlighted film’s capacity to tell a touching story with a quiet, slow and delicate language. Set in a small rural town in Wales, it depicts the town’s decreasing and aging population, the closure of a school as well as the diminishing traditional farming way of life. Koppel’s cinematography – with its well-crafted screen composition and angle – is in excellent harmony with the film’s music and sound, and creates a soft, warm tone to the whole film. Thus sleep furiously lets the audience lose themselves and be completely drawn into it. It’s a precious cinematic experience that the film festival should continue to offer, especially in the current climate with commercial cinemas limited in their offering of fast-paced films with dramatic mise en scène and special effects.