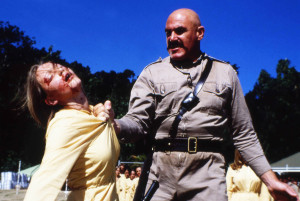 In the foyer of the East End Cinema, Melbourne, a group of teenage boys walked up to an enlarged copy of the Truth newspaper report of Phillip Adams’ walkout of Turkey Shoot (Brian Trenchard-Smith (1), 1983) at the Australian Film Awards pre-selection screenings in July 1982. One boy said, “That’s good enough for me”, and led the rest of the group into the cinema. Similarly, I felt that any film that upsets the delicate sensibilities of Mr Adams can’t be all bad. However, my doubts about the film began to grow in the first few minutes, particularly after the sight of Red (Gus Mercurio) greeting the new inmates – Paul Anders (Steve Railsback), Rita Daniels (Lynda Stoner) and Chris Walters (Olivia Hussey) – at a detention camp. Red, with a leer, limp and whip, appeared to be straight out of Hitler – Beast of Berlin (Sam Newfield, 1939) and he, and Ritter (Roger Ward), set the tone for the rest of the film.

Paul, Rita and Chris, who are victims of a totalitarian society, are subjected to continual harassment in the camp run by Charles Thatcher (Michael Craig). My disquiet with the proceedings accelerated as Ritter tortures a young girl by beating her repeatedly around the head. After beating another inmate, Dodge (John Ley) asks Ritter if he wants him to bury her and, when Ritter replies that the girl “ain’t dead yet”, Dodge says, “I could do it anyway.” This is quickly followed by Red’s attack on Chris in the showers, which she combats by zipping up his fly whilst he is fully aroused, and Jennifer (Carmen Duncan) assembling a gun blindfolded while telling another guest of the camp, “It’s less the size of one’s gun that counts than the skill with which it is used.”

At this point, I threw away my pen and notes, reached for the potato chips and tried to enter the spirit of the film with the rest of the audience. However, the violence in the first part is mild compared with the atrocities of the “turkey shoot”: hands are sliced off, toes are bitten off, skulls are split, bodies are dismembered and disembowelled, etc. After each episode of escalating, graphic violence, the boy who was impressed by the report of Adams’ walkout, told his mates, “I love it.”

Although the film never specifies the time or place, a publicity hand-out reports that the film is set in 1995 in an unidentified society (“Soviet totalitarianism with a capitalist veneer”, according to director Brian Trenchard-Smith) where the “deviates” – that is, those opposed to the ruling government – are brought to a “correction” camp. Guests at the camp, including Mallory (Noel Ferrier) and Jennifer, are invited to participate in a turkey shoot, whereby selected inmates are released into the surrounding jungle and are promised, falsely, that, if they evade capture until sundown, they will be set free.

This is a reworking of an often-used plot which appeared as long ago as 1932 in The Most Dangerous Game (Irving Pichel and Ernest B. Schoedsack). In this film, Bob Rainsford (Joel McCrea) and Eve Trowbridge (Fay Wray) provide the sport for a mad Russian count on his island. It subsequently was re-worked in 1945 as A Game of Death (Robert Wise), in 1956 as Run for the Sun (Roy Boulting) and then on television in Gilligan’s Island and Get Smart. An essential ingredient in most of the earlier versions, including the television series, was the time element, the supposed sanctuary of sundown. However, there is little or no tension in Jon George and Neill Hick’s script for Turkey Shoot. Instead of a steady build-up and accompanying suspense by means of basic techniques such as cross-cutting from the quarry to the hunter, the film cross-cuts during the hunt from one scene of graphic violence to another. The build-up becomes unimportant and is replaced by execution.

While the film’s surface of sex and violence marks its relatively contemporary context, Turkey Shoot has the basic structure of a 19th Century melodrama. For example, characters are stripped of any complexity and are represented by one, or at best two, attributes or traits. Thus, Paul is victim and saviour, Chris and Rita are victims, Thatcher is a sadist, Jennifer is a lesbian sadist and so on. They all occupy a purely fictional position in the narrative as they project the film’s simplistic notion of a strict polarization between good and evil.

The plot is equally predictable: regular emotional and physical climaxes punctuate the narrative, often for no other purpose than to retain audience attention in a crude fashion, and to deflect scrutiny of the simple characterizations and repetitive nature of the plot. The only real modification of the 19th Century formula is that the male victims share equal ‘torment time’ with the females, whereas in traditional melodrama the threat to the heroine is elaborated compared with that to the hero, who was usually subjected to sudden shocks. The narrative closure to Turkey Shoot is equally predictable and retains the virtue is rewarded and vice is punished convention.

How then does the film retain audience interest? Aside from spectacle, which is a traditional attribute of melodrama, Turkey Shoot relies almost completely on mutilation, torture and killing. The graphic nature of the violence escalates from an early scene in which blood is pouring out of a victim’s mouth to exploding bodies in the last part. The effect of this is to distance the audience so that, instead of the usual involvement with the plight of the hero or heroine, the interest of the audience is relegated to anticipation of the next atrocity. In other words, interest is focused, not so much on who survives the turkey shoot, but on the repulsion and fascination with the methods used to eliminate the villains and most of their victims.

Two other issues require brief consideration. First, the film has been described, by Lynda Stoner in a radio interview, as a “black comedy”. If one characterizes black comedy as the “acceptance of the unacceptable”, then this may be a plausible description, but it would ignore the powerful exploitation which the film proudly has in the foreground at every possible opportunity. Second, Turkey Shoot’s “M” rating raises the problem of inconsistency in the recent censorship ratings. As one who is opposed to all censorship, except as protection for those underage, I don’t wish to advocate a more repressive attitude. However, the full-frontal nudity, the language and especially the graphic violence in the film seem to question the validity of the “R” rating given to several recent films.

Turkey Shoot will screen at the Melbourne International Film Festival on Sunday 27 July at 3:00 PM.