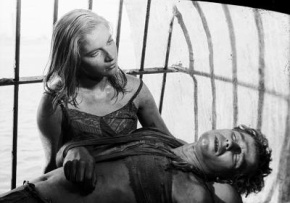 This annotation previously appeared in Senses of Cinema, no. 14, June 2001.

Andrzej Wajda’s war trilogy marks the beginning of one of the most remarkable careers in the history of Eastern European cinema. Wajda’s directorial path spans over from the first years of the post-revolutionary Poland to the early period of resistance to Stalinist rule to the 1980s emergence of Solidarity and beyond the fall of the Iron Curtain. Wajda joined the Polish resistance movement as a teenager, enrolled in the Krakow Fine Arts Academy immediately after the war, and subsequently attended the State Film School in Lodz. After graduating, he worked as an assistant to one of the most prominent Polish filmmakers, Aleksander Ford, before directing the first film in his war trilogy, A Generation (Pokolenie), in 1954.

Set in the 1942, Warsaw, A Generation is a bleak film of remarkable cruelty, examining the effect of occupation on a generation of Polish urban youth. Drawing on his wartime memories of life in the working class suburbs of Wola and Kolo, Wajda situates his characters in poor suburban streets, ruined playgrounds, squalid council houses and crammed workshops, giving his film a sense of grim authenticity. A Generation centres on a group of teenagers growing up in the war-torn Polish capital, and follows their gradual inclusion in the underground movement. The central character, Stach (Tadeusz Lomnicki), joins the resistance, attracted by the young communist agitator, Dorota (Urszula Modrzynska). Dorota changes his name into a ‘peasant’ nom de guerre, Bartek, more ‘appropriate’ for the class struggle. Along with his friends, Jasio (Tadeusz Janczar), Jacek (Ryszard Kotas) and Mundek (Roman Polanski), Bartek takes part in a series of actions against the Nazis. After Dorota’s arrest, he becomes the leader of a small resistance cell in the occupied city.

The film introduces a young generation of Polish actors, led by Wajda’s favourite, Tadeusz Janczar, whose performing talent and style broke away from the tradition of pre-war Polish cinema. Their performances successfully bind the carefree attitude of suburban teenagers with the universal drama of war and suffering. Poignant and revealing, Janczar’s performance became one of the highlights of the film, his dialogue resonating the tragedy of the urban youth, devastated by occupation.

Jerzy Lipman’s cinematography highlights the grim reality of everyday life in the city marred by pogroms, curfews, arrests and street executions. This powerful vision of terror and violence, affords a tone of bleak convincingness to Wajda’s cinematic debut. As the critic of London’s Daily Cinema pointed out in 1960:

Most films about the resistance seem trite compared with the savagery of this picture. It achieves an almost news like quality in its portrayal of an oppressed people fighting back. Some of the scenes – a youngster killing a Nazi with near lustful glee or grim chase in a factory – have a terrifying, compulsive authenticity. (1)

Wajda’s cinematic talent was instantly recognised by reviewers, yet the director was simultaneously criticised for his socialist-realism, the tendency of post-revolutionary art and especially literature and film in Eastern Europe, to romanticise the communist struggle. It is not surprising that Wajda’s selective portrayal of the Polish resistance found its most fervent critics in the West. Marek Hlasko, in Die Weltwoche, noted that, “[F]or the hero of the film, his fight is not a reflex act of resistance, but a battle in class warfare.” (2)

Wajda’s potent and vivid directorial style heralded the arrival of a new and exciting filmmaker. Based on the story by Jerzy Stawinski, his second film, Kanal (1956) is situated in the sewers of Warsaw, where, after a German attack, a group of resistance fighters withdraw during the uprising of 1944. Wajda creates a mosaic of meticulously combined narratives, following the paths of characters who once belonged to the same squad. The darkness of the canals is contrasted to the blinding brightness of the outside world bringing instant death to those daring to leave the underground canals and exposing the futility of their hopes. The central characters, Lieutenant Wise (Wienczyslaw Glinski), Jacek Bearing (Tadeusz Janczar) and his girlfriend Teresa (Teresa Izewska) are reduced to shadows looking for redemption and survival. Yet, this Dantean, apocalyptic odyssey through a hell without purpose, offers no relief or catharsis at the end of their horrible journey. As Marcel Martin noted,

[T]he gloom, impenetrable and smothering, yet allowing for a vague hope for survival, and the merciless brightness, an illusory symbol of freedom which, nonetheless, involves the immediate presence of death. Having said this – and words do not suffice to express the full intensity of the drama – one must ask: can the viewer really participate in a film in which the horror reaches such unimaginable heights? And the horror and pity, aroused by the misfortunes of the character, are they end [sic] in themselves, since no relief, no hope is offered in the conclusion? (3)

Janczar’s and Izewska’s performances were internationally lauded after Kanal won the Jury Prize, or as it was then called, the Silver Palm at the Cannes Film Festival. Their unsettling, memorable portrayals of young resistance fighters are rooted in human psychology, subverting the formulaic representations of fallen heroes in the post-revolutionary period. The dark, apocalyptic dimension of Jerzy Lipman’s photography and Jan Krenz’s musical score also enhanced the poetic sense of hopelessness, the unsettling, nightmarish vision of war which dominates Wajda’s cinematic narrative.

The Polish critics and audience remained highly sceptical about a film that offered a bleak story set in the Warsaw sewers instead of a heroic tale about the Ghetto uprising. These reservations toward Wajda’s work were furthered by Ashes and Diamonds (1958), the third film in his war trilogy. This film centred on the assassination of a Communist District Secretary and finally brought the director at odds with the Polish Government.