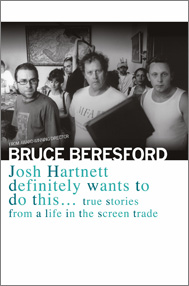 He didn’t know it at the time, but, in October 2003, Australian film director Bruce Beresford (The Adventures of Barry McKenzie [1972], “Breaker” Morant [1980], Driving Miss Daisy [1989]) was about to enter something of a lull in his career. He’d just abandoned post-production of the tele-movie, And Starring Pancho Villa As Himself (2003), starring Antonio Banderas as Pancho Villa, leaving it in what he describes (with more than a hint of irony) as “the capable hands of the HBO [Home Box Office] executives”. Then he’d headed home to Australia and turned his attention to the future.

At the same time, as he explains in the introduction to his diary-like musings about what took place over the next 20 months or so, he thought that “it might be of interest for people to read about the difficulties of setting up films rather than chronicles of them being made”.

What follows is a tale of frustration and bemusement, an account of aborted projects and thwarted aspirations and of how Beresford managed to negotiate his way out of two films that he was keen to make – Miss Potter (2006) (eventually directed very capably by fellow Australian Chris Noonan) and Amazing Grace (2006) (which ended up in the efficient hands of Michael Apted) – and into making one that he didn’t want to. That was The Contract (2006), with Morgan Freeman and John Cusack, which was released direct to DVD here and in the US.

During the time frame covered by the book, Beresford read many scripts, took many meetings, watched many films (old and new), went to many operas and recitals, dined with many people, passed judgment on many matters and got very pissed off about many things.

They include the idiots assessing scripts, the idiots running American studios, the idiots he has the misfortune to encounter beyond his circle of family and friends, and, most infuriating of all, the idiots in the media. In particular, he’s very cross that his unguarded (and totally wrong-headed) smearing of Toni Collette – a ham “who makes Bette Davis look positively restrained” – was made public (by that idiot Jennifer Byrne in The Bulletin). He doesn’t deny that he made the throwaway comment, but rather, insists that it was off the record.

Not that he has much respect for actors as a species anyway. “[They’re] notoriously bad judges of scripts, in general”, he writes, “and their decisions are made mostly by whim, pressure from their agents, or, most commonly, after offers of vast amounts of money.” His amusing description of his meeting with the actor included in the book’s title goes some of the way towards explaining his antipathy.

One is left wondering, though, whether his companions at lunch or dinner expected that their indelicacies and frankness about their peers were going to find their way into print. Their improprieties clearly feed Beresford’s appetite for the outrageous and one of the book’s inadvertent revelations is that there’s a bit of the Bazza about Bruce: fine wine rather than beer, but a liking for the crass and an eye for the sheilas.

Also thrown into the mix are occasional dramas – like the shock of his son’s illness – and some quirky encounters. I especially shared his liking for the bizarre sight he stumbled across in a Memphis hotel where he was staying: “Dozens of people gathered in the lobby mid-morning. I joined the group. They were all watching a daily ritual. A group of ducks who ride down in the elevator, waddle across the floor and swim in the fountain.”

As the first-person author of his saga, Beresford casts himself as a cultured reed in the wind, habitually tossing off his pronouncements with a facetious “But what would I know?”, confessing his lack of business acumen and implicitly blaming it for the hiatus in his career. Clearly it’s played a part, but there are times when one longs for him to take a stand against the stupidities raining all around rather than just complaining about them. Maybe he did, in fact, but he doesn’t tell us about it.

The main problem with the book, though, is the cursory approach Beresford takes to his diary-like format. There is lots of opinion on offer, but not much insight: bits and pieces, stray thoughts, but little serious reflection about his work or his life. We learn what he thinks, but he hardly ever deigns to explain why. Exacerbating this is the clumsy editing (for which he might not really be to blame): grammatical glitches, misspellings, and just how often do we need to be introduced to John Duigan (his filmmaker-novelist brother-in-law), Australian playwright David Williamson or New York critic John Simon?

Finally, the perfunctory probings that make up his “true stories from a life in the screen trade” suggest what can happen when filmmakers don’t have enough time on their hands. Or when they have too much.

Josh Hartnett Definitely Wants to Do This…: True Stories from a Life in the Screen Trade, by Bruce Beresford, Fourth Estate/HarperCollins Australia, Pymble, 2007.