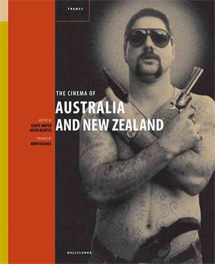 For a reader like myself, The Cinema of Australia and New Zealand served as an opportunity to revisit films and filmmakers not thought of for some time. As someone who has worked variously in Australian and New Zealand cinema over the past 20 years, the book was a refreshing reminder of some of the works and filmmakers that inspired me to become involved in cinema to begin with: experiences like seeing my first New Zealand film at the cinema at a special secondary school screening of Vigil (Vincent Ward, 1984); making a weekend road trip to New Plymouth in my first car (a not particularly sturdy Ford Escort) to see an exhibition of Len Lye’s films and kinetic sculptures; moving to Sydney and attending UTS and hearing Ross Gibson speak so articulately about Australian films like The Back of Beyond (John Heyer, 1954). This book served, in part, as a way by which to trace these kinds of memories and great moments of discovery. For old readers, The Cinema of Australia and New Zealand provides new ways of seeing things. For new readers, this book is full of discoveries. When caught up in the everyday business of getting a particular film made and making a living, it is all too easy to forget some of these great sources of inspiration.

The Cinema of Australia and New Zealand is the latest title in Wallflower Press’ 24 Frames series that focuses on national and regional cinemas from around the world. In keeping with the series’ philosophy, the editors have selected a broad range of films. This is not just a “best of” collection. The result is a volume of great breadth. The selected works range from the early Australian films, The Story of the Kelly Gang (Charles Tait, 1906) and The Woman Suffers (Raymond Longford, 1918), through to the more recent large-scale productions Moulin Rouge! (Baz Luhrmann, 2001) and The Lord of the Rings: The Fellowship of the Ring (Peter Jackson, 2001). Several of the chapters address the changing views of indigenous concerns, colonialism and postcolonialism in films such as Jedda (Charles Chauvel, 1955), Runaway (John O’Shea, 1964), Two Laws (The Borroloola Community with Alessandro Cavadini and Carolyn Strachan, 1981), The Piano (Jane Campion, 1993), Once Were Warriors (Lee Tamahori, 1994), After Mabo (John Hughes, 1997), One Night the Moon (Rachel Perkins, 2001), and Rabbit-Proof Fence (Phillip Noyce, 2002). While the Australian and New Zealand landscapes are so distinctly different in appearance, the themes of isolation and the unforgiving landscape recur throughout the discussion of films like The Back of Beyond, Vigil, The Piano and One Night the Moon, while The Goddess of 1967 (Clara Law, 2000) provides a counterpoint to the Australian film tradition of “characters asserting their dominance over an unforgiving landscape” (p. 197). The scope of the book is much greater than the 24 selected films; in the process of placing these films in context, many others are referred to. It is this approach and breadth that give The Cinema of Australia and New Zealand such a refreshing perspective.

The highlights of the book, for me, were the chapters on the work of experimental filmmakers Len Lye and Corinne Cantrill. Lye’s Free Radicals (1958) and Cantrill’s In This Life’s Body (1984) could be considered the hidden gems of New Zealand and Australian cinema. It is the focus that these chapters have on the filmmakers’ creative processes that gives them particular appeal. Both Lye and Cantrill had a very unique approach. Neither followed a set path, each creating their own method and mode of expression. Roger Horrocks’ chapter on Lye’s Free Radicals is one of the more satisfying of the volume. Horrocks is well known as the expert on Lye and he has written with great detail and depth of understanding. He also places Lye’s work in context with a clarity that some of the other chapters lack. However, given Free Radicals is just four minutes long, it is undoubtedly easier to do the work justice in a single chapter. It is difficult not to admire Lye’s disciplined approach: that he spent eight months making a four-minute film is quite extraordinary. In her chapter on In This Life’s Body, Anna Dzenis also focuses on Cantrill’s unique creative process. Dzenis summarises succinctly the many ways in which In This Life’s Body has been read within the traditions of independent cinema and feminist filmmaking. In This Life’s Body is part of a brave tradition that existed in Australia in the 1980s (the other notable film of this kind being A Song of Air [Merilee Bennett, 1987]). This tradition of autobiographical work and inquiry has continued with films like Penny Fowler-Smith’s At Sea (1997) and Ness Alexandra’s The Last Pecheniuck (2001). It cannot be underestimated the effect In This Life’s Body has had on female filmmakers and viewers. Dzenis’ chapter gives the film due justice.

Some of the films discussed in The Cinema of Australia and New Zealand were received and are still regarded with some ambivalence; for example, They’re a Weird Mob (Michael Powell, 1966) and The Year of Living Dangerously (Peter Weir, 1982). Reading Rolando Caputo and Adrian Danks’ chapter on They’re a Weird Mob, I was reminded how with every production there is an endeavour to bring all the right elements together; however, the unwieldy nature of film production – when so many decisions have to be made in the midst of production, often under great pressure – can mean this does not always happen. While not an entirely successful film, They’re a Weird Mob still made a considerable contribution to Australian culture. As Caputo and Danks point out,

it leads the way for a string of much later films including Moving Out ([Michael Pattinson,] 1982), Silver City ([Sophia Turkiewicz,] 1984), Head On ([Ana Kokkinos,] 1998), The Wog Boy ([Aleksi Vellis,] 2000) and Looking for Alibrandi ([Kate Woods,] 2000), that in their own distinct ways deal more explicitly with questions of ethnicity and cultural difference in relation to European migration or ‘migrant culture’ inflected themes. (p. 95)

Another source of inspiration for those working in the industry is the understanding the book gives of the struggle to make films in Australia and New Zealand, where the industry has, at times, been non-existent. There are many instances where filmmakers have overcome extraordinary obstacles to make exceptional films. Sometimes, our very own governments have created these obstacles. The book provides a political overview, giving an understanding of how various Australian and New Zealand governments have influenced filmmaking over time. In his chapter on The Phantom Stockman (Lee Robinson, 1953), Geoff Mayer details the impact Robert Menzies’ Liberal-Country Party government had on the film industry:

the Capital Issues Board of the Department of National Development issued a new regulation that public companies in Australia could not be formed for specific projects with a capital outlay of more than £10,000 – unless it was deemed of national importance. The production of Australian films was not considered to be of national importance (p. 44).

Undeterred by this regulation, producer and star Chips Rafferty set out to make a feature film for less than £10,000. To work within this restriction, Rafferty chose the western genre and shot The Phantom Stockman in 26 days. He worked creatively within the means of this very modest budget to make a commercially successful film. Roger Horrocks writes of a similar tradition in New Zealand:

Lye could be claimed as a prime example of what Ian Mune describes as the most impressive tradition of New Zealand filmmaking – the line of “invention” and “imagination” – made up of filmmakers (from Rudall Hayward to the young Peter Jackson) who have managed to get maximum use out of the minimum of resources. (p. 80)

The Cinema of Australia and New Zealand and its engagement with both industry and critical concerns will prove to be a very useful resource for those considering funding policies in the future.

When I studied Communications at UTS in Sydney in the early nineties, there was a great emphasis on the theory and practice of filmmaking informing each other. Sadly, I’ve found that this crossover does not always exist. The Cinema of Australia and New Zealand is a book that will encourage this approach and contribute to the dialogue between industry and academia. The book is not entirely cohesive; moving between the two countries, the very different films and writers make for, at times, disparate reading. Indeed, it would be possible to publish two separate anthologies on these cinemas. However, with such a range of works included, readers will surely find their own highlights. The Cinema of Australia and New Zealand is undoubtedly a great resource.