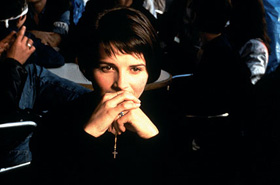 As with Dekalog/The Decalogue (1988), which was inspired by the Ten Commandments, Krzysztof Kieslowski used a simple, almost gimmicky conceit to create a final series of masterfully executed personal films. Ostensibly inspired by the colours in the French flag – signifying liberty, equality and fraternity – Trois Couleurs: Bleu, Blanc and Rouge (Red, White and Blue), released in 1993 and 1994, consolidated Kieslowski’s position as arguably the most important European filmmaker to emerge since the 60s and 70s when Federico Fellini, Michelangelo Antonioni, Ingmar Bergman, Jean-Luc Godard and others still attracted large English speaking audiences. The success of the trilogy is due in no small part to Kieslowski’s determination to explore the less obvious political connotations of these ideals. As he explained to the writer and translator Danusia Stok, the guiding principle behind the trilogy is “how the three words liberty, equality and fraternity function today? – on a very human, intimate and personal plane and not a philosophical let alone a political or social one” (1).

In the first film, the theme of “liberty” or “freedom” is framed within the study of a successful woman literally thrown into an entirely different state of consciousness by family tragedy. Julie (Juliette Binoche) survives a car crash that kills her husband, Patrice, a famous French composer, and five-year-old daughter, Anna. After recovering in hospital from minor injuries and an abortive suicide attempt, Julie’s response to this loss is to break off all connections with her past. Almost on autopilot, she puts the family home – a large country estate – up for sale and moves into a small apartment in Paris. She then determinedly immerses herself in a world of solitude and anonymity punctuated by a listless routine of eating, sleeping and occasional exercise. Viewers coming to Blue for the first time may wonder how its main protagonist has any time for abstract notions of freedom as she struggles with almost incomprehensible grief.

A series of forces gradually pull Julie out of her despair and enable her to reconnect with the world. There is pressure on her from a fellow composer and family friend, Olivier (Benoît Régent), to complete her husband’s last composition, a commission for the European Union. She becomes friends with Lucille (Charlotte Very), a stripper who lives in the apartment below her. A witness to the crash contacts her. And she also discovers that her husband was having an affair during the last four years of their marriage.

In Blue, Julie learns to redefine freedom as any action that liberates her from memories of her dead husband and daughter. The subjectivity of her emotional reasoning is conveyed by a deft use of blue filters in several scenes where Julie is alone. Intriguingly the external world of business and family is often seen through a dull yellow filter. As Julie begins to reengage with the world, the way in which Kieslowski and his cinematographer, Slawomir Idziak, employ this colour scheme changes. Blue ceases to become the colour of Julie’s depressed state, but a sign of hope, a reawakened desire to create and, most importantly, a signal to live life fully rather than simply exist. Individual freedom is nothing, Kieslowski argues, without hope, a sense of purpose beyond mere survival or simple empathy toward others.

Neither a brief description of Blue’s plot or its visual strategy can do justice to the film’s density. Zbigniew Preisner’s score is not only central to establishing the verisimilitude of Julie’s high art background and her late husband’s stature, but reinforces the idea that freedom is a work in progress not an end in itself. Binoche’s performance is remarkable for its lack of sentimentality and economy at expressing the near catatonia many feel after the unexpected death of a family member. There are many other things one can say about Blue’s exploration of grief, but it is important to stress that Kieslowski explores it with his own particular brand of humour and irony. Although the tone of the film is sombre, little vignettes such as Julie’s handling of a mouse infestation or the development of incidental characters like a street musician are handled with unforced wit. That same wit will reach full bloom in the black comedy that dominates much of White and adds the appropriate degree of pathos to the series of coincidences that link the characters in Red.

Blue and the rest of the trilogy were that rare beast – films popular with international audiences and many of the world’s most festival weary critics. However, not everyone felt entirely comfortable with the breakthrough. Some critics in Poland feel Kieslowski’s pan-European films such as The Double Life of Veronique (1991) and the “Three Colours Trilogy” lack the political rigour of films like Camera Buff (1979) and No End (1984). While some such as Geoffrey Macnab writing in Sight and Sound at the time of the film’s release felt that Blue’s self-conscious camerawork at times resembled “an upmarket brandy commercial” (2). Given the increasing lack of ambition of many European co-productions (a recent well intentioned disaster like Atomised [Oskar Roehler, 2006] comes all too quickly to this writer’s mind), one can certainly appreciate why the trilogy makes some critics suspicious.

In his excellent BFI monograph on the trilogy, Geoff Andrew acknowledges the three colours conceit may have made a new Kieslowski project more palatable to an international producer like Marin Karmitz, but also made it possible “that viewers might more readily understand and accept [Kieslowski’s] delicately detailed exploration of human psychology if they were given repeated opportunities to become acquainted with his miniaturist methods” (3). If working in the international arena imposed limits, it certainly wasn’t on Kieslowski’s imagination. Like a very different master, Orson Welles, Kieslowski seemed to achieve new heights despite the problematic history and limitations of the “Euro pudding” film model.

Unlike many international co-productions, Kieslowski worked on Blue with a modest budget, a tight shooting schedule and with collaborators (most significantly his co-writer, Krzysztof Piescewicz) he had worked with previously on his Polish films. Kieslowski doesn’t use Paris as a chic backdrop. The documentarian in Kieslowski can be found in all parts of the trilogy. As benumbed by sorrow as Julie is, the viewer is constantly aware of the city that swirls around her. The economic disparity, to take one example, between Julie’s bourgeois comfort and Lucille’s sex show at a Pigalle strip club is a subtle reminder that grieving is a luxury some have never had the time or money to experience.

As with White and Red, the great achievement of Blue is its ability to take a broad and unwieldy theme – what is freedom? – and then explore it through a unique individual’s predicament. Watching the films one can almost imagine Kieslowski joking, “there are a thousand stories in the naked city, but these three, trust me comrade, are the most important”.