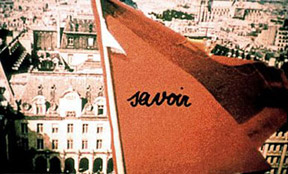 … I drive off without a care on the road to dreams. I forget about Hiroshima, Auschwitz, Budapest. I forget about Vietnam, the housing problem, the famine in India. I forget about everything except that I’m back at zero and have to start out from there.

Le Gai savoir (1969), Jean-Luc Godard’s attempt at returning to zero, represents a milestone in his career, a distinct break with his New Wave films that does, however, retain continuity with the films he began making in 1966. One year earlier, he had already stretched the bounds of the ‘bourgeois’ narrative to their limit with Pierrot le fou (1965). The three feature films Godard made in 1966 – Masculin Féminin: 15 faits précis, Made in U.S.A. and 2 ou 3 choses que je sais d’elle – displayed an evolution toward radical political activism, especially the latter film, which was a brilliant application of Marxism to analyse Gaullist France. In 1967, through his film Week End, he contemptuously declared the fin de cinéma, thereby abandoning the narrative form. Le Gai savoir represents Godard’s metamorphosis into a militant filmmaker – or, as the premier Godard scholar Colin MacCabe put it, Godard

Le Gai savoir is a feature-length cinematic essay consisting of a series of dialogues between Patricia (Juliet Berto), identified as the Third World delegate to the Citroën plant in the North Atlantic, the daughter of Lumumba (2) and the Cultural Revolution, and Émile Rousseau (Jean-Pierre Léaud), later identified as the ancestor of the Enlightenment philosophe Jean-Jacques Rousseau. Early on, Patricia declares, “I want to learn, to teach everyone and myself, to turn against the enemy the weapon which he uses to attack us: language”, providing Godard’s own point of departure, the Bazinian ontology he extolled as a Cahiers du Cinéma critic: “cinema is also a language.” (3) Television is clearly the ideal medium for disseminating the instruction needed to disarm the “enemy”, since, according to Patricia, it guarantees access to “every bedroom”. Alone in an abandoned television studio, they liken their predicament to that of Robinson Crusoe shipwrecked on an isolated island. They ruminate on the political primitivism of France in 1968, the reformism of the Communist Party, unable and unwilling to assume power, as well as their disdain for the fare emanating from the film industries of Hollywood and Moscow, the British Broadcasting Corporation and, among others, O.R.T.F. (which had initially financed the film). Their goal is defined not simply as starting from zero, but to return to zero, hence to proceed without any ideological encumbrance. They conclude that an investigation of sounds and images is warranted and organise a three-year plan as such, an undertaking that will realize both their practical and theoretical aspirations, and thereby truly exemplify the joy of learning.

During the first year, their tasks are to collect images, record sounds and conduct experiments, including an extended word-association interrogation of a young boy and an elderly artisan saddle-maker. Among the more notable associations made by the boy is his pairing of the word ‘revolution’ with the month ‘October’. The sentiment and the conclusion of Year I are conveyed non-diegetically through a steady stream of photos and cartoon images on which is inscribed the text: “Henceforth we refuse to accept any kind of self-evident truths. We do not believe that there exist any self-evident truths. Self-evident truths belong to bourgeois philosophy”, a postulate that would be reiterated by one of the narrators in Godard’s Dziga-Vertov film, British Sounds (1970). Throughout the course of the film, Godard seeks to estrange the audience of Le Gai savoir from any semblance of a narrative by a multiplicity of extradiegetic devices of both a visual and an aural nature: photographs of historical personages, images and advertisements of popular culture, passages from Wolfgang Amadeus Mozart, a Cuban revolutionary anthem, as well as Godard’s own voice-over commentary accompanied by unnerving radio static. 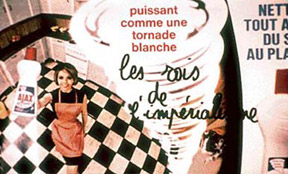 The task at hand in Year II is to criticise, decompose, reduce, substitute and recompose images and sounds in the manner of the literary critic Jacques Derrida, whom Godard references early in the film through an image of the cover of De la grammatologie. This deconstruction of images and sounds is interspersed between the didactic dialogues of Patricia and Émile. In a voice-over, Godard equates the French and American presidents Charles De Gaulle and Lyndon Johnson with the notorious totalitarians Adolf Hitler and J. V. Stalin in reference to their reliance on science. While engaged in the analysis of sound, Émile cautions Patricia on the pitfalls of the “ideology of real life” indulged by filmmakers such as Michelangelo Antonioni, Ingmar Bergman, Robert Bresson and Carl Theodor Dreyer. At the end of Year II, Patricia initiates a dialogue devoted to civic education, the main concern of Rousseau’s treatise, Émile, ou l’education, on which the film is very loosely based. She punctuates the dialogue with a quotation from one of Lenin’s pamphlets written on the eve of October just before the seizure of power (4) and a theoretically vacuous quote from Mao Zedong’s little red book. Their dialogue gives way to a barrage of images with the inscribed text: “The lords of imperialism have transformed technological progress and sexuality into instruments of repression.” 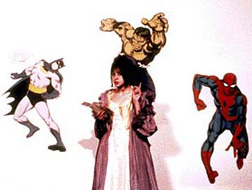 Year III provides some models of images and sounds, including the delightfully absurd sequence entitled “historical film” which presents Patricia, in the garb of a Gothic courtesan, reading a text unintelligibly against a background decorated with 20th century comic book superheroes. Later on, Émile supplies an anecdote about an autodidact employed in a bookstore who learned to read by glancing at the covers of books purchased by customers as he wrapped them; after thirty years, the fellow was able to tackle the works of the novelist William Faulkner and the linguist (and political activist) Noam Chomsky. Extended excerpts from speeches made at the student rallies of May 1968 are interrupted by Godard’s sporadic voice-overs. The final image of Year III references the dramatist Bertolt Brecht, the single most seminal influence in Godard’s intellectual itinerary from as early as Vivre sa vie: film en douze tableaux (1962). (5)

In the last scene of the film, Émile announces that he’s departing for Bratislava to shoot a film with Jerzy Skolimowski, the director with whom Jean-Pierre Léaud made Le Départ in 1967. Patricia complains that the film is incomplete; half the shots are missing. Émile reassuringly assigns these shots to kindred filmmakers such as Bernardo Bertolucci, Jean-Marie Straub and Glauber Rocha. After briefly contemplating if the film itself is a failure, the actors bid each other farewell, actually using their real names (for Brechtian effect): Émile says “Godspeed, Juliet”, Patricia retorts “God is Dead! Jean-Pierre”, a direct reference to Friedrich Nietzsche’s collection of aphorisms, Die Fröhliche Wissenschaft, the French translation of which is Le Gai savoir. Godard concludes his commentary with the didactic and non-dogmatic disclaimer: “This is not the film which should be made, but shows how, if one is making a film, that film must follow some of the paths shown here.” Having returned to zero, Godard embarked on the most audacious enterprise of his career and of the history of filmmaking: the Groupe Dziga-Vertov.