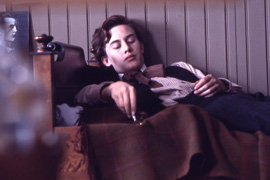 “Life shakes the hand of death at the moment of conception”, observed Edvard Munch, Norway’s greatest artist, in one of his literary ruminations used in Peter Watkins’ innovative adventure in cinematic biography. Epic in formal ambition and stinging with documentary immediacy, this experiment feels as if the film is being constructed as we watch, thanks to the director’s original stylistic idiom that collapses and recycles time. Those seeking a “balanced” judgment of the painter’s achievements will find themselves instead tipped into a total immersion in his tortured psyche and feverish erotic longing, with equal attention to the veins of social and historical reality that touched him.

From its paired opening images – the young artist’s liaison with a maidservant and his mother’s attack of consumption – sex and death inform the film, as eros and thanatos accompany Munch from 1884 to 1895, a decade when he separated himself from the constricting puritanical authority of his father’s claustrophobic household, undertook a defining infatuation with a married woman, and introduced a bold vision of subjectivity into twentieth century art. While he struggled for acceptance from a hostile European art establishment, traumatic images from his childhood obsessed him to the point that he would write, “Illness, insanity and death were the black angels that watched over my cradle and accompanied me all my life”.

The former BBC director, hitherto known for confrontational re-imaginings of the past (Culloden, 1964) and the future (The War Game, 1965) staged with journalistic authenticity, here made an unexpected foray into biography, art commentary and even evocation of raw erotic force. Rooted in the same subjectivity that led Munch to develop his expressionist style, Watkins bases his portrait of this apostle of subjectivity on primary research, recreating the intellectual ferment enlivening the smoke-filled coffee houses of Kristiana and Berlin, where Munch joins the bands of bohemians and radical artists noisily bristling at bourgeois society’s constraints. They drink and conduct liaisons with ardour as they heatedly debate Darwin and Nietschze, anarchism and the occult, and especially women’s rights and free love. Watkins stresses that feminist consciousness had reached a point where women dared to sidestep dual societal traps: the cage of marriage or the slavery of whoredom.

To understand Munch as a man subject to his era’s ideas and pressures, Watkins addresses the impact of money and power on economic relations by inserting unassuming reminders of everyday reality for the majority, such as testimony about the wretched conditions of child workers in Oslo, where boys and girls endured the same hours as prisoners at hard labour. He drops in on the local police as they conduct their inspections of legalised prostitutes to control venereal disease, and pauses to note significant events such as the invention of the machine-gun, civil war in Chile, the birth of D.H. Lawrence and Hitler, the publication of Das Capital, and Japan’s declaration of war on China.

Pushing past even Van Gogh and Gauguin in his expressionism, Munch painted with intense subjectivity, peeling the exterior down to a presumably more genuine inner reality. By matching himself against Munch, Watkins undertakes the same risk, consciously exposing his own fallibilities. Certainly the director and the artist share a similar peripatetic career, both suffering unending attacks on their work, but Watkins has also confessed “a very strong connection with Munch’s experience, on the most personal level – sexual fear and inhibition, need, yearning, a remembrance of brief moments lost for ever, and half a life of aching… I knew that I would make a film about this man, because, in that way, I knew that I would also be making a film about myself.” (1) What is expressionism, after all, but private demons unmasked in public light?

Equally, just as Munch suppressed optical artifice in his paintings, so Watkins rejects the artifice of skilled performers, using non-professional actors throughout who improvise their dialogue (Strindberg is played by an actual descendant of the playwright). This fresh approach of communitarian participation and respect for social contexts – further marked by a daunting complexity of overlapping sound layers and manipulation of time – make Edvard Munch irreducible to a conventional biopic. None of man’s social institutions – not the family, not marriage, not government officialdom, and certainly not the art world – receives a free pass or gets prettified as an ideal.

Despite his evident sympathy, Watkins uncompromisingly refuses to let his protagonist off the emotional hook: Munch’s art excuses nothing. Neither a martyr to genius nor a conventional hero for audience identification, he is a man like any other: by turns petulant, self-absorbed, possessive and morose. Less a dramatic figure of passions and miseries (as Vincente Minnelli’s portrait of Van Gogh in Lust For Life [1956]) than an exemplar of earthy humanity in all its knotty base appetites, his characterisation suggests Maurice Pialat’s Van Gogh (1991): “His many weaknesses add up to strength”. Despite the artist’s frayed nerves and sharp edges, his art persists as a simple physical necessity, akin to any bodily function, becoming at once his stability and his release.

This project began in 1971 when Watkins attended a film screening scheduled by happenstance at Oslo’s Munch Museum (2). From this chance encounter with the artist’s work grew a three-hour-plus film commissioned by Norwegian television, with voiceovers in English spoken by Watkins himself, but dialogue completely in the Norwegian language. Again mirroring Munch’s subjectivity, Watkins conceived this film as “a major challenge to what he calls ‘the art historians’ limited way of writing about an artist’, only in terms of artistic influences rather than as an attempt to relate his personal life to his art” (3).

In production for a year, shooting in many actual locations of Munch’s life, the 215 minute version was shown in 1974 over two nights in Norway and Sweden, to considerable popular approval and Watkins proceeded to re-shape and re-edit the footage into the 167 minute theatrical version. At its release, delayed by the Norwegian producers until 1976, the film won praise at its New York premiere from Vincent Canby as “moving, complex, beautifully felt… one of the few [films] ever to dramatize successfully the sensitivity, the profound emotional chaos and the discipline that occasionally combine to produce the special molecular structure of a major artist” (4), all the more impressive as this critic had sharply condemned Watkins’ Punishment Park in 1971.

Despite other noteworthy support (5), the film suffered from the injustices of the mass market, the same enemy that the director has consistently fought in his quest to activate public challenges to received ideas and injustices. Watkins’ films, exactly like Munch’s cathartic paintings, are not conceived as commodities, his images not designed for sale and re-sale, so distributors and exhibitors have rejected them as unmarketable. Nevertheless, Edvard Munch has just barely managed to survive this embargo, not only rescued from obscurity but its already deteriorating negative rescued at the eleventh hour and only recently restored (6).

No art is created in a vacuum, neither Munch’s nor Watkins’, and this film reflects its historical moment of the mid-1970s, a time when international uprisings against power had been betrayed or thwarted, and idealism became distracted by the newly receding boundaries on sexual frankness. Physical intimacy, in this portrait of Munch, seems a priapic compulsion for the man that turns into a torment of jealousy and stalking behavior. The young artist experiences a crisis of ownership, a corrosive desire to possess the loved one despite its physical impossibility. Tellingly, his painting “The Kiss” depicts two lovers who disappear into each other as they embrace, forming one face erased of individuality. As Munch’s adulterous mistress provokes him, whispering “I could do the most awful things in the dark”, Watkins suggests a comparable abstraction with a very close shot of a sensual kiss, zooming in still closer on lips touching the nape of the neck.

Munch’s agony of frustration expresses itself brutishly in canvas torture: the camera lens stays close to the canvas’s surface to observe as he transfers his emotions to his instruments, scratching his palette knife into the dried oil, punishing the surface with gouges and crosshatches, blurring lines and erasing realistic details. As the artist reaches bottom – rejected, exiled, alcoholic, and afflicted with consumption – he paints his best-known self-portrait in “The Scream” or “The Cry” (here called “The Shriek”, congruent with the Norwegian title “Skrik”), letting his malaise emanate outward in reverberating shockwaves from his central figure.

Like Munch’s compositions, Watkins’ visuals tend to be frontal, with little perspective and no vanishing points or other trompe l’oeil effects. Odd Geir Saether, the Norwegian cinematographer who also shot Watkins’ La Commune (2000) a quarter century later, uses telephoto lens compression to push the characters against each other within the tight frame, for a claustrophobic effect that excludes the open sky. In the bosom of Munch’s Bible-bound household, human eye contact is avoided among the family members, yet the actors each look at the camera from time to time, like an objective guest. Other characters too, rather than averting their gaze from Watkins’ camera, glance at it, inclusively acknowledging our participation in their scene as trusted onlookers.

This dance of eye contact again echoes Munch’s paintings, where eye sockets are either lost in shadows or erased in abstraction, or when Munch’s self-portraits stare back directly at the viewer, his glassy eyes shining brightly with madness. As the film’s narrative threads weave together, Watkins experiments with making eyelines meet across time and space, as the adult Edvard’s gaze is subtly match-cut to his childhood self in the next shot.

Watkins seals this pictorial immediacy with a spectacular editing concept, creating a continuum of time that constantly interleaves past and present, sickness and sex, creation and frustration. Mental and physical states interpenetrate in piercing images and memories the artist cannot forget, all densely edited with rhythmic urgency. Thus, in the duration of only twenty seconds, we see Edvard the child coughing on his father’s shoulder, then the adult Edvard, then his lover, then his seductive maidservant: four distinct situations and times yet each inflected with a slight movement or nuance that individualises them.

Meanwhile, dialogue overlaps scenes, underscored with natural sounds such as unnerving weeping, while music comes from strictly visible sources, whether vaudeville ditties or band marches or church organ flourishes. During the film’s last hour, to support an onrush of voiceover commentary about Munch’s artistic breakthroughs, Watkins discreetly introduces a poignant salon melody that finally admits a heightened romantic response (though the music is just as likely to abruptly stop).

By the film’s finale, Watkins’s extreme montage achieves a kind of simultaneity as a dozen different events and time periods cycle past in less than a minute: cancan dancers kick, a child hemorrhages, Munch’s knife gouges wood, his lover kisses his neck. Yet what could be punishing or confusing unfolds with visual clarity, with not one shot repeated in over three hours. Here, in the words of Watkins scholar Joseph A. Gomez, “the viewer experiences a level of complexity perhaps unmatched in the history of cinema” (7).

Before the screen fades to black, Watkins furnishes three successive endings, interrupting the final credits and even extending beyond them, to relate the varied fates of the women in Munch’s life, until the intensely sensual final image: their backs to the camera, the artist and his lover stand like Adam and Eve at the fjord’s edge in a blazing sunset that turns the flowing surface of the water into ribbons of blood, as Watkins’ art celebrates and reconfigures Munch’s.