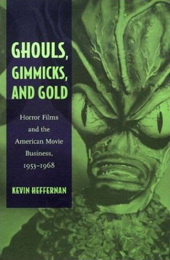 If one of the benchmarks for the success of a historical analysis is its conceptual transferability onto contemporary situations, then Kevin Heffernan’s Ghouls, Gimmicks and Gold is very successful indeed. In a time where debates rage about how the industry should combat its ever-diminishing box office thanks to unauthorised downloads and the proliferation and normalisation of home theatre systems, contemporary film producers, distributors and exhibitors face very similar challenges to those discussed in Ghouls – namely, how to woo the audience off their couches and back into cinemas. What Heffernan offers is a complement to a rich theoretical base in genre theory with specific, but transferable, reference to the horror film. While acknowledging the importance of the insights into the genre provided by such theorists as Robin Wood, Carol Clover, and Thomas Doherty, Heffernan identifies a neglected area in their analyses of the genre’s evolution: how the economic imperatives of an industry shape its final product. As a result, Ghouls becomes a multi-disciplinary text, one that cultural theorists, business historians and horror enthusiasts alike will find both useful and entertaining.

The “ghouls, gimmicks and gold” that Heffernan refers to are the three areas of production, distribution and exhibition in the film industry. He chooses the period between 1953 and 1968 because of the dramatic changes the industry was facing in those 15 years: namely, the knock-on effect on independent cinemas of the 1948 Paramount decision to disallow the vertical integration of studios and cinema ownership; the recognition of the teenager as a new market force; and the increase in television ownership. This is a period so rich in economic shifts that it provides a concentrated allegory for the influence of economic forces on other periods of the industry’s history. Indeed, the clear time frame of Heffernan’s study means that the doors are now open for other film historians to chart other periods of cinema’s history from an economic perspective, such as the introduction of the video cassette in the 1980s and the resulting era of the “video nasty”, or the problem of piracy in today’s digitally dominated media landscape.

Where Heffernan falls down is in his referral to Thomas Schatz’s highly contentious stages of generic evolution as statements of fact, which he then uses to form the structure of a historical work. Schatz’s Hollywood Genres (1), a landmark text in genre theory, was first published in 1981 and introduced his “stages of generic evolution”: experimental (the development of a new genre), classical (where some sort of “equilibrium” is reached), refinement (an increase in complexity of the classical) and lastly, baroque (self-consciousness and parody). These stages have been contested by subsequent genre theorists on two grounds: as being dangerous when defining a particular creative period as “classical” (a categorization which relies on value judgements and nostalgia); and for failing to acknowledge the propensity of early members of the corpus for parody, generic hybridity and the recognition of audience familiarity. Ghouls’ introduction claims to chart the evolution of the horror film through Schatz’s refinement and baroque stages, thus leaving the extensive body of horror films from 1968 to the present in a kind of limbo beyond classification. Heffernan’s text is valuable without using a Schatzian framework, as its chronological arrangement of the chapters provides a more specific chart of the genre’s evolution from 1953 to 1968. What Ghouls does for genre theory is prove that there is no one way to chart generic evolution, as early structuralist theorists such as Will Wright would have us believe. Heffernan recognises genre as a product of humans – of both cultural and economic forces that, like any artistic field, cannot be analysed through ahistorical means.

The contemporary relevance of Heffernan’s study is evident in the first chapter, entitled “Horror in Three Dimensions: House of Wax and Creature from the Black Lagoon”. This year, there have already been reports of major directors such as James Cameron, Peter Jackson and George Lucas redistributing their flagship films (Titanic [1997], King Kong [2005] and Star Wars [1977] respectively) in 3-D format in an effort to bring audiences back to cinemas. James Cameron, in an address to the National Broadcasters’ Digital Summit held in Las Vegas in April this year, touted the introduction of digital cinema and its potential for 3-D exhibition as a key weapon in the war against declining box office: “We’re in a fight for survival here…Digital 3-D is a revolutionary form of showmanship that is within our grasp. It can get people off their butts and away from their portable devices and get people back in the theaters where they belong” (2). Heffernan cites House of Wax (André De Toth, 1953) as the first major studio 3-D release, and the film was a box office success. He then charts the years of hardship faced by smaller cinemas due to the cost of adapting the new technologies and the intense competition between manufacturers in their race to become the industry standard of exhibition. The dramatic increase in television ownership during this period meant that audiences were choosing their living rooms over theatres. The challenges faced by exhibitors in the 1950s are mirrored in the new millennium, as the boom era of the big screen television and surround sound systems replicates the luxury and drama of the cinematic experience at home, forcing cinema owners to look for other means to regain their competitive edge.

With chapters as enticingly titled as “The Colour of Blood: Hammer Films and The Curse of Frankenstein” and “Demon Children and the Birth of Adult Horror”, Heffernan extends an invitation into the world of Bela Lugosi, Vincent Price, and a dazzling, slimy array of monsters and magic, and then investigates the economic imperatives that underlie their production and consumption. He provides a detailed history of an industry plagued by conservative politics but floated by social upheaval and teenage rebellion. Heffernan consults a vast array of sources, from industry press such as Variety and Motion Picture Herald to transcripts of government proceedings. The book includes stills and poster images from both the obscure and the iconic films of the genre and ends with an appendix of “Feature Film Packages in Television Syndication 1955-1968”. Ghouls, Gimmicks and Gold is both a reference guide and a complement to any horror fan’s library, and Heffernan’s book is academically valuable not only to scholars of cinema but anyone with an interest in the cultural significance of shifts in market forces and capitalist agendas.