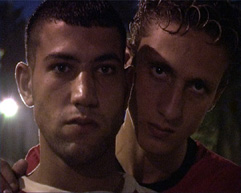 The change of venue for this year’s queerDOC festival, the international documentary film festival presented by Queer Screen, harked back to a history of cinematic diversity. The Valhalla Cinema, in the inner western suburb of Glebe, Sydney has a rich cinematic history that included exploring independent film and is famous for the early films of the likes of John Waters and Rolf de Heer. To sit through the four afternoons and evenings of the festival in the Valhalla, in seats that vibrate as people pass by in the aisle, was a cinematic experience heightened by sensation and reminiscent of cinema-going in the 1980s.

On the opening night we were introduced to the people behind the scenes of Queer Screen on film, who outlined queerDOC’s aims. Now in its seventh year the queerDOC festival stands alone in being the only film festival in the country that shows solely gay documentaries.

The quirky intro short of a Sister in habit running through the streets of Sydney to deliver reels of film to the cinema set the atmosphere for the festival’s change of venue and was repeated at each session. The opening night party, spilling up the stairs and onto the balcony overlooking Glebe Point Road, expressed a jubilant celebration of queer cinema. Sitting through every film was a difficult task given the duration of the festival, but in catering for a diverse audience the festival successfully provided diverse cinema with the continuing tradition of separating “boys” and “girls” films.

The All-Australian Opening Night, featuring three productions from this year, was a fresh start to the festival, reflecting Queer Screen’s commitment to the local queer community, and a sell-out session of the festival. Dean Francis’ Transgression (2004), filmed in part in the recognisable grounds of Sydney University, explored issues of gender identity, effectively using re-enactment to relate the story of a 19 year-old Asian student who underwent sex reassignment surgery to live out his female identification. Judith Cobb’s Tomboy (2004) gained strong audience recognition by exploring the ways in which blurred gender boundaries and identification in childhood continued to shape adult life. The obvious enjoyment of the four very different subjects chosen for this documentary, including one straight woman, lifted the film from an otherwise undeveloped position. 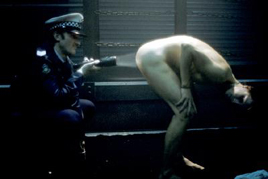 The feature film of the opening night was The Tasty Bust Reunion (2004), directed by Stephen Maclean and produced by Ebsen Storm. Sally Gordon, who was the main protagonist for the court case featured, introduced the film. With the influence of the musical genre evident, this documentary takes a sobering yet humorous look at the events surrounding the 1994 police raid on Tasty, the Melbourne gay nightclub. Re-enacted by the patrons from that night, the film allows its subjects to tell their stories of being forced to stand lined up for hours with their hands on their heads before being strip-searched at gunpoint. That this group of ordinary citizens took on the Victorian Police Force and fought for their right to party, and won, attests to the strength of the queer community, and places the raid as Australia’s Stonewall. The editing style and the choice of camera angles successfully reinforce the power dynamics during the raid. Maclean has managed to document a story of trauma and issues of civil liberties in a way that is entertaining. Sarah Pax’s sultry delivery of the song “No Place For Me” summed up the feelings of defiance at the loss of basic human rights and was a highlight of the film.

One of the most compelling feature films of the festival, and another sell-out, was Garden (2003), an Israeli film from directors Adi Barash and Ruthie Shatz. Told simply, this is the story of 17 year-old Nino, an illegal Palestinian, and his 18 year-old friend Dudo, an Arab Israeli, who live in a block of streets in Tel Aviv known as the Garden, where the boys and transsexuals live and make a living from prostitution and selling drugs. The intimacy that the directors’ capture between the two boys is also evident in their relationship with them, and the film succeeds in allowing what feels like privileged glimpses into their private dark world. Exploring the issues of coming to terms with their own sexuality whilst struggling with bigger issues of survival against a background of politics, Arab culture, interracial friendships and resident status gives valuable insights into queer life in cultures more politically suppressing than our own.

Tribe 8 (2003), directed by Tracy Flannigan, was perhaps the most deliberately confrontational film of the festival. It documents the first ever dyke punk rock band using live performances and candid interviews capturing the members’ personal lives on the road, at home and at work. The grainy performance footage, like the grit of a punk band and the archival childhood pictures worked well with the intense probing of the interviewers to reveal the humour behind the sadomasochistic acts, blow jobs and mock castrations. 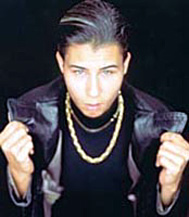 Drag Kings on Tour (Sonia Slutsky, 2003) was another popular film, reflecting the current interest in female gender fluidity. Again the honesty of the discussion of daily life on the tour and personal relationships with families revealed the multilayered realities of performing drag and transexuality. The resistance experienced by the drag kings from some feminists at the National Women’s Music Festival put an interesting slant on the history of radicalism.

Introduced as “instructional videos”, the films of Too Hot for TV created much comment from the audience. The film Bigger (2004), dealing with penis enlargement, explored feelings of obsession and fantasy, exposing the desire to display parts of the body at market places for comment.

American Eunuchs (2003), directed by Gian Claudio Guiducci, dealt with the illegal practice of male castration in a very graphic way. It shared some of the motives behind the desire to become a human “gelding” without delving too deeply into the individual men who sought out Dr Spectre. Comments from audience members in the foyer afterwards ranged from shock to abhorrence. In contrast, Asswax (2004), a very cheeky film exploring the fine line between pleasure and pain from full body waxing, drew much more positive and enjoyed reactions.

Revisiting opening night, the festival ended with two documentaries dealing with human rights issues. One Wedding and a Revolution (2004), directed by Debra Chasnoff, documented the historic moment and turning point in American politics of the first same-sex wedding in San Francisco. The frantic filming of the lead-up to the ceremony ensured the audience felt part of the urgency and importance of the marriage of two lesbian icons, Del Martin and Phyllis Lyons. The video format and location of the Mayor’s Office gave a window on the public yet private occasion.

A community forum that was filmed by ABC TV’s program, Compass, followed the closing film. This film documented the revolutionary challenge to the homophobia of the Catholic Church by Sister Jeannine Gramick, an American nun. Titled In Good Conscience: Sister Jeannine Gramick’s Journey of Faith, this film, though too long in parts, conveyed her quiet strength in challenging an Order she had been part of for 40 years. Guest speakers at the forum, Monica Hingston (Cardinal Pell’s cousin) and Michael Kelly (Rainbow Sash Movement), provided an opportunity for an open discussion of human rights, sharing their experiences as Gay and Lesbian Catholics.

The films screened at this years queerDOC film festival were diverse enough to cater for the many and varied interests of the queer community. Topical issues such as gender fluidity, body modification, same-sex marriage, youth and the impact of politics on sexuality were reflected in the programming. The choice of The Valhalla for the festival seems to be a good one for queerDOC.