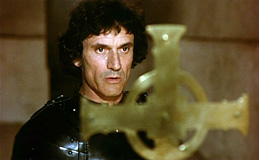 At the very heart of Lancelot du Lac (1974), Robert Bresson places a single, resonant shot: Lancelot (Luc Simon) comes through a door and approaches a crucifix in the foreground of the shot, slightly out of focus. “Lord, do not forsake us. Do not forsake me”, he says, confiding, “I struggle against a death worse than death. Deliver me from a temptation I can hardly resist.” God does not respond; Bresson does. A true cinematographic master, Bresson would never have left the crucifix out of focus by accident; it remains so only with distinct purposefulness. In their relentless crusade for the Holy Grail, the Knights of the Round Table abandoned the teachings of the Lord they claimed to serve. Lancelot’s true focus is not on the cross, but on himself.

In the film’s prologue, the knights are shown killing and pillaging unrepentantly. The sequence is highly stylised to emphasize the brazen immorality of their actions. Perhaps the quest began as a noble one but, in Bresson’s view, the actual outcome was anything but. Yet the knights remain wholly unaware of the nature of their plight. They question whether God has forsaken them; never do they realize it was they who first forsook God. The will of the Round Table grew too strong, its knights too forceful. As the soothsayer at the film’s opening predicts, “He whose footfalls precede him will die within a year.” Artus (Vladimir Antolek), Lancelot and their compatriots attained more power than even they could wield, their legend and renown overshadowing their mere being. Indeed, Bresson considers their actions an affront to God himself. The knights became too dominant to abide humble, Christian lives, instead they transmuted the nature of the religion to meet their own purposes. As Guinevère (Laura Duke Condominas) reprimands Lancelot, “It was not the Grail, it was God you all wanted. God is no trophy to bring home.”

Bresson instills this notion of transmutation in the core of the film. Particular attention should be paid to the picture’s climactic battle scene. Being a Bresson film, this is of course a misnomer: the scene is neither climactic nor focused on battle. The inherent intrigue provided by such scenes bores Bresson, who instead focuses on a separate meaning. Archers fire arrows; not one is shown hitting anyone. Consider what Bresson does show the arrows piercing: trees. The film returns to this sight on multiple occasions, using repetition to emphasize the images’ meaning. Yet depicting arrows piercing tree bark is far more than commentary on man’s destruction of the environment. Consider that these arrows are crafted from the wood of these very trees. As Bresson sees it, man has transmuted the trees’ nature – from bearers of life to harbingers of death – to suit his own self-interest. Apply a similar notion to the knights’ treatment of Christianity and Bresson’s vision begins to come into focus.

Yet the film’s ideas about transmutation of the innate extend beyond the mere implementation of Christian thought, down to the nature of man himself. Consider Bresson’s fascination with the knights’ armour, highlighted by its strangely overt presence on the soundtrack. Armour is used to shield, but not solely to ward off physical harm. The knights wear their armour in a subconscious effort to separate themselves from the frailty of corporeal existence. Arrogance has led them to believe their import has grown beyond that of the common man; continually wearing armour functions to further suggest this perceived disparity.

Finding clear distinction between themselves and the everyday peasant, the knights tire of their daily routine. It seems they are aroused only by the chance to satiate their common appetite for competition. The scene immediately prior to the deadly, final battle is perhaps even more important than the climax itself. Informed that Mordred (Patrick Bernard) has taken the castle, Lancelot, Artus and the surviving knights mount their horses to meet their adversary in battle. The air bristles with excitement, evidenced by Bresson’s uncharacteristically quick cutting. One by one, each knight closes the visor on his helmet. This ritualistic preparation is not shown to titillate the viewer. As the knights close their visors, the viewer loses sight of their faces, hallmarks of their individuality. This represents the last time Bresson shows any human countenances in the film. As a group, the remaining knights ride off to certain death, quelling individual qualms each likely has about the relevance of their actions. Of all Lancelot du Lac‘s transmutations, perhaps Bresson finds this most resonant: man’s strange compulsion to subjugate his most ingrained of natures, his instinct for survival, to quench an unearthy thirst for destruction.