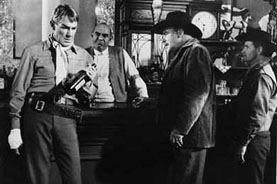 Between 1949 and 1960, Randolph Scott and Harry Joe Brown produced 14 Westerns, known collectively as the Ranown group or cycle (1). In each of these medium-budgeted films, Scott played typical Western heroes. However, as these films progressed, they began to play with the notion of the Western hero; questioning his motives, psychological states, and relationships with women. No longer was Scott the strong silent type; his characters were becoming mentally unstable and unhinged by the random violence of the Old West. Paralleling the development of the Ranown films was the idiosyncratic and inconsistent career of film director Oscar “Budd” Boetticher. In his films, Boetticher too questioned the psychological states of his heroes, toying with his central characters and their abilities to bring about a satisfactory conclusion. When Scott/Brown and Boetticher came together to produce the last five of the Ranown Westerns, their mutual visions were ideally suited to each other (2).

Decision at Sundown is the second film in this collaboration. It tells the story of Bart Allison (Scott), a Texan who has come to the town of Sundown seeking vengeance for the death of his wife. Aided by his friend Sam (Noah Berry Jr.), Bart intends to kill Tate Kimbrough (John Carroll) for his involvement in Bart’s wife’s death. However, this day is also Kimbrough’s wedding day. At the ceremony, Bart disrupts the proceeding to announce his intentions to kill Kimbrough by the end of the day. Having caused a huge uproar, Bart and Sam flee the church in a hail of gunfire and barricade themselves in the livery stable, thereby thwarting any possible completion of their plan. Although they are trapped within the confines of the livery stable, there is no impediment on the action. Bart’s presence in Sundown serves as a catalyst for the breakdown of the established social order.

Similarly to Anthony Mann’s Westerns of the period, Decision at Sundown uses Western geography to parallel the hero’s psychological state. But in contradistinction to Mann, Boetticher does not employ jagged panoramas to symbolise inner turmoil; rather he uses small, claustrophobic environments to place his self-serving characters: the saloon, the church, and domestic interiors. In a Mann Western the hero moves into a larger geographic space, but Boetticher restricts his hero in Decision at Sundown to the cramped confines of the livery stable. This placement compliments both Bart’s ill-conceived plan and his fixated mental state. As the film progresses, we discover that his motive for vengeance is less than heroic. Sam reveals that Bart’s wife had an affair with Kimbrough and committed suicide after its termination. Moreover, when this truth is revealed, the audience discovers that Bart is fully aware of her past acts. However, he has chosen to disregard his wife’s infidelity. Bart no longer appears to be driven by some gallant notion of honour and dutiful retribution, but he is now seen as a man haunted by his tarnished pride and obsessed with meaningless vengeance.

As a filmmaker, Boetticher was very skilled at creating precise action sequences. Andrew Sarris has equated this ability with Boetticher’s background as a matador in Mexico. He states that Boetticher was no stranger to the nuances of machismo, that overweening masculine pride that provides both a style and a fatal flaw to his gun-wielding or cape-flourishing characters, and his timing of action is impeccable (3). In Decision at Sundown, the shoot-outs are depicted in a series of closely cut shots. Like the matador, Boetticher carefully choreographs the action, and then, like in a bullfight, the thrill is over in the blink of an eye.

However, Boetticher’s films are more than just a series of precise action sequences. As Jim Kitses has noticed, Boetticher’s films are comedies, deeply ironic works that contrast to the tragic world of Mann by being bittersweet reflections on the human condition; an agreement to reject the simplistic notion of good and evil and to recognise that violence and injustice are less the property of malignant individuals than the world itself (4). He continues by stating that within the Ranown films the world is finally a sad and funny place, life a tough, amusing game which can never be won but must be played (5). Moreover, life is not just made up of the bright moments of good humour or the dark moments of violence, but the continuum, a seasonal movement, a perpetual interplay of light day and following night (6). Hence, according to Kitses, these films demonstrate a movement from light to dark, and from comedy to violence.

However, Decision at Sundown has none of the interplay Kitses finds in the other Ranown films. Like the spatial confinement to the livery stable, the film stays on the dark side providing no light-hearted, bittersweet comedy to balance the brutal violence. The film is equally unrelenting in its condemnation of society. Everyone in Sundown is shown as despicable, cowardly, apathetic, and weak. But the greatest denunciation is reserved for the hero, Bart Allison. Unlike earlier Ranown films which toyed with the hero but always left him triumphant, the image of the Western hero is completely decimated in this film. Boetticher takes great pleasure in tearing apart his hero and prolonging his suffering. In the showdown between the sheriff (Andrew Duggan) and Bart, Boetticher snatches Bart’s victory away from him. Bart gets the first shot off, hitting the sheriff in the belly, but as he dodges the sheriff’s volley, he stumbles and rips open his gun-hand on the broken edge of a wagon wheel, further rendering him unable to complete his planned murder of Kimbrough. At every turn the viewer’s expectations of the hero are undercut, diverted from a triumphant outcome to a bitter defeat.

In addition to this, there are moments in the film where Randolph Scott takes on the visage of William S. Hart (7). This startling resemblance evokes Hart’s role of the vengeance seeker Blaze Tracy in Hell’s Hinges (1916); however, the righteousness of Hart’s vengeance is subverted in Decision at Sundown. Bart’s wife not only had an affair with Kimbrough, but it is also revealed that she had numerous affairs. Hence, Bart’s vengeance is not only revealed to be ignoble and obsessive, but also, ever-increasingly, deeply psychotic. Moreover, his attempt to gain gratification or psychological relief through Kimbrough’s death is further subverted by the intervention of Kimbrough’s mistress Ruby (Valerie French). In another act of Boetticher’s orchestration, Ruby shoots him in the shoulder, thus bringing an early conclusion to their shoot-out. Kimbrough leaves town defeated but not dead, and Bart retreats to the saloon where he gets stinking drunk. His obsessive vengeance has become frustrated insanity.

Decision at Sundown is a brutal study of a Western hero’s retribution turned to psychotic obsession. As the bartender (James Westerfield) tells the doctor (John Archer), “If you’d been tending bar as long as I have, you wouldn’t except so much out of the human race.” By the time of the film’s conclusion, it is clear that Decision at Sundown does not expect much from the human race either.