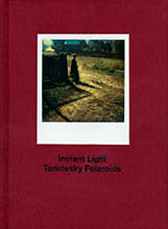 If only because of the softness of the image, and that unavoidably yellowy-brown colour palette characteristic of Polaroid snaps, these photographs could not deserve recognition on their own merits. But as artefacts from Andrei Tarkovsky’s life, they warrant interest in several respects. How are they to be viewed? As illustrations of the diaries and writings (1), family photos and glimpses of home life, records of location scoutings, “sketches” for future framings or compositions, sight-seeing photos from his time in exile in Italy? All these. And, in the blurred softness of the Polaroid image, all these aspects merge, linking life to work in the locations and locales of both. Had Tarkovsky been equipped with a Nikon and black and white Ilford stock, for example, the resultant definition would have revealed his intentions without such fruitful equivocation. But here we have only a handful of Polaroids, half a dozen or so cartridges’ worth, and generalisations and observations have to be qualified. And, necessarily, the photos have been curated by others. They are introduced as “something to be shared” (p.9), so bringing the viewer into the equation, rather than as an embodiment of something particular or pertinent about the photographer, his life and work.

The photos presented, some 30 from Russia and 30 from Italy, 1979–1983, are in good condition, without fading or surface damage. They are beautifully rendered by Thames and Hudson, individually on thick pages, and with a binding suggestive of a photo album. Captions are drawn from both Time Within Time and Sculpting in Time. The volume is book ended by essays – A Fond Farewell by Tarkovsky’s friend and collaborator, the foremost Italian screenwriter Tonino Guerra, and photographer Giovanni Chiaramonte’s The Image as Remembrance.

The philosophical-methodological stance that unites the films and Polaroids is very evident: a praxis born of a respect for reality. Tarkovsky accepts the very palpability of physical reality, lends a moral weight to it in its reproduction, so that the world around is a near-physical presence in the mise en scène. Such a philosophical-methodological stance is articulated, appropriately enough for a filmmaker whose “spiritual” concerns would otherwise equate him with an otherworldliness, in a prayer from the diaries, reproduced next to a figure (Larissa, his wife) in Tarkovsky’s village of Myasnoye:

Lord! I feel You drawing near,
I can feel Your hand upon the back of my head.
Because I want to see Your world
As You made it,
and Your people
as You would have them be (p. 30)

Here the otherworldly is more than just “behind” Tarkovsky, as he surveys the world. The image of the unseen hand on the back of the head suggests a puppet-master’s control of the head – the hand of the Lord literally directing the line of vision on the world.

Compare this to Bob Marley’s understanding of that same hand (“the hand of the Almighty”) which, in Redemption Song, “made strong” the hand of the captive so as to gain emancipation from the “merchant ships” and slavery (2). Both hands galvanise the subjects, to work within their milieu, while at the same time, so it would seem, necessarily abandoning the subjects within that milieu to make their own way. In short, Marley’s and Tarkovsky’s Lord is not that of the “veil of tears” or a via negativa (the philosophical and methodological stances of the otherworldly, respectively), but one that demands an embrace of life.

Tarkovsky would have perhaps considered the comparison blasphemous, but does this image, in his prayer, not also mimic the position of the auteur? Tarkovsky-camera, the Almighty-auteur and the surveyed world a constant. And Tarkovsky, here, like God, saw that “it was good”. So why amend the world? And is not the Polaroid camera, which Tarkovsky first used in 1977 (p. 7), the ideal device for the spontaneous reaffirmation of “Your world”? Such spontaneity is evident in Gerald Manley Hopkins’ nature mysticism too; Hopkins avoids the considered “establishing shot” so as to exclaim, to give the oft-quoted example, “Glory be to God for dappled things – …” (3) With the Polaroid, Tarkovsky is able to live in just such a moment of spontaneous thanks-giving and wonder (4).

Thus Tarkovsky frames nature “as found” just as, in his long takes, he reproduces, via temporality, reality as it occurs. There is no distortion or degrading of the images in the Polaroids, no impressionism sought through certain angles. Distance is often maintained; a genuflection before the vista rather than an excursion into it. And that finding, for Tarkovsky, comes from a “stilling” of nature, or action. Characters are often posed, framed centrally, never caught on the hop, unawares or smiling defensively. Even water is stilled. And Tarkovsky seems to prefer the quietest time of the day for the Russian photos too; 6.30–9 am or so on summer mornings, across that time when the early morning mist, low on the ground, dissolves with the onset of the kind of sunlight that intensifies quickly and seeps through foliage, drying out bark, grass, leaves and mud. The mise en scène of the alien zone in Stalker (1979) and the opening sequences of Solaris (1972) seem drawn from either end of this time period respectively. It is the world in daily transition, to exaltation.

A degree of excursion over distance is evident in the Italian photographs. This is a landscape with which Tarkovsky seems less familiar – seeking out images that re-orientate him (invariably ancient semi-ruins, the Italian sequence ends with location shots for the spa that would soon be used in Nostalghia [1983]), and familiar faces. Or just striking “sights” – a cemetery, a ruined factory, streets and rooftops. Here Tarkovsky plays with light and shadow, mostly abandoning the aesthetic equilibrium of the Russian images. The shadows are used to frame and the light is filtered through windows and flowers in a number of “still life”-style compositions, or diffused through mist. Tarkovsky here focuses on the minutiae and the anonymous (a newspaper cast on a floor, a figure in a church) as if to begin a process of familiarisation with Italian light. There’s something here of that very particular dry summer heat and white sunlight of Italy, un-tempered by coastal breezes. It bleaches colour and crowds out shadows (a tendency Tarkovsky seeks to reverse, or contain, with his framings). Pasolini’s Accattone (1961) contains this light. In Bertolucci’s “Chianti-shire” (5) of Stealing Beauty (1996), you can see that the ex-pats have attempted to tame the natural environment with stone shelters from that light.

For their contribution to an empathy with a figure who otherwise remains frustratingly elusive and fragmented (the diaries have as many versions as translations, and endless questions concerning the life remain unanswered), these photos are very welcome.