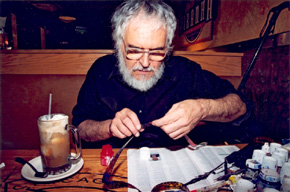 On March 9, 2003, the airplane that was taking me from Chicago to New York for a short visit encountered unusually violent turbulence, and of a type I’d never felt before: a few very sharp and abrupt jolts made it seem as if the fabric of space were being ruptured. That night, I learned that Stan Brakhage had died in Victoria, British Columbia, a bit over an hour after the turbulence I’d encountered. The time of that turbulence was roughly coincident with Brakhage’s last moments of consciousness.

I have never believed in psychic action at a distance, and have always taken events such as this one as coincidences, but the fact that I took the trouble to check the time of the turbulence against the time of his death shows that even a non-believer such as myself can harbor atavistic superstitions. The operating myth that I insist I don’t believe is that the consciousness of Stan Brakhage had such power in the world that his passing created sudden vacuums in the air — as far away as the other side of the continent.

The facts of Brakhage’s life are readily available: born on January 14, 1933, adopted as a baby, raised mostly in Colorado, an aspiring poet who discovered cinema while still in high school and completed his first film in 1952 shortly after dropping out of college, he made almost 400 films over the course of his half-century career, ranging in length from nine seconds to four and a half hours. Some are completely “abstract” (a word he hated); others are apparently abstract but full of suggestions of things seen (anyone who has been to Chartres cathedral will recognize the echoes of its famous windows in Chartres Series [1994]); others use photographed imagery in a way that undercuts the associations one brings to it; others depend on the associations one brings to their photographic imagery for much of their meaning; still others come surprisingly close to observational documentaries, while still remaining light poems. More often, a single film will seem to be most or all of the above.

Brakhage’s great subject was light itself, its infinite varieties seen as manifestations of unbounded and unrestricted energy and its concretization into objects representing the trapping of that energy, and his great desire was to make cinema equal to the other arts by using that which was uniquely cinematic — by organizing light in the time and space of the projected image — in a way that would be worthy, structurally and aesthetically, of the poetry, painting, and music that most inspired him. The subtleties of his work, the intricacy with which he used composition and color and texture and rhythm, resulted in films that virtually demand multiple viewings. The best known and most important of avant-garde filmmakers, he was also in my estimation among the half-dozen greatest filmmakers in the history of the medium — and, as I believe time will establish, one of the very greatest artists of the 20th century in any medium.

Brakhage’s enthusiasm for cinema extended beyond his own filmmaking practice. A teacher of film history for three decades, first at the School of the Art Institute of Chicago (to which he commuted from Colorado) and then at the University of Colorado at Boulder, he showed — and advocated for — a wide variety of films, including some that he didn’t necessarily consider art. (Some of those lectures were collected into three separate books.) All his life he argued for the work of other avant-garde filmmakers, from his early activities in preserving and making available the films of Christopher Maclaine, to his tireless advocacy for the work of the little-known Canadian Jack Chambers, to the way he championed and personally encouraged many younger filmmakers over the decades. Tall and imposing, a commanding presence in person, he could also interject drama, not always with the best of results, into a lecture or an argument even as he tried to exclude it from his films.

His central achievement is often seen as the personalizing of the medium, his transformation of the projected image away from the relatively neutral record of the world to which documentaries aspire to an expression of an individual’s emotions, ideas, dreams, fantasies, visions, eye-music, closed-eye seeing, and nightmares. To achieve this transformation he marshaled — and in some cases pioneered — a daunting panoply of techniques, from out of focus and over and under exposure to rapid editing to painting directly on the film strip to anamorphic distortion to collaging objects directly onto celluloid to heating raw stock before exposure. Hand holding his camera allowed him to transfer his own physiology to film, through a controlled use of jiggle that suggested his pulse and heartbeat.

But “personal” cinema is in some sense too easy: almost any film student can figure out how to use imagery and editing to express an emotion, and Brakhage always meant to present much more than the affections. More significant is the way that his films elude predictability. There is, of course, none of the arc of anticipation created by conventional narrative, but his films are also less predictable even than those of most of his colleagues. At the moment that a few seconds of a Brakhage film appear to be establishing a pattern, he breaks the pattern, and his purpose in doing so was not simply to be contrary. At the center of his ethos is a desire to create a filmic parallel to what Gertrude Stein, a major influence, called the “continuous present.” His films don’t present themselves as a mappable terrain each part of which helps one understand the other — and in that sense his work is the antithesis of Peter Kubelka’s, though they admired each other’s achievement — but rather they continually locate, and relocate, the individual viewer in the perceptual instant. While the paragraph about trying to imagine childhood vision that began his first book, Metaphors on Vision, is his most-often quoted statement, less often mentioned is the desire, expressed in that same paragraph, to try to experience everything in life as “an adventure of perception.” But “adventure of perception” is what his films aspire to: his avoidance of predictable forms places the viewer at the center of a figuring-out process that will not only be different for each viewer but is never intended to lead to a fixed conclusion.

One small detail of Brakhage’s work that all too often gets left out is that his films are stunningly, even ravishingly beautiful. It’s no easy or static prettiness that he was after, but the kind of beauty that cleans out one’s sensorium, that seems to scour one’s sight all the way from the cornea to the optic nerve, that reorients the very way one sees. Brakhage’s films serve as eye-training, both for seeing other films and as an opening onto more imaginative ways of seeing the world. If I had a friend who wanted me to teach him how to look at films, and unlimited access to an archive of world cinema, I’d begin with a couple of months worth of Brakhage.