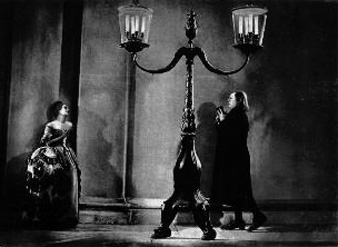 The art of F.W. Murnau has always defied easy categorisation, a fact which may be taken as an indication of its richness and complexity. The brooding menace of Nosferatu (1922) seems worlds away from the tragi-comic ironies of The Last Laugh (1924), which are in turn far removed from the melancholy romanticism of Sunrise (1927) and City Girl (1930). The linking threads are thematic and stylistic: a growing dedication to the potential of the moving camera, and the pervasive theme, identified by Robin Wood, of the couple under threat from a destructive force. Another thread is Murnau’s commitment to the concerns of German romanticism: in his adaptation of Goethe’s Faust (1926), in his study of the tormented artist in Der Gang in der Nacht (1920), and in the nostalgic primitivism and fatalism even of his last, most personal film, Tabu (1931).

Among these Tartüff (1925), an adaptation of a play by a pre-eminent author in the tradition of French classicism, might seem a paradox or an exception. Molière’s polished cynicism seems a world away from Murnau’s romanticism, and the film is at first sight atypical – a fact which may explain its unjust neglect. In contrast with the evocative use of natural landscape in Nosferatu and City Girl or with the studio-built worlds of Faust and Sunrise, Tartüff is essentially an interior film, betraying its roots in neo-classical theatre with its setting confined to a single chateau. Likewise, the camera style displays a distinct economy compared to the extravagant tracking shots of Murnau’s then recent tour de force, The Last Laugh. Here, the only camera movements are pans: a stylistic decision which again imbues the film with an air of classical austerity.

Yet Tartüff is unmistakeably a Murnau film. His recurrent theme of the couple under threat is clearly present in Molière’s story of an aristocratic husband estranged from his wife by his growing devotion to the sinister confidant, Tartüff. Emil Jannings, later to be Murnau’s Mephisto, gives a characteristically grotesque performance in the title role – dressed in clerical garb, his gestures and insinuations nonetheless carry an air of the diabolical. His presence contrasts powerfully with the plushness of the chateau sets, lending greater intensity to the theme of the incursion of a destructive force in the world of bourgeois normality.

Subtextually, too, the film is unmistakeably Murnau’s. An undercurrent of homosexual implication is detectable as Tartüff replaces the countess in her husband’s affections. The countess retaliates by attempting to demonstrate Tartüff’s hypocrisy, arranging an assignation with him at night which her husband is intended to witness. In a brilliant mirror shot, Tartüff, on the verge of succumbing to temptation, resists when he catches sight of the watching count’s distorted reflection in a polished pot on the table. Though his overt motives are practical, there is a subversive visual hint that he is affected, rather, by the presence of his original object of desire.

The theme is made clearer in the modern framing story which Murnau added to Molière’s text. The main section ends, like Nosferatu and Sunrise, conservatively, with the reunion and celebration of the bourgeois heterosexual couple. The framing story inverts the trajectory: here, a young man uses Molière’s story to free his misguided elderly relative from the malign influence of his female housekeeper, so that the film ends with the celebration of masculine solidarity and homo-social bonds. Here, at any rate, it was Murnau who had the last laugh.