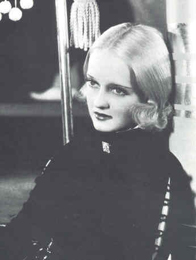 While Ex-Lady deserves to be overshadowed both by better pre-Code romances and stronger Bette Davis performances, it is still a fascinating example of how films of the period challenged traditional notions of love and marriage. It was the first film to headline Davis and she felt the star treatment was premature. Though her popularity among audiences, critics and exhibitors was sufficient to make her name marketable, she had not yet found her niche at Warner Bros. studios. The quality of her films had been disappointing for the most part and her only exceptional role to date had been as a seductive southern heiress in Cabin in the Cotton (Victor Fleming, 1932). She was mortified when the studio decided to give her the glamour treatment for the film. Her costumes included low-cut pajamas and sleek gowns and she was photographed in carefully lit close-ups that accented her Jean Harlow-platinum hair. In her autobiography she would say of the film, “it is a part of my career that my conscious tastefully avoids. I only recall that from the daily shooting to the billboards falsely picturing me half-naked, my shame was only exceeded by my fury” (1). She was correct in feeling the film was a misstep; it was only moderately successful. However, she is a strong element of this still pleasing pre-Code exploration of marriage and relationships.

Davis plays Helen, a talented freelance artist so much in demand that she works on Sundays. She is in love with Don (Gene Raymond), who owns an advertising agency, but does not enjoy the level of success that she does. While Don playfully notes that he should be disturbed by Helen’s fruitful career, he is more perturbed that she refuses to marry him. Helen enjoys the freedom that her success allows her and tells Don that marriage means compromising her lifestyle, which is as good as defeat to her. Instead it is Don who must compromise; they live together secretly – or so they think.

Helen’s father (Alphonse Ethier) storms into their apartment one morning, with her mother (Bodil Rosing) clinging to his arm. He berates his daughter for being “cheap” and goes to the bedroom to confront Don. As Helen’s mother huddles near her in the next room, she seems more frightened of her husband than concerned for her daughter’s morality; she even tries to calm her husband enough to discuss the matter rationally. Perhaps she admires Helen for insisting on the freedom that she also craved, but never had. Helen placidly rejects her father’s old-fashioned viewpoint, but within days she proposes to Don anyway. Though she gives no specific reason for changing her mind, she doesn’t seem to have made the decision to please her father. Instead, she appears to be acting out of affection for Don, and as far as his business goes, possibly out of concern that he needs her help.

Once they are married, Helen gives up her freelance career to be Art Director and Junior Partner in Don’s firm. They take an impulsive honeymoon and it practically destroys the business. Suddenly, there is tension in the relationship. Helen betrays Don when she secretly accepts an assignment from a competing company. He responds to her “infidelity” by accepting a date with a trophy wife (Kay Strozzi) who is eager to cheat on her dull husband. In short time, Helen decides that their marriage has been a mistake.

Part of Helen’s difficulty is that she is surrounded by people with widely differing views of marriage and commitment whilst none of them are in happy relationships. In addition to the unfaithful wife there is Nick (Monroe Owsley), who doesn’t want to marry because he wants sex without commitment; Van (Frank McHugh) who is horrified by the modern, independent woman, but still propositions Helen; and his frustrated wife (Claire Dodd) who tries to make him jealous in order to force him to show passion towards her. The group does not offer an appealing alternative to the strict tradition Helen’s father preaches. While he says she is “cheap”, Nick accuses her of being “hopelessly old-fashioned”.

With a lack of good role models, Helen can’t be blamed for trying to make her own rules for happiness. Davis is quoted in the film’s press-book saying of Helen, “She never will be satisfied until she has every right that a man has” (2). When Don says he wants to marry Helen to have the “right to be with you” she responds, “nobody has any rights about me, except me”. She doesn’t want to live her mother’s life, but she struggles to reconcile her desire for freedom with her love for Don. When she finally adapts her idealism to the reality of their relationship, Helen realises that compromising is not admitting defeat, but a necessary sacrifice for a successful union. She accepts compromise, but keeps her feminist stance, refining it to accommodate the one she loves.

In their experiments testing the boundaries and conditions of marriage, Helen and Don are typical pre-Code characters. Films such as The Divorcee (Robert Z. Leonard, 1930) and Consolation Marriage (Paul Sloane, 1931) portrayed couples in similar pursuit of a modern and equal romantic union. The relationships in these films were more complex than the unwavering odes to marriage that dominated Hollywood films during the reign of the Production Code. By the fade-out of Ex-Lady, all seems well between Helen and Don, but listen carefully to what they say to each other. It is a qualified happy ending; it is still not certain whether or not they have agreed upon marriage.

A year after the release of Ex-Lady, both Davis’ career and filmmaking in Hollywood would undergo dramatic changes. After fighting Warner Bros. to be allowed to go on loan to RKO, Davis won respect for a forceful performance in Of Human Bondage (John Cromwell, 1934) and her star began to rise in earnest. That same year, the Production Code was finally strictly enforced and mature romantic relationships would essentially disappear from Hollywood films in the decades to follow.