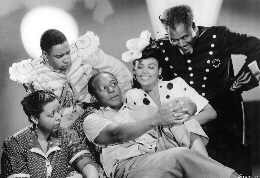 Cabin in the Sky is a faux naïf parable of faith, temptation, loyalty, and salvation in the imagined life of American black people, told as a musical play by black actors and white studio filmmakers at MGM in the middle of World War II. The film is at the centre of the six all-black cast films made by the major Hollywood studios: Hallelujah! (King Vidor, 1929); Hearts in Dixie (Paul Sloane, 1929); The Green Pastures (William Keighley and Marc Connelly, 1936); Cabin in the Sky and Stormy Weather (Andrew L. Stone) both 1943; and Carmen Jones (Otto Preminger, 1954). And it is the feature film debut of Vincente Minnelli, selected because of his experience and expertise in designing and directing theatrical musicals in New York (on Broadway and in nightclubs).

Like Green Pastures before it, Cabin in the Sky had been a hit Broadway show (Ethel Waters starred in the play as well). Black representation in live theatre was on the rise in the US in the first half of the 20th century: Jerome Kern and Oscar Hammerstein’s Show Boat (1927) pioneered the modern, thematic style of musical theatre, presenting a sub-plot about inter-racial marriage sympathetically; George Gershwin’s Porgy and Bess (1935), an all-black opera, quickly became a standard production, frequently revived; both are highwater marks of musical theatre in a context of black musical revues on and off Broadway and black performers in variety and on radio. Among Cabin‘s cast, Ethel Waters was the pre-eminent black female star of stage musicals, radio, and popular (not race) recordings; Eddie “Rochester” Anderson was at the time a radio star on The Jack Benny Program; Lena Horne was one of the first black performers to be groomed for glamour stardom by the major studios; and Duke Ellington’s orchestra was the top black jazz band in concert, on radio and recordings, and in films. And in this film, Minnelli, Freed, and MGM give their black performers full studio star treatment.

Films with all-black casts had been made for and distributed to black audiences by independent production companies from the ‘teens on, but they were clearly not a Hollywood staple. But by the middle of the war years, the efforts of black lobby groups over the years to reform and increase black representation in Hollywood films (particularly the National Association for the Advancement of Colored People – NAACP) were now joined by white groups from the left, government agencies, and the Roosevelt White House, anxious to present blacks and their place in the war effort in a positive light – both to blacks and to white society as well (at the same time, such pressure resulted in the 1944 release of the documentary The Negro Soldier, directed by Stuart Heisler under executive producer Frank Capra). (1) Stone’s Stormy Weather is much more explicit in its pro-military propaganda and, unlike Cabin, is a realist back-stage musical crammed with black celebrity performers.

Cabin in the Sky is not realist in style: it is an elaborate and theatrical fantasy (“folkloric”, James Naremore calls it) set out as the fever dream of an everyman character (Little Joe) who wants to be as good as his very Christian wife but is tempted by the weakness of the flesh; in his dream, the agents of God and the Devil compete for his soul (2). In this, it takes its place in another cycle of films, fantasies about ghosts, supernatural agents, heaven and hell: Topper (Norman Z McLeod, 1937, and its subsequent sequels); Green Pastures and The Ghost Goes West (René Clair), both 1936; The Wizard of Oz (Victor Fleming, 1939 – Cabin in the Sky recycles the tornado that takes Dorothy to Oz); Here Comes Mr Jordan (Alexander Hall, 1941); Heaven Can Wait (Ernst Lubitsch) and A Guy Named Joe (Victor Fleming), both 1943; The Canterville Ghost (Jules Dassin, 1944); Stairway to Heaven/A Matter of Life and Death (Michael Powell and Emeric Pressburger) and It’s A Wonderful Life (Frank Capra), both 1946; and The Secret Garden (Fred M Wilcox, 1949), among others.

Minnelli, the beginner, has a very steady hand with camera movement, blocking actors and movement, and particularly with his then very cutting edge Africanist/surrealist production design. The performances are required to be charming, deft, and knowing in order to offset the stage devices and camp of it all, and they are. Ethel Waters sings very effectively with her trademark enunciation and phrasing. Louis Armstrong, on the evidence here, could have had a much greater acting career than he had; his jazzy assistant devil is very bright. The set-piece scene in the night-club – starting on the street observing dancers on the way into the club, each with their own set of moves, then following them in with a fluid crane shot crossing the dance floor, documenting the dancers, and finishing on the bandstand and Duke Ellington – is a highpoint (the tenor sax featured here certainly sounds like Ben Webster). Also in this scene is a knockout feature dance number to “Shine” by John “Bubbles” Sublett, who created the role of Sportin’ Life in Porgy and Bess.