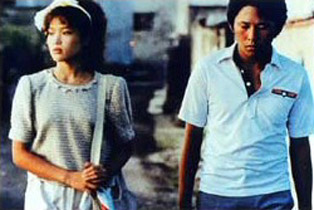 Every once in a while I have what I like to call a ‘Hou Hsiao-hsien moment.’ A recent example: I was in my backyard gathering stones for my wife to use in her art thesis project, when I realised that, ten or twenty years from now, I might look back longingly on this moment of my life in all its sensory details: the rich red paint that coats the aluminium siding of the two-family house I live in; the quirkiness of its backyard with the dilapidated beer garden benches set up by my Greek landlady; the occasional rumble of a truck along the main drag beyond the fence. This is the same feeling of sensory nostalgia that I get while watching Hou’s movies, and while he’s certainly not the only filmmaker who can evoke this response in a viewer, there’s no one who does it quite like him.

The idea of history as a fluid relationship between past and present has been a constant throughout Hou’s films. Certainly this is the case with his period films: the ‘Taiwan trilogy’ of A City Of Sadness (1989), The Puppetmaster (1993) and Good Men, Good Women (1995); or Flowers Of Shanghai (1998), stunningly set in a 19th century brothel. In these films Hou brings the past stunningly back to life by immersing us in the sensations of its moments. But looking at his films set in contemporary Taiwan, the opposite effect seems to occur: there’s a sense of experiencing the present as if filtered through contemplative memory. A look at The Boys from Fengkuei presents an opportunity to explain the uniqueness in which he historicises the present.

The Boys from Fengkuei opens with an extended montage of “Hou Hsiao-hsien moments” that unravel like a gentle breeze, yet in their casual accumulation map the film’s rural setting with stunning clarity. A series of affectionately composed establishing shots of the seaside town elides into a shot of an unidentified game being played by children, followed by a long shot of a boy being pushed to the ground by a gang of ruffians. None of these shots are garnished with the expository foregrounding rendered by voice-over or some other explanatory device that one finds in a conventional narrative film. The emphasis is placed first and foremost on the moment, on sound, image, positions, gestures and sensations. To risk a pun, Hou’s manner of storytelling has a disorienting effect for the viewer, if only to reorient them squarely in a way of viewing that prioritises the unmitigated experience of the moment above narrative preoccupations.

Much of this recalls Ozu, and indeed Hou has been compared more often to Ozu than to any other filmmaker – the wordless establishing shots that open the film would seem an obvious tribute to Hou’s predecessor were it not true that Hou had never heard of Ozu until late in the 1980s. But I happen to find just as much grounds for comparison with a half-dozen other directors. While Hou’s editing resembles Ozu, his emphasis on long shots is akin to Mizoguchi’s extended, carefully composed long takes from a relative distance. In long shots faces are barely discernible, often deliberately turned away from the camera. The emphasis then is placed on forms: how bodies are positioned and postured, how they move in relation to other bodies and the entire frame. The film’s ostensible topic, the cavalier lifestyles and burgeoning frustrations of vagrant youths, is Martin Scorsese territory: lives spent in the dogged pursuit of pleasure, with unexpected eruptions of violence lying in wait (the Scorsese link is reinforced in Goodbye South, Goodbye). An insistence on the lyrical qualities of the image recalls Terrence Malick above anyone else – there are so many beautiful visuals here that burn into the memory: a man sitting placidly on a front porch with an enormous dent in his forehead; the boys doing an impromptu dance in front of waves crashing majestically against a breakwater; a close-up of a pen drawing zigzag lines around a bug that’s been pressed into the pages of a notebook (it’s interesting that Hou saves the majority of his close-ups for objects rather than faces – like his colleague Edward Yang he finds everyday objects to have as much to say about human lives as humans). These images all have a self-contained clarity to them, where the profoundness of the image in and of itself precedes its function in advancing the narrative. It resembles the uncanny qualities of childhood memory.

This quality of cinema as an act of remembering is reflected in the syncopated rhythms of his narrative – one doesn’t quite see how one scene connects to the next until several seemingly non-related moments have passed, building towards a lasting cumulative impression that registers most clearly when played back in one’s own mind. This aesthetic is conveyed most brilliantly in a sequence inside an art theater where the boys are watching Visconti’s Rocco And His Brothers (1959) as it turns out, to see some Italian female skin. A shot of the fetching Annie Girardot rubbing her legs onscreen leads inexplicably to a shot of Taiwanese people playing baseball on an open field – only the audio of Rocco runs through what otherwise seems to be a non-sequitur juxtaposition of images. A man gets struck on the head by a fastball, sending him to the ground, which recalls the earlier image of the man with the dented head. The shot of the man sprawled on the baseball field then cuts to a shot of Ching-tzu – and then it all comes together: the dent-headed man is Ching-tzu’s father; the image of sex onscreen triggers Ching-tzu’s guilt-ridden thoughts back to his family trauma. What’s more, with the seamless transition of Rocco playing on the screen to Ching-tzu’s flashback, Hou effectively projects Ching-tzu’s memory onto the screen, replacing the actual movie being played in the theater: not only is this a more subtle rendering of the central idea behind Buster Keaton’s Sherlock Jr. (1924), it is an emblematic moment in Hou’s cinema of memory.

I find the first half hour of The Boys from Fengkuei so evocative in its formal implications that the rest feels a bit anti-climactic. There’s not much inherent drama in the boys’ shiftless odyssey from the small town to the city, other than the unrequited romantic longing that Ching-tzu develops for a hoodlum’s girlfriend (anticipating the central conflict of Edward Yang’s magnificent A Brighter Summer Day (1991)). Gradually the overall aimlessness threatens to overcome the film’s attentive nature. Nonetheless there are several other remarkable moments throughout the film. Another attempt by the boys to watch a dirty movie leads them to a gutted high-rise with a magnificent view of the city; it’s even framed in wide-screen by the busted walls. Another scene in a theatre features a jarring juxtaposition of classical Western music playing non-diegetically and a kung-fu sequence from Yuen Woo-Ping’s Drunken Master (1978). Uncharacteristically for Hou, there’s a liberal use of classical music in this film, which seems clichéd by Western ‘serious movie’ standards but in a Taiwanese context may help distance the viewer from the story in a way that aids Hou’s purpose of contemplating and commemorating the way of life depicted on-screen.

In his later films Hou would evolve away from (some would say repress) the sentimentality that pervades his 80s films. The ending of this film, Ching-tzu shouting in a street filled with impassive passers-by, is certainly sentimental, but there’s also something more than pathos at work – it’s a moment that crystallises what this film has been about all along: the sense of one’s helplessness against the passage of time, the present passing away before one’s eyes.