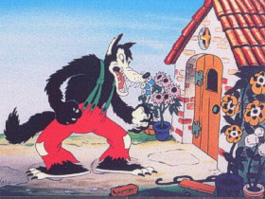 More so than in relation to the work of any other major American animation studio, it is now difficult to adequately account for and even imagine the pre-eminence the short Disney cartoon enjoyed in the 1930s. It is only when one places prominent examples of animated films produced by the various “Hollywood” studios at the same time side-by-side that an understanding of the significance and sophistication of Disney’s 1930s work comes clearly into view. Of all the short films produced by Disney in the 1930s, Three Little Pigs has some claims to being both the most significant and the most prescient. It is widely acclaimed as a breakthrough in character animation, leading the way for such indelible anthropomorphic creations as Bugs Bunny, Daffy Duck, Tom and Jerry, who dominated the various Hollywood animation studios from the late 1930s until the late 1950s. It also points forward to, and in some ways enables – partly due to its significant critical and commercial success, rare for a short animated film – the move into large-scale feature film production at Disney (pre-production on Snow White and the Seven Dwarfs [1937] began soon after the film’s release). It also prefigures the wholesale appropriation and some would argue bowdlerisation of European culture that became a Disney trademark of its films, television programs and theme parks; popular legends and fairytales, children’s classics and classical music. Three Little Pigs can also be considered more directly as an emblematic example of Disney short animation in the 1930s; exquisitely drawn and animated, jauntily scored, featuring fascinating details of character movement, but also a little light on laughs, a bit too repetitive, lacking in-depth characterisations, and morally preachy or unsophisticated in its ultimate, much commented upon “message”.

Three Little Pigs is generally regarded as the most successful short animation of all time. Many analyses of the film concentrate upon anecdotal accounts of wildly positive audience responses to the film, its extensive run in the cinemas, its promotion often above the feature film of the day, its widespread cross-promotional success (sheet music sales, dolls of the pigs and wolf, etc), and its extensive international distribution (1). Discussion of the film often then gets sidelined by accounts of Walt Disney’s rising fame and his work’s enthusiastic reception across various age, class and intellectual boundaries (often leading to an inevitable comparison with Chaplin, an equally global phenomenon) (2). For a contemporary audience Three Little Pigs suffers somewhat from its heightened reputation. It should be regarded as a nascent and somewhat experimental work – rather than as an exemplary manifestation of peak Classical Hollywood studio animation – that begins to explore the fuller dimensions of what character animation might mean in ’30s Hollywood. Many of the Disney sound cartoons which precede it are either somewhat scatological (many early Mickey Mouse’s, for example) or piecemeal in form (most of the Silly Symphonies which preceded Three Little Pigs) – a form that partly merged from the production processes employed at Disney, where specific animators would specialise in particular types of scenes and characters. Although, Three Little Pigs is by no means the first experiment in a more holistic form of character animation – some of Pluto’s films before it take strides in this direction – it does take this form of animated storytelling to a further, almost self-conscious level. By populating the film with three almost identical characters, the animators, dialogue writers and actors (providing voice characterisations) deliberately set themselves a technical and aesthetic challenge.

Another key to the exploratory nature and reputation of Three Little Pigs lies with the technical innovations practiced and consolidated by the Disney studio from around this time. For example, by 1933 Disney had cornered the market in colour animation, attaining a five-year exclusive deal with Technicolor. Thus, Disney was able to produce colour animations at a time when very few feature or short films utilised even the more primitive two-strip process. The simple fact of colour would probably have been enough to attract audiences but it is the expressive deployment of various tones and hues that is a key to Three Little Pigs success. In the process, colour becomes a key marker of both the difference and personality of the three almost identical pigs. Such distinctions are also reinforced by the slightly different actions and movements of the three characters (particularly between the two more frivolous porkers and Practical Pig, who of course seldom smiles and builds his house from bricks) and the objects they are associated with (the houses but also the musical instruments – the fife and fiddle for frivolity and play, the piano for solidity and deep-note sturdiness – that they play). Shifting colours and varied tones are also the key to illustrating the diminishing power of the Wolf – his reduction in size linked to the varying hues of his puffed-out face.

Another key expressive element of the film is its use of music and sound. Three Little Pigs does mark an interesting departure within the critically championed Silly Symphonies series. Rather than relying upon a stable of established characters – a practice which became the norm of studio animation, mirroring the star system of live-action production – this series was more concerned with illustrating and promoting music and furthering animation technique. Three Little Pigs is still predominantly structured around music – it is almost completely sung – but its performance is used to differentiate and help define the four characters that appear in the film. The film is also something of a departure for this series in that it only represents these four characters, allowing a degree of concentration and development of character and story difficult to imagine in the densely populated worlds that characterise most other Silly Symphonies. The success of Three Little Pigs probably emanates from this fusion of character and music; the song that was specially written for the film, “Who’s Afraid of the Big Bad Wolf?”, went on to become a major hit, prefiguring a trend central to many Disney animations to this day; while the pigs went on to star in three further cartoons, as well as feature in a small number of cameo appearances. These experiments in the fusion of character and music find their fullest expression in several subsequent Disney features such as Dumbo (1941), Bambi (1942) and The Jungle Book (1967), and such Chuck Jones Warners cartoons as Rabbit of Seville (1950) and What’s Opera, Doc? (1957).

Three Little Pigs is now also routinely discussed as providing a metaphorical representation of the fears and aspirations of the ’30s Depression. This is taken further by specific writers who perceive a directly analogous connection between particular figures in American politics at the time and those in the film (a comparison between Practical Pig and Herbert Hoover is suggested by one writer) (3). A more common approach reads the film as a broad survey or barometer of dominant attitudes towards the Depression and as a symbolic representation of the wolves “beating at the door” of American life. Nevertheless, the film is deliberately quixotic in its promotion of particular moral values. Two of the three pigs are shown as somewhat frivolous in their attitudes to security and work, but it is around them that many of the film’s most joyful and memorable elements – such as the song – circulate. Part of the effectiveness of Three Little Pigs lies in the relative openness and simplicity of its storytelling; the fairy-tale upon which it is based is pared-down to very rudimentary themes and incidents. A key to understanding why the film has been analysed as not just a work emerging from but about, as expressing, the Depression lies in both the overwhelming popularity of the film (it must then express some kind of dominant attitude or zeitgeist) and the status of Disney himself as a model of American success within the deprivations of the Depression and beyond (which, retrospectively, has led certain writers to read the film as a more conservative work than it probably is).

It is now a little difficult to understand the critical (and popular) preference for Disney films over the more dynamic work being produced at Warners, MGM (particularly by the late ‘ 30s) and by the Fleischers’ studio. Perhaps in the 1930s there was something universally understandable about the Disney cartoon that is absent in, for example, the endlessly topical references and parodic impulses of many Warners cartoons, or the more risqué but often mind-numbingly repetitive exploits of Betty Boop (and Pappy!). Whereas many Warners cartoons – particularly those from the late ’30s and ’40s directed by Bob Clampett and Frank Tashlin – tilt toward vertigo most Disney short animations are narratologically clear if often insubstantial, slight, gently funny and levelheaded. Overall, the Disney short animation is remarkable for its development of character animation (though not necessarily for its characters), its technical innovation, and for its ability to inspire flights of fancy, bitter satire and flattering homage from other studios. Friz Freleng’s timeless and genuinely musically – if not graphically – inventive Three Little Bops, produced at Warners in 1957, incorporates all three of these approaches. At a distance of more than 50 years (and 70 from Three Little Pigs itself) it is a little difficult to understand the large-scale attraction of many of Disney’s characters (especially Mickey), humour and moribund situations, but the craft, innovation and exquisite animation techniques are still evident. Three Little Pigs is a key watershed or stage in the formation of this mixed legacy.