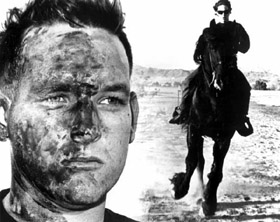 As ironic as it may seem, Los Angeles has been home to some of avant-garde cinema’s greatest legends, filmmakers working, so to speak, in the belly of the beast. The itchy, sometimes fractious cohabitation coincides with the birth of the studio system in the 1920s, and continues today, unabated. The late ’80s and early ’90s, however, mark a particular era, when the city served as the backdrop for a generation of filmmakers intent on depicting the alienation fomented by several years under Reagan and the gradual dissolution of a coherent feminist media agenda. The result was the burgeoning of a low budget independent feature film movement in the early ’90s with filmmakers such as Gregg Araki, Chris Münch and Allison Anders dedicated, at least initially, to rethinking dominant narrative paradigms and telling untold stories. Simultaneously, filmmakers such as James Benning, Betzy Bromberg and Pat O’Neill continued to make staunchly experimental films, well aware of their tradition’s waning audience and the dismal distribution options but dedicated nonetheless to pursuing aesthetic challenges.

It’s against this evolving two-decade backdrop that Los Angeles-based filmmaker Nina Menkes made her three feature films. A graduate of the UCLA film program, Menkes claims allegiance to no one in cinema history and eschews both the aesthetic and political pursuits of avant-garde cinema and the overtly theoretical challenges of feminist film theory. “The films I make come from an intuitive place,” the director has said, and indeed, her work burrows furiously inward, toward a space ruled by emotions and desires, ones that exist somewhere beyond or prior to the rules and regulations of a patriarchal culture. Resolutely working in film while many of her feminist colleagues opted for video and insisting on forging a cinema championing anti-heroines, Menkes has steadfastly limned the bloody, often horrific boundaries of a violated feminine psyche in films that are as visually stunning as they are conceptually challenging.

Menkes began her formal filmmaking career with the 40-minute film The Great Sadness of Zohara, which was finished in 1983. This film establishes many of the themes and formal patterns that recur in Menkes’ work, as well as introducing Tinka Menkes, Nina’s sister, who is the protagonist in Menkes’ three subsequent films and who works as Nina’s collaborator.

The Great Sadness follows the journey of Zohara from the streets of Jerusalem to the markets of Morocco and back again, a spiritual trek with no epiphany; instead, the trip illustrates and confirms Zohara’s radical alienation, evoked elegantly through precise framing and the deliberate placement of Zohara in various, often barren landscapes. The camera is most often stationary, holding a carefully composed frame through which Zohara moves. When the camera becomes mobile, as it does on a few occasions, the result is a terrible uneasiness, as though the ground were being pulled out from under it.

Menkes is also very conscious of colors in the film, using them to demarcate Zohara and her surroundings. In the beginning of the film, for example, Zohara appears dressed in brown, which clearly distinguishes her from the men around her, who are clad all in black. Later, Zohara awakens in a room bathed in an eerie light. The stark, black lines of her bed swoop across the frame in an attempt to anchor the shot, but to no avail – the light pouring through the window makes everything in the room weightless and airy, capturing a utopian dissolution of boundaries that almost always hovers on the edges of the otherwise terrible worlds occupied by Menkes’ hapless characters.

The film’s soundtrack similarly depicts real and unreal worlds. Menkes uses a mix of diegetic and nondiegetic sounds – we hear voices whispering, speaking, chanting and shouting, as well as peals of laughter and the ringing of bells. The sounds are neither entirely subjective nor exterior, but suggest a world of confusion.

In Menkes’ first feature, Magdalena Viraga (1986), the storyline is more pronounced. The plot is simple – a young prostitute has been wrongly accused of murder – and while the film may be seen as an unraveling of the truth and the eventual discovery of the true murderess, the mise en scène of threatening Christian iconography points to the implicit guilt of all women, subtly undermining the investigation’s centrality. What is important, however, is once again the figure in the landscape and the emotional tonality evoked through precise visual design.

As in The Great Sadness of Zohara, Menkes carefully composes each shot, and Ida, played by Tinka, either moves through the shots or remains adamantly still. Colors are also carefully chosen – Ida’s deep black eyes, flashing red lipstick and azure dress contrast with a bedroom of soft beige tones and a pale blue pool. The long take reaches an extreme in the film, but the beauty of the colors and the detail that Menkes is clearly asking her viewers to note makes such an extreme reasonable, and even pleasurable. The oscillation between Ida’s wrenching angst and the exquisite imagery of Menkes’ visual design eventually induces a sort of reconciliation, an absolving of polarities that, not by coincidence, is also the elemental work of magic.

Inspired in part by the work of Gertrude Stein, Mary Daly and Anne Sexton, Magdalena Viraga is difficult, discomfiting and complex, evoking a reality of experience rarely depicted. Menkes has described the film as a descent into the underworld, home of the monstrous or shadow feminine, and Ida consecrates her negative power as any true feminist sorceress when she chants thrice, “I am a witch.” 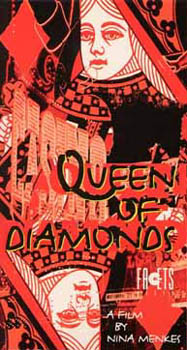 Menkes traces a similar path between two worlds in Queen of Diamonds (1991), although the protagonist of this film, Firdaus, is less a victim and more a translucent onlooker. Once again, most of the shots are studied compositions through which a story makes its way. The film is set in the Par-a-Dice casino in Las Vegas, and in the surrounding desert. Inside the casino, there is a cacophony of noise and lights, poker chips and the flash of cards across green felt tables. The scenes outside the casino are bright and clear. The sand is a glaring white, the sky a clear dark blue, the water sparkling in the sun. Night brings some eeriness – a dead cat and Christ upside down on a cross – but also extraordinary beauty when three elephants appear in a soft light and dance a slow dance, trunks and tremendous bodies swaying with an amazing grace.

The film has the clearest storyline of the three films, and also the greatest narrative subversion. Queen of Diamonds is roughly structured in three parts with a beginning, middle and end, but not in proper order. The beginning introduces Firdaus in a series of nearly static shots or tableaux. Again, some elements of a plot are suggested, and these are returned to at the end, but the emphasis remains on the isolation of the central character and a range of mythic connotations suggested by her link to the earth and landscape around her. If the casino and its strict, codified rules points to one kind of world, the mysterious, natural world with its uncanny events points to an entirely different realm, one denigrated by the rational order and capital-intensive economy that seemingly wields more power.

It is the film’s middle sequence, however, which is the most astounding. It is a 17-minute scene that deviates from the long, still shots preceding and following it, thereby hinting at a climax through a burst of action. The camera zooms and tracks and the editing is fast and furious, but the action, the climax so emphatically celebrated, is a bluff. Firdaus deals the cards, and deals and deals and deals in a scene that goes on relentlessly. As Menkes puts it, “Even when something is happening, nothing is happening,” a statement that sums up her disdain for the Hollywood hoax of creating something out of nothing.

Menkes’ third feature is The Bloody Child (1996), which centers on a true event – a US Marine was arrested for murdering his wife in the desert outside Twentynine Palms, a desolate town a few hours from Los Angeles and home to a large Marine base. Menkes combines footage that she shot in Africa showing Tinka ensconced in dark, jungle foliage, with a narrative account of the murder, with Tinka playing a Marine. Using repetition and a feeling of constant return, the story seems to circle around and around, revealing snippets of information slowly, almost hypnotically. Tinka and the jungle come to represent the repressed and damaged feminine psyche, and while the film is an indictment of violence of all forms, there is some measure of empathy toward the Marine who killed his wife.

Most recently, Menkes collaborated with the University of Southern California’s Labyrinth Project to create a CD-ROM titled Crazy Bloody Female Center, which takes viewers through the filmmaker’s body of work, moving fluidly from one film to the next in an almost vertiginous exploration of sexual malaise and oppression.

This stately rigor of all of Menkes’ work has led critics to compare it to that of Chantal Akerman and Michelangelo Antonioni. And one might find an allegiance, too, with Wanda (1970), in which filmmaker Barbara Loden traces the downward spiral of the eponymous heroine as she struggles to make it in a world that despises her. Like these filmmakers, Menkes tackles a particularly contemporary alienation, and like Akerman and Loden, she focuses on heroines who in some ways are utter failures. They’re the accused and abused, and yet Menkes never lapses into mournful lamenting over the state of the victim. Instead, she remains focused on conjuring elemental forces and exploring the mysterious and chaotic realms of beauty that come before the rules and regulations of culture.

If you’re interested in learning more of Nina Menkes and purchasing her work, visit Nina’s website at http://www.ninamenkes.com.