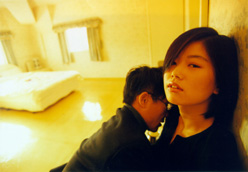 Jang Sun-Woo’s Lies (1999) first screened outside South Korea at the 1999 Venice Film Festival. It arrived with the reputation, or baggage, of being based on a banned pornographic novel and having been cut by Korea’s national censor for screenings in its home country. International festival screenings of the uncut version followed in a somewhat haphazard fashion. When I first saw Lies in Vancouver that year (1999) it drew packed houses and I assumed it was heading for the same “success” as other works of vivid, graphic filming of intense sexual relations. Last Tango in Paris (Bernardo Bertolucci, 1972) and In the Realm of the Senses (Oshima Nagisa, 1976) are its now somewhat distant predecessors. The major Australian film festivals shied away from Lies and it has been more than two years since the film’s acquisition for Australian release and its first (uncut) commercial screenings.

The first and lasting impression that one gets from Lies is the memory of all those welts across the backs and buttocks of its two actors. There is something strenuously and arduously “real” taking place between the two. Y (Kim Tae-Yeon) is an 18-year-old virgin. She is attracted to J (Lee Sang-Hyun), a 38-year-old sculptor with an absent wife. At their first meeting, J takes Y’s virginity. Before this, we have seen the two actors when Jang shows us a few moments from the tapes of their auditions for the parts. Neither has acted before but both are naively curious and somewhat excited about the possibility of getting into the movies. (1)

The welts on backs and buttocks are the second phase of the relationship between Y and J. The initial passion, a torrid scene of some pain filmed with an unblinking camera gaze, is succeeded by ever increasing adventures into sado-masochistic foreplay. The lives of the two are sketched but gradually their passion overtakes any interest or involvement in the ‘normal’, day-to-day world. Near the end of the film, and their affair, Y and J have completely cut themselves off from any ‘normal’ activity, like working to earn a living, studying and so on. They are fixed on pursuing a life of brutal sensuality, checking into and out of a series of cheap hotels and seemingly seeking ever more hurtful “pleasure”. Towards the end, they roam one city street seeking to find by chance any implements they may use to express their desire. They come across discarded lumps of wood with which to beat themselves and start exchanging comments about work and the lives of casually encountered workmen. In their aimless wanderings, which punctuate their sexual activity, the pair retreat into a dream-like erotic zone or perhaps delirium.

Apparently it was this element of the relationship – isolation from external reality – that intrigued Jang. In his own published written introduction to the film he calls it “a story about the dream of living, eating and making love without having to work. Social orthodoxy has it that all of the world has the right to work and to lead a decent life and for this reason I find it most amusing to show a point of view to the contrary.” (2)

There are two elements to Jang’s storytelling that manage to lighten the load of Lies‘ descent into sexual violence. It has to be said that the adjustment to all this obvious pain is fairly easy. Jang draws on humour in the ever more imaginative sado-masochism that the characters are called upon to indulge. When one thinks the violence can go no further, it’s as if the director has read our mind and the roles of sadist and masochist are reversed. J becomes the willing victim and Y, after initial reluctance, the dispenser of beatings via birch, cane, log of wood and metal rod. The apparatus required by the relationship becomes more elaborate and the audience gasps when a suitcase full of implements to effect pain is disgorged of its contents. There is as well genuine tenderness between the two, complicity in a bizarre adventure that seems to be very natural. The actors have created in our mind at least some sense of real mutual affection. (3)

Inevitably the relationship founders but, maybe thanks to Jang’s ultimately sunny disposition, it does not entirely disappear into the doom, death and destruction that characterises those predecessor films I mentioned before. J resumes some sort of life with his wife and finally has to make the great admission about what the relationship with Y meant to him. There’s a simple tag line at the end that might just be the best close for a movie in some time. (See it and judge for yourself.)

I suppose it’s inevitable that the first Korean film to get a cinema release in Australia had to be one of sufficient notoriety, one that would guarantee an audience seeking titillation, sensation and perversion. No doubt, its explicit sexual display will be featured heavily in the advertising and the promotion. Then again, Lies is a film in which three-quarters of its time is taken up with explicit sexual display, even though some of its excesses are rendered with machine gun paced editing and strobe lighting. Those effects lessen the impact and remind us that the film is trying to present something “serious”. Jang is too smart to be the complete outlaw making a film which even the most broad-minded would find difficult to defend from the ravages of the conservatives who have regained control of the censorship apparatus in most parts of the world. His film, just like Oshima’s, has claims to be seen as art, requiring consideration of far more than its graphic sexual representation.

We are at a disadvantage of course for the window on Korean cinema is too small to comprehend all the matters that Jang would like us to understand. As well, Lies arrives as a film from the middle of a career stretching back over a dozen years. As a filmmaker, Jang has previously devoted a considerable part of his work to challenging the Korean establishment. Such challenges have been made in his various films about sexual relationships in society (Lies, Road to the Racetrack [1991] and To You From Me [1994]) or those which explore the politics of Korea and the religious basis for much of the national conservatism (such as A Petal [1996]). 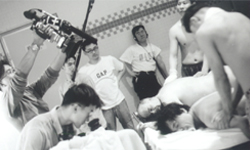 Much of this aspect of Jang’s life and work can be better understood after viewing Tony Rayns’ recent documentary on the director, The Jang-Sun-Woo Variations (2001). In twelve neat chapters, Rayns situates his subject in a series of iconic Korean establishments, most notably a bathhouse where both directors lay naked while they unburden themselves. This film exists, rather like those fish that live in the mouths of crocodiles, feeding directly of its subject and of interest entirely because of the controversial reputation garnered by Lies for Jang Sun-Woo. Using all the facility that digital video provides, Rayns’ film darts into a hundred undiscovered particles of Jang’s life and work. Multiplying the onscreen images to show Jang, his films, his collaborators and his country’s mindset, it provides a benchmark introduction to those who might be seeing Jang’s work for the first time and a reminder of its richness and diversity for those familiar with it. This is the model for films about directors – concise, complete, an invaluable, companion piece.

When Jang was offered Lies he initially refused the assignment. With To You From Me he had already done one notorious and explicit adaptation of a book by Jang Jung-il. He did not want to repeat himself and was interested in making “an animated feature or a cyber-action movie” (4) He was prevailed upon by the producer, Shin Chul, a man of quiet but steely resolve if his appearance in Rayns documentary is anything to go on. Having made it, however, Lies has served to cement a reputation for controversy that the director himself is reluctant to accept even while admitting that he somehow just seems to end up causing problems. If that however causes his reputation to expand into “western” cinemas then it is serving a useful purpose. Among all the reasons for seeing Lies is the possibility that it may provoke people both looking forward to new films and looking back on a very substantial body of work.