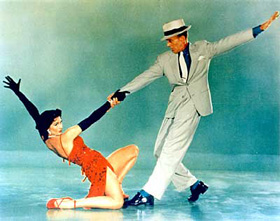 In Sight and Sound‘s 2002 poll of the ten best films ever made, one musical made the list: Stanley Donen and Gene Kelly’s Singin’ in the Rain (1952). Without denying that film’s considerable charm, a musical released a year later (which failed to receive a single vote in Sight and Sound‘s survey) may be worthier of similar hyperbolic citations: The Band Wagon. The films share several points of contact: both are backstage musicals built around songbook catalogues and produced for MGM by Arthur Freed; both have witty screenplays by Betty Comden and Adolph Green; and both feature important roles for Cyd Charisse. One may also see both films as primary examples of what André Bazin called the “genius” of the Hollywood system, in which great films are produced less through a single auteur than through a group of talented individuals working collectively with the sophisticated technical resources of a major studio while simultaneously drawing upon the rich traditions and forms of American popular culture.

Bazin’s approach goes a long way to unpacking Singin’ in the Rain. But it does not take us far enough with The Band Wagon. Repeat viewings of Singin’ in the Rain merely confirm its initial pleasures. Repeat viewings of The Band Wagon bring forth a work of an increasingly apparent formal, thematic and emotional richness which the Kelly/Donen film never approaches. While there are several ways of accounting for this difference in the two films, arguably the central one is the sensibility of The Band Wagon‘s director, Vincente Minnelli. Minnelli speaks through and within the great collective voice and industrial apparatus which sets this film (and all of his films) into motion, an authorial voice that paradoxically articulates its own distinction through a collaborative atmosphere. Minnelli is often condescendingly regarded as the ultimate example of the decorative metteur en scène. Certainly in his handling of color, camera movement, costuming, decor, and staging of action, he has few rivals in the Hollywood of this period. A recommended experiment: Try watching the “Shine on Your Shoes” number in The Band Wagon and force yourself not to watch Fred Astaire and LeRoy Daniels. Instead, only take note of the direction of the extras; watch it again, and only note the function of the decor and the camera movements; then watch it one final time putting all of these elements together. It is a very densely layered sequence, not only a brilliant Astaire number but a brilliant example of mise en scène.

What is overlooked in the description of Minnelli as nothing more than a metteur en scène is how often the films allow themselves to be read allegorically in relation to Minnelli’s own position as a ‘slave’ to the studio system. Like almost all musicals, The Band Wagon posits the collective as an ideal (with the formation of the couple as its privileged center), and like almost all backstage musicals that collective ideal ultimately becomes the successful show itself. But The Band Wagon considerably complicates the terms of this generic given. In the film we find a situation which recurs throughout Minnelli: Who will ultimately dominate and control the narrative world’s mise en scène? Typically this battle will have its origins in a character whose drives are so strong and self-involved that they threaten to unwittingly destroy the environment around them. In the case of The Band Wagon, this role is assumed by the show’s brilliant but egomaniacal director, Jeffrey Cordova (Jack Buchanan). His lack of familiarity with the popular cultural basis of the musical causes him to infuse his initial foray into the genre with an over-determined, Faustian interpretation of the show’s original ‘light and intimate’ libretto. With Cordova, the show’s decor becomes laborious and overscaled, threatening to obliterate its performers. While everyone connected with the show suffers as a result of Cordova, it is Astaire’s middle-aged Tony Hunter, attempting a stage comeback after being regarded as a Hollywood has-been, who has the most at stake in the enterprise. Hunter represents the other extreme of the Minnelli protagonist, the passive and isolated dreamer who has enormous difficulty in rousing himself into concrete action and movement.

Presiding over The Band Wagon (and directly cited by it) are two of the great master narratives of Western culture, those of Oedipus and Faust. The struggle of the child aesthete over the tyrannical power of the father (symbolic or literal) recurs throughout Minnelli but is never positioned with such comic explicitness as it is here. In our first view of Cordova he is starring in Oedipus Rex but will soon assume the role of the destructive father to Hunter as well as playing Mephistopheles to Hunter’s Faust, both off-stage and within the show itself. Hunter’s character within that show is a writer and illustrator of children’s books who leads a professional double life, making money writing violent detective stories. This duality dominates many of Minnelli’s protagonists, torn between seemingly irreconcilable drives and desires. (A cut production number for Charisse’s Gabrielle Gerard would have made this explicit: “Two-Faced Woman.”) But it also spills over into the tone of the films.

If it were necessary to choose one word that most strongly captured the emotional flavor of Minnelli’s films it would be ambivalence. The family comedies and musicals, in particular, are dominated by a sense of both comic acceptance of the world and of a melancholia which cannot be fully erased. (I once had a student who cried after a classroom screening of The Band Wagon, not from happiness and not from sadness but from unresolved emotions she was unable to explain.) Happiness, euphoria, utopia through song and dance, all of these elements so crucial to the musical are present in The Band Wagon but in a provisional way. This is acutely captured during the “I Love Louisa” number, which the entire cast happily performs at a party after the disastrous opening night of Cordova’s version of the show, cheering themselves up but only for the time it takes them to sing and dance. The moment the song is finished everyone goes into a depressed slump.

It is up to Hunter, as a rejuvenated Faust and as the symbolic son destroying his father, to take control away from Cordova, turning the show back into ‘entertainment.’ The film has been criticized for its anti-elitist, pro-popular culture position. But it is important to remember what the concept of entertainment signifies here. Hunter’s version of the show allows for a fluid form of theatricality in which off-stage conflicts become the on-stage raw material for a heightened, stylized form of play. The temporary nature of this is not a source of melancholia but of celebration since the theatrical play in these numbers is an implied contract that the performers have with each other. In Hunter’s show, Faust and Mephistopheles can sing and dance together in matching tuxedos and top hats and Oedipus, if thought of as the protagonist to the original detective story, can undergo a pop culture transformation in the film’s finale, “Girl Hunt Ballet” (the very title suggestive of both elite and popular culture). Here Hunter assumes the Mickey Spillaine-inspired role of Rod Riley, private dick, giving Hunter the phallic potency he so conspicuously lacks elsewhere. Hunter’s uncertainty about Gerard’s attraction to him assumes the form of her elusive dual role in this number as an ‘innocent’ blonde and a brunette vamp.

It is up to Gerard to make the film’s final important gesture, her speech in which she proclaims her love for Hunter on-stage in front of the entire company, at a surprise party for him after the show. In order for this to happen, though, she speaks through the collective voice of the company (“We’ve come to love you.”) and makes use of theatrical metaphors (“The show is going to run a long time. And as far as I’m concerned, it’s going to run forever.”) This language is clearly understood by both Hunter and the film spectator as a dramatic declaration of love expressing Gerard’s feelings more profoundly than a direct statement ever could. In the final shot of the film, the cast sings directly into the camera, “This goodbye/Brings a tear to the eye/The world is a stage/The stage is a world of entertainment,” not only capturing the resolution’s feeling of elation with a touch of the bittersweet but also framing this resolution within the realm of the theatrical which, for Minnelli, always assumes the most privileged form of being.