Lubitsch shows you first the king on the throne, then as he is in the bedroom. I show you the king in the bedroom so you’ll you know just what he is when you see him on his throne. (1)

Erich von Stroheim’s seemingly straightforward account of the difference between his films and those of Ernst Lubitsch tells us much about what is peculiar and remarkable in his work. The essence of thisdifference is less a question of sequential order than an outcome of a remarkable attention to the psychological and physical realities of characters anchored within their environments. His work is full of scenes in which characters take time to inhabit a particular space or situation. Thus, the much commented upon realism of Stroheim’s films often comes down to both the attention that is paid to details of mise en scéne as well as the time his films take to lead up to what would, in most other films, be the primary point of focus. Stroheim’s films have a tendency to keep things up in the air, to stretch moments of time to breaking points of dissolution and entropy (within the context of Hollywood narrative cinema). As Gilles Deleuze has noted:

We might say of Stroheim what Thibaudet said of Flaubert: for him, duration is less that which forms itself (se fait) than that which undoes itself (se défait), and accelerates in undoing itself. It is therefore inseparable from an entropy, a degradation. (2) 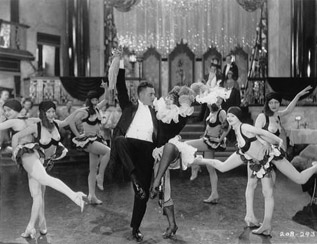 A comparison between Lubitsch’s sparkling, all-singing and all-talking 1934 version of Franz Lehar’s operetta and Stroheim’s baroque vision of what is mostly its ‘back-story,’ tells us much about the director’s approach to exposition, character and the cinematic representation of time and space. Whereas Lubitsch’s film commences with the title character as already a widow, and initially not so ‘merry,’ it is not until about two-thirds of the way into Stroheim’s version that her degenerate, foot-fetishist husband drops dead (quite literally on merely kissing her shoulder). Not unlike the way in which Scorsese expands the moments of encounter which usher in New York, New York (1977) – to the point where we think they may never end – Stroheim’s The Merry Widow takes considerable time and care to introduce its central characters, and this is largely where its realism or naturalism lies. This process of introduction, elongation and elaboration grants Stroheim’s films a curious tonality. Following in many respects the work of D. W. Griffith – with whom Stroheim worked – Stroheim’s films are populated with caricatures, typologies and conventionally exaggerated or melodramatic modes of performance. Like Griffith, Stroheim’s films are often memorable for the ways in which they isolate faces, expressions and parts of bodies, with the grimace, wild laugh or piercing stare (a John Gilbert specialty) of a character often standing in for a more complex range of emotions and psychological insights.

Almost in contrast to this, Stroheim’s films also present an incredibly strong and nuanced vision of the physicality of characters and the ways in which they interact with each other and their environments (thus the development of character through time and space becomes a key). Though more static in this regard than many of Stroheim’s other films, this characteristic is evidenced by the many scenes in The Merry Widow which focus on the intimate physical interactions of characters, as well as the varied ways in which these characters view and sum each other up. The most famous instance of this occurs during Sally’s (Mae Murray) initial stage performance, watched by her three potential suitors in the audience. Each of these three characters isolates an aspect of Sally’s body, providing a direct correlative for the ways in which the film fixates and hones in on the physicality of characters and their environments (Stroheim’s characters and their emotions are seldom as rarefied as those found in Lubitsch or Borzage). This scene also places a considerable value and emphasis on the object and intention of this gaze: Sally’s short-lived husband, Baron Sadoja (Tully Marshall), can do nothing but focus on her feet; the Crown Prince (Roy D’Arcy) drools over her torso; while the nevertheless still sexually aggressive Prince Danilo (John Gilbert) is transfixed by the luminosity of her face (his baseness seemingly having higher aspirations). Thus the film presents a not surprising hierarchy of vision and spatiality which is reiterated in the plot’s movement of Sally (physically but not emotionally) from Baron to Crown Prince to Danilo. This scene also highlights one of the recurrent visual devices of the film. At various points, Stroheim takes pains to isolate an element within this frame, often moving from mid-shot to expressive close-up. This emphasis on an isolated element takes various forms: the incessant, isolated motion of the petite stamping feet of the heroine; irises or partly blacked-out frames which hone in on pertinent details; dimmed rim-lighting which is matched against the glowing jewels of the heroine (which seem to have their own internal light source). In this regard, Stroheim’s cinema seems to be formed through a chain of detailed observations, expressive movements and visually isolated vignettes.

This scene also highlights the technical command and control displayed in Stroheim’s cinema. The Merry Widow constantly juxtaposes densely and sparsely populated and composed images, with the dexterous deployment of such devices as irises, fades and dissolves. Nevertheless, the most remarkable compositional element of the film is its highly expressive framing. Although The Merry Widow seems to be very much a film of its time (on the cusp of the refined sophistication of much late American silent cinema), some of its compositions, as well as aspects of its exposition, seem more characteristic of earlier silent cinema. This is particularly true of many of the compositions in depth which, rather than cutting between characters, show an action and reaction in the same shot. A good example of this is the scene between the Crown Prince and Prince Danilo in Sally’s dressing room. Danilo watches the Crown Prince unobserved, while we watch their choreographed movements expertly staged within the frame. Although Stroheim’s films are not conventionally theatrical – they are more literary in their attention to narrative detail and plotting – they do betray some of these ‘origins’ or ‘borrowings’ in their staging (while also linking to a tradition of deep space or explicitly temporal cinema). As Jean Mitry suggests: “Instead of a theatrical (in the dramatic sense) cinema, Stroheim created an art of narrative and a realism of duration and overturned all the popular tenets of the time.” (3)

Stroheim’s somewhat ‘willful’ silent version of The Merry Widow may seem, at first, a less than obvious place to situate the essence of the director’s cinema. Stroheim himself often dismissed the film as his most conservative and chaste work, positioning it as a kind of penance or offering to MGM and Irving Thalberg after the monumental disaster of Greed (1924). In this respect, the director often singled out for ridicule the risible posturings of his two stars, John Gilbert and Mae Murray, while favouring the more structurally peripheral but dynamic, excessive and physical incarnations played by Tully Marshall and Roy D’Arcy. Stroheim’s fixation on themes and elements outside of Lehar’s operetta and Lubitsch’s film, is foregrounded by the film’s rather spasmodic narrative structure. In Greed, Stroheim had purportedly set out to translate to film the entirety of Frank Norris’ source novel (helping to account for its original 42 reel size). Stroheim’s attitude to the filming of Lehar’s operetta is considerably different. Obviously the translation of Norris’ florid novel to silent cinema led to a degree of transformation, but Stroheim’s care and respect for the source material of Greed is not shared by his vision of The Merry Widow. This is indicated most obviously by the fact that Stroheim’s film lacks music (although it does have a rhythm, develops a complex pattern of motifs, and was premiered with full orchestral accompaniment and score), but also by the emphasis it places on events and emotions that precede or ‘surround’ the basic story. This infidelity is also evidenced by the varied and inconsistent tone of the film. The Merry Widow lurches wildly from farce and black comedy to moments of real drama (such shifts in tone are characteristic of Stroheim’s work). For example, the penultimate duel between the Crown Prince and Prince Danilo has a moody, chilly, almost Atget-like ambience (reminiscent of his photographs of deserted early morning Paris). In this sequence, the pomp and energy of the film bleeds out, leaving a collection of starkly composed frames and compositions (projecting a starker world in which the death of Danilo seems a real possibility).

Jonathan Rosenbaum has argued that there is often a problem with writing on Stroheim, most of which focuses on either the legend of the director (and thus the persona of Stroheim in relation to the ‘symptoms’ of the work) or the limitations of what actually appears on the screen. (4) Seldom is enough attention paid to what actually ended up in the films, or the particular stylistic or thematic preoccupations of the director’s work (beyond certain generalised inaccuracies relating to the lack of camera movement in his films, the density of compositions, the movement from mid-shot to close-up, from context to detail, etc.). Thus, discussion of Stroheim’s work is largely supplemental in nature, fixating upon the hours of lost footage and unrealised projects that mark his ‘magnificent’ but curtailed career. This discussion often also examines the tensions which occurred on and off set. In this respect, The Merry Widow is a less ‘auspicious’ work. Various scenes were cut – particularly those involving the already extended activities of the salacious garrison in the opening section – and certain legends do surround the film’s production (involving Stroheim’s working relationship with Murray and his battles with Thalberg), but generally this appears to have been a less troubled production.

The Merry Widow was Stroheim’s most commercially successful work. This success probably counts against the film if one constructs an heroic narrative of Stroheim’s career that pits the uncompromising genius of the director against the production-line hegemony of the Hollywood system. Nevertheless, it is not accurate to simply regard Stroheim as an overly artistic victim of the Hollywood studios. It was this system that allowed him to embark on such excessive and ambitious projects as Foolish Wives (1922), Greed and The Wedding March (1928), even if the end results were damaged and curtailed by commercial realities (and a lack of sensitivity to the obsessive vision of Stroheim). Stroheim’s notorious budgetary indiscretions, dictatorial direction, and seemingly absurd attention to realistic detail (though his realism or naturalism was often more perceivable on-set than directly by the audience), were equally used as ways of promoting the films he made. For example, a neon sign at the studio announced the spiraling budget during the production of Foolish Wives. This legend formed a grid through which audiences of the time saw his films. Stroheim’s status as “The Man You Love to Hate,” largely earned by his performances as Prussian officers in a range of WWI-themed films, also carried over to his career as a director. The Merry Widow, despite its fixation upon the infirmities and obsessions of its surrounding characters, is probably Stroheim’s most joyful and genuinely energetic work. Although in later years Stroheim often dismissed the film as largely a studio concoction, it bears all the hallmarks of a film “personally directed by Erich von Stroheim.” (5)