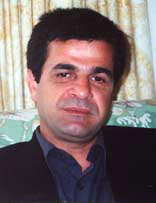 The National Board of Review of Motion Pictures

As the winner of the Freedom of Expression Award for my film, The Circle, I would like to take your kind attention to what happened to me in your country, an event which takes place everyday in the U.S. And let me hope to see your reaction to these inhuman events. I believe, I am entitled to be curious about the response of the Board who granted me such an Award, a response in proportionate to the behavior I and many other people faced and will face. You have considered my movie a wonderful film and I wish your Board and the US media would dare to condemn the savage acts of American police/Immigration officers and that such condemnation would make the people aware of these acts. Otherwise, what would winning such an Award mean for me? And what honor would I have to keep it? Then, I may return this Award to you as you may find another figure who is more in proportionate to freedom!

In the booklet you kindly sent me together with your Award, I read that prestigious film personality Orson Wells had also previously received this Award. Should I be happy that this great man is not among us now to hear how the American police behave toward the filmmakers or people who enter your country? As a filmmaker obsessed with social issues, my films deal with social problems and limits and naturally I cannot be indifferent to racist, violent, insulting and inhuman acts in any place in the world. However, I certainly do detach the acts of American police and politicians from the cultural institutions and figures as well as the great people of USA, as I was informed my film was very well received by the film critics and audiences in your country. Nevertheless, I will inform the world media about my unpleasant experience in New York and I hope, your Board, who strives in freedom of expression, would react properly in this respect.

On April 15, I left Hong Kong Film Festival to go to the Montevideo and Buenos Aires Festivals through United Airlines’s flight 820. This 30-hour trip was via New York’s JFK airport and I had to stay there for two hours and change my flight to Montevideo. Further to my requests, the staff of all the said Festivals had already checked if a transit visa is required and they assured me there is no need for such visa and moreover, the airliner issued me the ticket visa NY. But, I myself did ask the United Airlines staff for the need to have a transit visa at Hong Kong airport and I heard the same response. As soon as I arrived at JFK airport, the American police took me to an office and they asked for fingerprinting and photography because of my nationality. I refused to do it and I showed them my invitations to the Festivals. They threatened to put me in jail if I would not do the fingerprinting. I asked for an interpreter and to make a phone call. They refused. Then, they chained me like the medieval prisoners and put me in a police patrol and took me to another part of the airport. There were many people, women and men from different countries. They passed me to the new policemen. They chained my feet and locked my chain to the others, all locked to a very dirty bench. For 10 hours, no questions and answers, I was forced to sit on that bench, pressed to the others. I could not move I was suffering from an old illness, however, nobody noticed. Again, I requested them to let me call someone in New York, but they refused. They not only ignored my request but also to a boy from Sri Lanka who wanted to call his mom. Everybody was moved by the crying of the boy, people from Mexico, Peru, Eastern Europe, India, Pakistan, Bangladesh and … I was thinking that any country has its own law but I just could not understand those inhuman acts.

At last, I saw the next morning. Another policeman came to me and said that they have to take my photograph. I said never. And I showed them my personal photos. They said no and they have to take my photo (in the way, the criminals are taken) and do the fingerprinting I refused. An hour later, two other guys came to me and threatened me to do the fingerprinting and photography by computer and again I refused and I asked for a phone. At last, they accepted and I could call Dr. Jamsheed Akrami, the Iranian film professor at Columbia University and I explained to him the whole story. I requested him to convince them and as he knows me well, I am not a guy to do what they were looking for.

Two hours later, a policeman came to me and took my personal photo. They chained me again and took me to a plane, a plane that was going back to Hong Kong.

In the plane and from my window, I could see New York. I knew my film, The Circle, was released there for two days and I was told the film was very well received too. However, the audiences would understand my film better if they could know that the director of the film was chained at the same time. They would accept my beliefs that the circles of human limits do exist in any part of this world but with different ratios. I saw the Statue of Liberty in the waters and I unconsciously smiled. I tried to draw the curtain and there were scars of the chain on my hand. I could not stand the other travelers gazing at me and I just wanted to stand up and cry that I’m not a thief! I’m not a murderer! I’m not a drug dealer! I…I am just an Iranian, a filmmaker. But how I could tell this, what language? In Chinese, Japanese or to the mother tongues of those people from Mexico, Peru, Russia, India, Pakistan, Bangladesh … or in the language of that young boy from Sri Lanka? Really in what language?

I had not slept for 16 hours and I had to spend another 15 hours on my way back to Hong Kong. It was just a torture among all these watching eyes. I closed my eyes and tried to sleep. But I could not. I could just see the images of those sleepless women and men who were still chained.