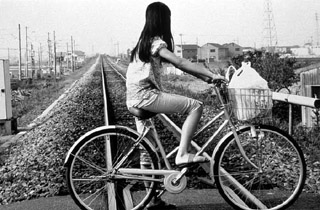 “A tidal wave is coming. It will sweep us away.” These are the words, spoken in voice-over, which accompany the very first image of Shinji Aoyama’s Eureka (2000)-a curious way to launch a film whose remaining three hours and thirty-seven minutes will play out largely in silence and almost entirely without dramatic incident. It’s not a bluff-Eureka is very much about a kind of tidal wave, but instead of concentrating on the crash of the wave, it devotes itself to its aftermath, to the apparent quiet and calm that it leaves in its wake. The movie has a strange, otherworldly quality to it, and so it’s a strange, otherworldly tidal wave-one that emerges from a rolling, rocking sea but leaves behind it an ominously still, glassy lake. Eureka devotes its long running time to plumbing the depths of this emotional stillness, this shocked paralysis.

The tidal wave comes in the form of a hijacking of a rural bus, leaving only three survivors-Kozue and her brother Naoki (Aoi and Masaru Miyazaki), on their way to school, and Makoto (Koji Yakusho), the driver of the bus. Most of Eureka takes place two years after the catastrophe, when Makoto, having wandered aimlessly since the hijacking, returns to town and eventually moves into the house the now orphaned children inhabit. Kozue and Naoki have cut themselves off from the world, drawing their isolated, self-sufficient existence tightly around them, taking refuge in the emotional fortress they’ve constructed together. They do not speak to others and communicate with each other by means of a kind of telepathy (occasionally audible to us in voice-over). Makoto is much older and so his response is very different. He’s a gentle, kind, reflective soul, and there’s nothing antagonistic about his relationship to others. But in a subtler way, he has withdrawn from society as well. He’s functional and even friendly-he finds a job as a construction worker and begins to form a relationship with a young woman-but he’s clearly uncomfortable with people and unwilling to let anyone in. His own emotional fortress is not nearly as imposing or forbidding as Kozue and Naoki’s-they’ve retreated entirely within theirs, while his encloses and protects only the innermost part of him, but it exists nonetheless.

Soon after his return, Makoto moves in with the children. His reasons for doing so, which are multiple, are never spelled out but they’re heartbreakingly clear. It is only with these children, the only people on earth who he can understand and from whom he can hope for understanding, that he feels comfortable-like a highly developed autistic person, he can play at normal social behavior, but in fact all other people are like aliens to him. In almost every scene in which someone tries to reach him emotionally, all he can say, again and again, is “Sorry.” It becomes like a mantra. It’s a defense mechanism to be sure, and it frustrates everyone he comes in contact with, however it’s anything but insincere-he’s deeply, unspeakably sorry. Far from hostile, it’s almost a generous, self-sacrificial, gesture-he knows that others can’t possibly understand how he feels and so he tries to shield them from his feelings, to keep from exposing the distance between them.

His only possible society is in the house with Kozue and Naoki; although the children don’t speak to him, they accept him. But as much as he’s there to share their existence, to find comfort in their understanding, he comes equally as a protector, as a parent-figure. He’s a selfless, generous guardian, but in a way he satisfies an even greater need by helping them than by letting them help him. In protecting them he’s found a calling, a purpose to life, a life which the hijacking robbed of all meaning. He helps put their existence in order and eventually decides that that existence, as comforting as it is, has become stagnant and paralyzing, that it is more of an obstacle to their emotional healing than an encouragement. So he buys a bus, shuts the house, and takes them on the road.

There’s a pretty conventional, dramatic film lurking in the background of Eureka-a story of tragedy, trauma, and eventual reawakening to life. But Eureka is not this film, because Aoyama is too devoted to his characters to tie them to a narrative and let them get dragged along. There’s a lot to admire about the movie-its visual majesty (it’s filmed in beautiful black and white cinemascope), the sensitivity of the performances, the maturity of Aoyama’s vision. What’s most remarkable about it though is its static quality, the core of stillness at its center. Things happen in Eureka-most importantly, there’s the appearance of a fourth character, the children’s cousin, Akihiko (Yohichiroh Saitoh), sent by their relatives to look after them, who appears about halfway through, and a series of murders in the town which the chief detective believes that Makoto has committed-but they impart almost no quality of forward motion to the film. It’s as if they’re swirling above and beyond the heart of the movie without ever really coming into contact with it.

It’s clear that the trauma Makoto and the children have experienced has opened a great chasm between them and everyone else-it’s as if they inhabit a different world than their neighbors and friends and even their family, and Aoyama’s accomplishment is to enter into their world and make the movie from within it. The three of them are in shock-their house is a sort of cocoon they’ve spun around themselves for protection-and rather than trying to dramatize their emotional state, the film absorbs it. Long stretches of Eureka pass with little or no action or dialogue; shots are held much longer than we’re used to; few scenes are backed by any music; the camera moves slowly and methodically if at all. Eureka risks boring us almost constantly, but it never does because Aoyama’s patience and devotion to his characters makes them seem so real to us and their experience so much our own-we’re not listening to a story, we’re experiencing one, so there’s no question of our losing interest. In one beautiful moment, almost immediately following the hijacking, Makoto sits alone in a room in his house at night, staring out the window, and turns the lamp on and off, again and again, alternately conjuring the outside world into existence and obliterating it. It’s an inexplicable scene but one that conveys his shock and his suffering so much more vividly and convincingly than any speech or conventionally plotted scene would. Eureka is slow but it has to be slow. It’s as if the film, in sympathy with its characters, were too fragile to bestir itself into any kind of narrative motion-it has spun its own cocoon to protect itself from storytelling conventions.

It’s not until Makoto buys the bus and induces Kozue and Naoki and Akihiko to venture out of the house and onto the road that Eureka seems to stir from its motionlessness. This is the one decisive moment, the one plot-twist, the sign that Makoto and, with his help, the children are ready to take steps towards reentering the wider world. It’s not that simple really-in a way their trip is paradoxical. They’ve roused themselves from their static existence, but if anything they’re more cut off from the world in the bus than they were in the house. They may have traded in a fixed cocoon for a traveling one, but in the town Makoto, at least, interacted with other people; on the road their isolation is often complete. But the trade-off feels right. Makoto knows that the children have to venture out of their fortress before they can hope to begin the healing process, but he knows too how delicate a process it is-that rushing them would drive them even further into retreat. Once on the road, the movie becomes, if anything, even quieter, even stiller. Thinking back on Eureka, what comes back most vividly for me is an extended scene on a hillside rising from the road where they’ve parked the bus to rest. For some time, the four of them sit, together but spaced evenly apart, on the hill, looking out silently over the countryside, and Aoyama effortlessly communicates the comfort and peace they feel simply being together. The scene goes on and on as they eat, stroll, nap. Eventually Makoto comes across Naoki sitting in the driver’s seat of the bus, playing at driving. Wordlessly, gently, Makoto gestures to him to turn the ignition, to put the car into gear, to take off the brake, to accelerate; wordlessly, and with a heartbreaking delicacy, he begins teaching Naoki to drive, and you can almost see Naoki’s innermost self shaking the dust off itself and beginning to stir from its slumber. It ends ominously-Makoto has forgotten that they’ve rigged a clothesline to the bus, and he has to yell at Naoki to brake. But it’s a profoundly moving scene, and all the more so for playing out in silence.

Eureka has its flaws: both the murder investigation of Makoto and the presence of the cousin feel like dramatic devices more than organic parts of the film; Aoyama’s minimalism seems forced at the beginning; and when he switches to color for the final shot, it doesn’t quite work-it dissipates rather than intensifying the power the film has built up. But the urgency of Aoyama’s devotion to his characters overwhelms all these little faults; the depth and honesty of his understanding are what really count. Eureka is a film about emotional healing, about emerging from a state of shock, but Aoyama has the maturity to acknowledge that this process is an excruciatingly slow, almost imperceptible one and that it will never be complete. In a way the characters are in more pain at the end of the film; for Naoki especially, the ending is as tragic as it is hopeful. But there is hope in their suffering because if they are feeling pain they are at least feeling again-having just emerged from their paralysis, their limbs are stiff and cramped from lack of use, but the pain is a sign of life. And so it is with the film itself-Eureka may be a difficult, painful movie, but it becomes a part of us in a way that a more superficial, emotionally extravagant one could not, and encourages us to flex emotional muscles that usually go unexercised. Other movies may leave us happier but Eureka is not likely to leave us at all.