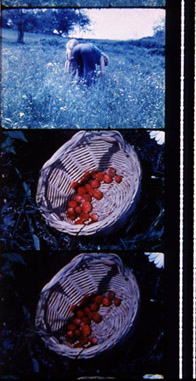 This article was originally published under the title, “Seconds of Ecstacy”, in the Chicago Reader, January 17, 1986. © Fred Camper, 1986.

For a Jonas Mekas film and videography, please click here.

The great achievement of American avant-garde film has been the interiorization of the cinema image: the creation of a body of films whose techniques are geared not toward using the film image for objective presentation of external events but for the exploration of the varieties of the private personas and inner visions of their makers. Jonas Mekas’s film, He Stands in a Desert Counting the Seconds of His Life, is one of the most intense, beautiful, and moving examples of that tradition.

Jonas Mekas is perhaps best known as a major advocate of American avant-garde film. Through reviews and exhibition activities over several decades, he brought the achievements of this extraordinary filmmaking movement to many who would not have encountered it otherwise. But he is also a filmmaker himself, and is in fact one of the finest artists in the movement he championed.

While we do see Mekas himself and his family, the film’s focus is on many other, often more public figures. There are a number of “celebrities,” from John and Yoko to Andy Warhol to Jackie O. and various Kennedy children. There is also much footage of persons well known to followers of independent film: Peter Kubelka, Hollis Frampton, Ken Jacobs, P. Adams Sitney, Richard Foreman. There are also many other Mekas friends who are not well known.

For the past 25 years, Mekas has been releasing a series of diary films, each dealing with different periods of his life, which together will constitute a single, massive cinema autobiography. He Stands in a Desert is the first of three films utilizing footage shot over the last 15 years; Mekas sees this film as the one most concerned with material outside his personal life.

Mekas, however, treats Jackie O. and John and Yoko no differently from anyone else in his film. He does not distinguish who is a celebrity from who is not. He does not stress the materially obvious, the external; we see little of Jackie’s apartment; there are few moments of strong interpersonal drama. Our awareness is instead focused on the filmmaker as autobiographer, on the particular view that Mekas has of each of these people. Mekas is true to the ideology of his movement in stressing his characters’ presence as areas of light; in the relative “abstractness” of his filming compared, say, to a conventional documentary, he envisions each person as a pattern of moving shadows that burns itself into the spectator’s retina and brain, impinging actively on the viewer’s consciousness in the way that any encounter with another can change you. We learn little of how Joho and Yoko or Richard Foreman may have specifically affected Mekas, in terms of their worldviews, and everything about how, on a deeper and more elemental level, any person other than the self cuts into your field of view, and mind. Mekas stresses this aspect of living with others through a filming method that causes the viewer to perceive each scene in an active, ever-changing way, as “an adventure in perception,” to quote the filmmaker Stan Brakhage. Indeed, Mekas’s film makes commercial documentary and more conventional autobiographies seem wanting in the way the imagery they offer seems so static and predetermined.

Mekas’s cinematic style involves improvisational, in-camera composition. He will respond to the scene before him by filming very short bursts of imagery; frequently of aspects of the scene that might not normally be emphasized. These are then combined in-camera, and, with some later editing, constitute his own unique, idiosyncratic vision of the event filmed. Viewers unfamiliar with avant-garde film should be prepared for the possibility that this work may seem difficult to watch at first: not only is the editing very rapid, but it may be disconcertingly abrupt. Mekas will cut away from a scene just as an “interesting” event seems about to occur or just at the point when the viewer has begun to develop some empathy for the characters. This editing is very jagged and irregular in its rhythms. One can never predict when Mekas will end a shot, except perhaps by guessing where the most unlikely moment to do so might be. For the viewer, the eye is constantly being jarred by the briefness of the imagery, and as well by the “home movie” filming style. Mekas avoids classically balanced compositions, smooth, even lighting, or anything that might smack of the kind of pretty, unchallenging and unchanging, objectified and pre-digested-for-your-consumption imagery of the commercial cinema. The inspiration provided by the home-movie genre should not be overlooked here. Mekas revels in off-center framing, characters mugging for his lens, unsteady camera movements. He even makes brilliant use of various camera malfunctions, working them into his film’s rhythm. His poet’s eye manages, through his organization of his material, to cause these devices to heighten the intensity with which the scene is perceived. This is a film that lives in its many instants of surprise.

The effect on the viewer who is open to such possibilities is extraordinary. No scene, no moment can be perceived passively. Each of the sudden cuts tends, partly through unexpectedness, to burn the images he edits between into the brain with the flash of a sudden revelation. The passive perception of the overly determined imagery of the conventional modes of film is wiped out, and one’s mind is given a new life. Indeed, a film as great as He Stands in a Desert helps to impart new meanings to phrases like “living in the world.” Mekas argues that to live is to be continually, newly aware, to be forever open, to be able to continually surprise oneself.

Mekas’s avoidance of the obvious, of the already seen modes of cinema can also be seen in his overall structuring of his film. Different persons, various locations in the U.S. and Europe, and moments in time that are years apart are intercut with no obvious or easily predictable scheme. Mekas’s polemic, as a critic, has been in favor of the idiosyncratic, personal vision, and his own films constitute perhaps his strongest argument. 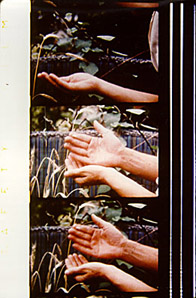 Another effect of Mekas’s technique is to emphasize, despite the recognizable characters and locales, the film as an autobiography. This is not a film that pretends to reveal any objective information about those it portrays. While printed intertitles label the material with locations, dates, and character names, their effect is, through dating the scenes, to locate them as “seconds” of the filmmaker’s life. As with any autobiography, the contents here are Mekas’s personal memories. The sound track has a similar double function. Occasionally, the filmmaker will be heard commenting on the material in voice-over. His location-recorded sound is not strictly synchronous; an orchestra of young people is accompanied by sounds of their performance, but the movements of the violin bows and the musical phrases do not match. In addition to location sound, music whose mood, rhythm, and words seem appropriate, in rather obvious ways, to the scenes is often added. All of this might seem crude and amateurish, if it weren’t for the fact that the sound also serves, in a manner similar to that of the titles, a second function: it distances the scene from the present, locates it in the filmmaker’s memory, and thus provides an added level of intensity. The consistency with which the music seems simply ironic serves to locate the visual scene not at the time of its filming, of its depicted events, but in the filmmaker’s editing room, as he reviews his footage and considers further commentary. In all aspects of his film, Mekas’s primary movement is inward, toward a personalized view of all seen, toward the exclusion of the impersonally objective. He seeks a unity that can never be found in an external world filled with the chaos of conflicting personas and modes of living, but that can only be re-created, through solitary quest, in the soul of the artist.

He Stands in a Desert Counting the Seconds of His Life is both a simply happy and a profoundly ecstatic film. There is an undercurrent of domestic tranquility, of people who are at home with each other. Even when the subject matter is anger, both Mekas’s characters and his camera tend to walk away from any violent confrontation between people. The film’s violence is reserved for the camera and editing, a “violence” that serves to intensify and heighten what is shown, partly as a result, of course, of what is left out.

We learn little of the stories or the histories of anyone we see, and yet sense that we are apprehending an entire, though not fully comprehensible, world in the tiny movement of a hand, the turn of the head, a flash of light. In Mekas’s filming and editing style he has found a beautiful equivalent for the simultaneous mental processes of active, vigorous living and the inner reflections of memory.

The film begins with the title “He stands in a desert counting the seconds of his life”; it ends with the title repeated in the past tense: “He stood in the desert..” This is in effect a double past tense, achievable only at the film’s end: the filmmaker remembering himself remembering the past. For a film of memories, He Stands in a Desert is amazingly devoid of easy sentimentality, perhaps because Mekas has chosen to remember his past not in the long years recalled by an aching, ill-defined nostalgia but in the intense seconds of ecstasy.

On the sound track of an earlier diary film, Paradise Not yet Regained (1980), Mekas told a wonderful, personal parable, his own version of the story of Adam and Eve. After they were driven out of Eden, while the pair rested in the deep shadow of a rock, Eve looked back and saw the glow of paradise exploding into little fragments. The pieces fell to earth in a heavy rain, covering the ground and the sleeping Adam. Eve never told Adam of this. For the filmmaker, paradise still exists, in those fragments scattered all over the world. Mekas himself emigrated to the U.S. from Lithuania after World War II and some time in displaced persons’ camp, and in all his work he has retained some of the identity of a “displaced person.” The idyllic unities of childhood, or of some real or imagined past social order in which work, culture and family life existed as an integrated and interrelated whole, are not possible in our era, wrenched as it is by war, tragedy, and the continual changes in technology that account, in part, for the ever-quickening pace of life. But a paradise can be constructed, via the making of art, or via the processes of imaginative seeing and memory, in the mind of each of us, each in our own way, within our desert, if not out of the grand arcs of our lives then out of our instants, our “seconds” of time. Such a paradise cannot exist as a continuous physical landscape, Eden having been lost.

The 19th-century American landscape painters such as Frederic Church and Albert Bierstadt could still envision the possibility of a physical Eden in the American wilderness even while depicting the steady encroachment of man. The space of our own age is broken, discontinuous, man-made, and, as such, a product of the human mind. Mekas, and in differing ways many of his filmmaker-colleagues, have given new life to the Edenic theme in American art by finding a vision of Eden appropriate to our ever-new environment.