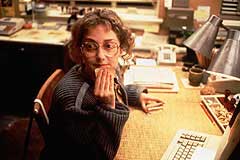 Office Killer, by first-time director and photographer Cindy Sherman, impresses more than perhaps it should, thanks mostly to its ingenious blend of high power dramatics, macabre humor, and a new twist or two on a time-worn formula. What compensates for the basic amateurishness of this movie is a brilliant performance by Carol Kane as the deranged Dorine Douglas and several harrowingly suspenseful murder sequences that leave audiences grabbing for their seats. Add an atypical ending, avoiding the easy cliché of the tagged-on-moral-to-the-story, and you have the characteristics of a fresh outlook on the much-exploited slasher/thriller genre, familiar to audiences since Hitchcock’s days, but this time with a woman performing the killings. The comic touches add a dimension of irony and paradox to the revolting sights of random slaughter and decomposing bodies, intensifying an awareness of madness loosened upon innocent bystanders.

Setting up a group of people of the most uninteresting kind – office workers – at first the plot seems bland and commonplace. Dorine, an innocuous-looking young woman with owlish eyes hiding behind thick glasses and wearing outdated dresses, gives the impression of both innocence and ineptitude, especially of the kind that results from being trampled under. The weekly magazine she works for is currently downsizing, meaning Dorine from now on will have to do part of her work at home, on a laptop computer she barely knows how to handle. The only denizens of her furniture-bare apartment are a grouchy invalid mother and a mouse-hunting cat, both diabolical. Dorine is seen dropping a dead mouse down a garbage disposer. She pronounces her words as a robot first learning to speak English would, elongating the vowels and crisply spitting out the consonants. She is the joke at the office, considered no less than retarded, useful but disposable, barely a female and only borderline human. Her co-workers, elegant women with boyfriends, tempers, and super-charged ambitions, include Norah Reed (Jeanne Trippleton), Kim Poole (Molly Ringwald), and Vriginia Wingate (Barbara Sukowa), whose asthma condition compels her to constantly breathe into a tube. In this competitive woman’s world, the last will become first, and it is Dorine, the one trampled under, who will eventually dominate.

Dorine’s metamorphosis occurs without warning, with the suddenness of an eruption. One night at the office, she is called upon to do late work, her computer breaks down and she asks the help of a co-worker, Gary Michaels (David Thornton), who is electrocuted while trying to fix the wires. Dorine dials 911, but hangs up when the call is answered. She places the corpse on a cart, rolls it down to her car, loads it in her trunk, and takes it home, placing it in her furnished basement (we don’t see the body until later). Then, seemingly without reason, she goes into a murder spree. She kills Virginia by poisoning her inhaler tube, taking the second corpse to her basement, placing it on a sofa, next to Gary’s. Then comes the turn of two young girl scouts who arrive at her door to sell cookies. The young girls join the other corpses in the basement, Dorine seen eating the cookies with relish while working on her new laptop. Intriguingly, she sends messages from Gary to the remaining office workers, implying he is alive and has left the office or his wife. There are three more murders before the movie ends, all planned with cool design and seeming absence of malice. The last scene shows Dorine, after her mother’s death, setting fire to her basement, then, sporting a blond wig, driving away in her car, circling a newspaper ad with her pencil for an office job, a look of triumph in her face.

The movie does not analyze Dorine directly but it gets a bit heavy-handed when it tries to establish cause and effect by showing flashbacks of Dorine’s relationship to her parents, especially her father, a domineering tyrant and child molester. Dorine had murdered her father, pulling at his hand while he was driving and trying to fondle her knee. Her mother was paralyzed because of that incident. These scenes, which show a young vindictive, intelligent, and vicious Dorine (Rachel Aviva), connect poorly with the overall flow of the story – seeming intrusions rather than explanations of insanity. That Dorine is mad is evident in her hallucinatory visions of corpses-of those she murdered-come to life and perform a macabre dance in her furnished basement, her necrophiliac’s paradise. Her murders are not motivated by revenge-for why would she kill the girl scouts? They are rather the necessary conditions for a new state of being for Dorine, of a life with the dead, who provide a companionship unmolested by pettiness and frustration. With this film, Cindy Sherman heralds a promising career, offering a feat of imagination practically unheard of since the days of Robert Browning (“Porphyria’s Lover”) and Edgar Allan Poe (“Lygeia”), two nineteenth century writers who understood intuitively the inner workings of a mad mind.