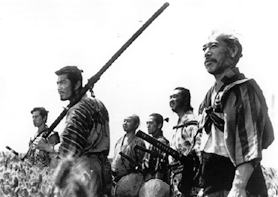 Winner of the 1954 Venice Film Festival’s Silver Lion and nominated in subsequent years for 2 Oscars-Best Art Direction/Set Decoration (Takashi Matsuyama) and Best Costume Design (Kôhei Ezaki)-as well as for 2 British Academy of Film and Television Awards-Best Film and Best Foreign Actor (2 nominations, Toshiro Mifune and Takeshi Shimura)-Seven Samurai is widely acknowledged as one of Kurosawa’s, and indeed Japan’s and World cinema’s, greatest films. Kurosawa directed and edited the film and also worked on the script with long-time collaborators Shinobu Hashimoto and Hideo Oguni. As with so many of his projects, his involvement in Seven Samurai was extensive and indicates his powerful commitment to exploration of the issues the film broaches and to achieving the widest possible audience for that exploration. Kurosawa’s recipe for this task was to make an action film that engaged the emotions and the intellect in equal and extraordinary measures.

Seven Samurai is a story about a poor farming village community in the sixteenth century Sengoku jidai era of civil strife and feuding samurai clans. Without the protection of a strong feudal warlord’s samurai in these strife torn times, the village is repeatedly raided by a band of outlaws. Its crops are pillaged, its men killed and women abducted. The villagers decide to hire wandering, masterless samurai (ronin) to protect themselves from the bandits (many of whom are themselves ronin), offering only board and three meals a day as their payment. The first half of the film depicts the plight of the farmers and their difficult search in the nearby provincial town for samurai who are willing to stoop to working for their social inferiors. ‘Find hungry samurai!’ is the wise advice of the village elder, played by Kokuten Kodo. They eventually find one ronin, Kambei, played by the wonderful Takeshi Shimura-whose performance in this film is only bettered by his starring role in Kurosawa’s Living (Ikiru, 1952). Kambei is able to recruit a team from among the ronin passing through the town.

The latter half of Seven Samurai concerns the preparations of the samurai in the village, their efforts to win the trust of the initially fearful farmers, and the final battle of the samurai-led villagers with the bandits. In thematic terms, the central hypothesis being ‘tested’ in this social experiment between the samurai and the peasant class is the question of the possibility of class cooperation and harmony. The stakes are not only survival, but also social and, by extension, national peace and prosperity. These stakes have as much to do with the historical era in which the film is set as they have with the post-war era of 1950s Japan. The film must be seen as an effort to address pressing questions around the nature of Japanese identity, culture, class structure and nationhood that Kurosawa and all Japanese people confronted in the wake of the Pacific war, foreign occupation and the subsequent ‘reinvention’ of Japan.

In typical Kurosawa fashion, these stakes are brought to life for the spectator through the dynamic and highly charged emotional conflicts of individual characters in the film. Toshiro Mifune’s Kikuchiyo is a central figure in this regard. He is an orphaned farmer’s son who aspires to become a samurai (a not unrealistic goal in the turbulent social mobility of the Sengoku jidai). Rejected initially by Kambei as a member of the force he assembles to protect the village, Kikuchiyo pursues the samurai relentlessly and comically until he is finally accepted as the seventh of their group. Having done so, he performs a crucial pivotal role between the farmers and the samurai, overcoming some of the fears and suspicions that keep them dangerously disunited. But this go-between role means he exists at the site of the well-worn conflict that threatens to break up the alliance, a conflict between arrogant, dominating samurai and suspicious, resentful farmers.

In fact, this conflict is at the heart of Kikuchiyo’s character. In the film’s most crucial scene, Kikuchiyo presents to the other samurai armour and weaponry that the farmers had kept hidden in a secret cache, expecting them to be pleased at the discovery of these new resources. Instead they are disgusted, knowing that the material would have been stripped from the bodies of dead or murdered samurai after battle. Their anger grows and they even contemplate slaughtering the villagers. In a performance of overwhelming emotional intensity, Mifune’s hitherto clownish Kikuchiyo lambasts the samurai for their ignorance and hypocrisy, explaining that while the farmers are dull, wicked, murderous and cowardly, it is the samurai who have made them so, by plundering, burning, raping, and oppressing the peasants on behalf of their warlords. As a victim of that oppression, and one who now aspires to the role of samurai, that is, the role of warrior but in principle also the role of servant and protector of the people, Kikuchiyo’s passion arises from his tragic embodiment of these hierarchical differences between Japan’s people, and by the same token their potential synthesis.

Space is too short to do justice to all the complexities of the film’s story, or to the amazing performances of Shimura, Mifune and many of the other cast members who were part of Kurosawa’s troupe of trusted actors in the 1950s and 1960s (including Minoru Chiaki who plays the samurai Heihachi and Bokuzen Hidari whose face radiates the affects of peasant fear and powerlessness as Yohei). Furthermore, the film’s stunning formal and stylistic features-the influential slow motion death scenes, the reinvigoration of silent cinema narrational techniques, the dynamic spatial compositions-have hardly been mentioned. If anything can be said about these here, it should be insisted that Kurosawa’s formal experimentation and choices as director and editor are an integral part of the film’s exploration of these themes of social conflict and group versus individual ethics. At the same time they maximise the film’s brilliant portrayal of action and dramatic events in order to make the film as enjoyable and moving as possible.

While mention is frequently made of the influence of John Ford’s wide-screen cinematography and large scale mise en scène on Kurosawa’s depiction of action sequences, the importance of Eisenstein’s notion of a montage of oppositions is equally significant in considering the look of Seven Samurai. (1) Kurosawa’s dynamic camera, tracking fast-moving warriors and sweeping across battle scenes, is counter posed with static and close-up shots. Long takes are opposed to rapidly cut sequences from a number of camera angles. Like Eisenstein (another great action filmmaker), Kurosawa’s editing and camera direction work together to create spectacular visual impacts and elicit complex combinations of emotions and thoughts in the spectator.

The opening of the film provides an apt example. After one farmer overhears the brigands planning to raid the village in the near future, all the villagers gather to discuss the situation. This sequence is handled by a combination of long shots of the whole group and closer shots of 2 or 3 individuals arguing about what to do. Then there is a surprising, big close-up of the face of one of the peasants, Rikichi, as he proposes to kill all the bandits as a solution to the problem. Rickichi’s proposal is rejected by others as impossible and too dangerous. His hatred for the bandits is motivated by their abduction of his wife during the last raid. As he ridicules the counter proposition of begging for mercy from the bandits, Kurosawa cuts to a high angle long shot of the group with Rikichi at their centre. Rikichi then leaves the tightly formed circle of the farmers, walking outside of its bounds toward the top of screen. The following shot is a devastating recuperation of Rikichi’s rebellious gesture: Kurosawa frames Rikichi, now squatting down in his misery, at a straight angle with the sitting villagers behind him. As Stephen Prince points out in The Warrior’s Camera, the angle and the flattened out plane of the long shot has the effect of reuniting Rikichi with the village group he seeks to escape (2). As the farmers decide to consult the village elder, one of them goes out and brings Rikichi back to the group.

This is just one early example of Seven Samurai’s masterful employment of combinations of camera and character movement in a dialectical and dynamic dialogue with the spectator. A film of immense emotional impact and one that as Eisenstein would have it, ‘thinks in images’ (and sounds I would add), its pleasures seem inexhaustible to this indefinitely repeating reviewer.