In his 2022 documentary, All that Breathes, Shaunak Sen conjures a nostalgic image of the Delhi skyline dotted with kites. The lower plane of the wide shot is dense cubic buildings topped by crowds of people. The upper plane is a blanket of opaque grey sky, punctuated by black dots. The minor features of the image—both people and dots—are softened by Sen’s unusual choice of camera lens. The lens blurs the image and distorts our sense of scale, rendering the sizable skyline apparently miniature. As the camera slowly pans right the dots dance across the sky. They are, in fact, kites. The communal flying of kites is ‘a popular pastime in India, one that became a symbol of national pride in New Delhi after the country gained independence from Britain in 1947’.1 This image in All that Breathes effectively serves as a picturesque tribute to its setting, its history and culture. The image also encompasses the film’s key interests, albeit in indirect ways. 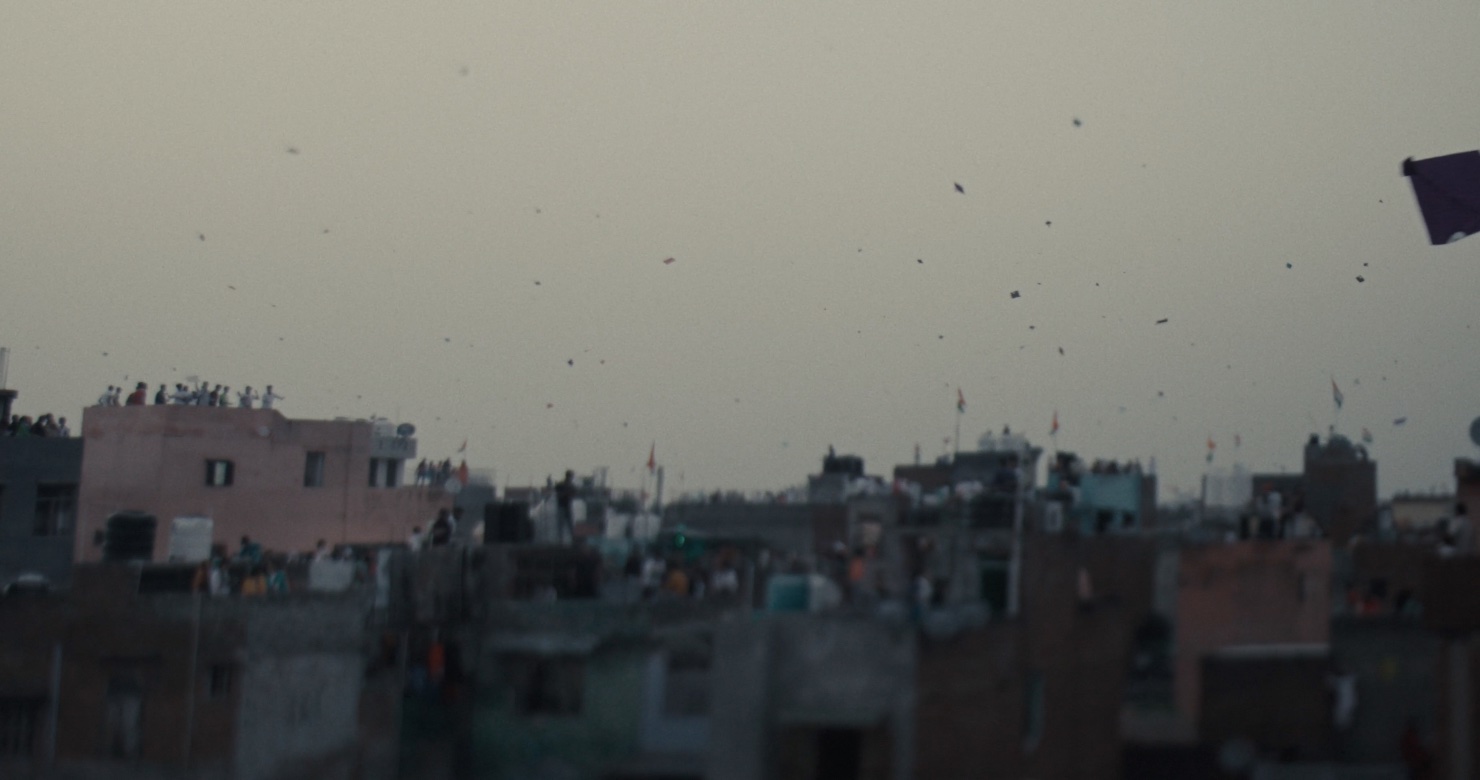 All that Breathes follows the Wildlife Rescue organisation formed by brothers Mohammad Saud and Nadeem Shehzad in 2000. The brothers, along with their associate Salik Rehman and a part-time veterinarian, rehabilitate the birds of Delhi, specifically a breed known as the black kite. The black kite is not endangered in Delhi, nor is it particularly loved—the breed is as commonplace as the pigeon in its home city. Regardless, the black kite and its ornithological cousins need help; Saud and Shehzad estimate that 90% of the birds they treat suffer from wing wounds caused by the abrasive string used to fly paper kites.2 Thus, the kite flying scene in All that Breathes not only recalls the film’s subject matter in look (a similar view of black kites circling the sky occurs earlier in the film) and name, but also actualises the source of its harm. In so doing, the scene emblematises humanity’s impact upon the planet and its ecosystems.

The litany of associations I’ve drawn thus far — “paper kite” with “black kite”, kite flying with bird flying, the paper kite’s damage to birds with humanity’s damage to the planet — is typical of Sen’s fascinating and beautifully-crafted documentary. The film is, after all, a meditation on the interconnectedness of “all that breathes”. It engages an array of environmental and social issues (air pollution, the threat of nuclear warfare, rising sea levels, rioting, the refugee crisis) to reinforce the symbiotic relation between the Earth and its inhabitants. Importantly, Sen grounds this project in the work and personalities of Wildlife Rescue. The film follows the organisation during an especially trying period — they are treating an overwhelming number of black kites due to poor air quality and are running out of funds. Their task is also daunting in the larger sense; the ecological issues Delhi faces are colossal. As Shehzad remarks at one point: “Delhi is a gaping wound. And we’re a tiny band-aid on it”.

All that Breathes goes some way toward implicating the cinema as part of this ecological circumstance. A series of arresting shots demonstrate that the cinema also “breathes”. For one, a low angle shot depicts a strip of colourful apartment buildings with birds circling below. The shot is static but reveals a strong kinetic quality both through the flight of the birds and a slight ripple on the surface of the image, which appears like the haze of a fire. The rippling effect is difficult to place, possibly a visual effect intended to simulate Delhi’s polluted air. As the shot continues, a larger set of ripples emerge in a circular pattern from the bottom right corner of the screen. The shot is effectively reframed from a low-angle view of a set of apartment buildings to a high-angle view of a puddle that emits their reflection. This change in perspective creates the impression that the image itself is alive and shapeshifting. Sen uses a similar tactic to depict the surveillance camera feed at Wildlife Rescue. The feed takes up the entirety of the frame, as if the director had incorporated the footage into his film. Suddenly, the camera pans right to reveal that it had in fact been recording a television monitor. This screen-within-a-screen trick, though inconsequential, again reminds us of the autonomy of the filmic image and the consequent instability of our view.

Such moments function to thread the cinema into Sen’s network of living entities. And if the cinema can breathe, it can also consume. A key contributor to Delhi’s air pollution is the Badarpur Thermal Power Station, which burns coal for electricity. Watching All that Breathes, I’m mindful of the precious-metal mines used to produce the digital screen technologies involved in film production and exhibition.3 Like people, digital cinema depends on the Earth for its lifeblood and equally tarnishes the planet. The aliveness of cinema means that it is also susceptible to sickness. At numerous points in All that Breathes we see technology, specifically of the digital sort, fail. A power cut in the Wildlife Rescue laboratory disrupts a surgery to rehabilitate a black kite; a freezer containing food for the birds breaks due to high temperatures; connection issues disrupt a FaceTime call between Saud and Shehzad. There is a metatextual dimension to All that Breathes, one that deepens its exploration of living things.

This is not to suggest that All that Breathes is entirely heavy-hearted in its messaging. The film offers a number of pleasures, some of which emerge from the very issues I’ve highlighted here. The film features numerous shots of Delhi’s thriving wildlife in amongst its pollution. The film opens to a slow tracking shot of a garbage-strewn area beside a busy road. As the scene unfolds, we realise that the dirt ground is teaming with squeaking mice. A subsequent tracking shot reveals mounds of litter in an empty riverbed. The mobile camera eventually arches down to reveal a caterpillar-like insect swimming in the puddle that has settled on an abandoned banner. Such shots, which are typically accompanied by an enchanting electronic score, reassert the coexistence of beauty and waste. This kind of productive contradiction also happens in terms of the black kites. The film repeatedly circles back to the astounding fact that the birds have evolved to use cigarette butts as parasite detectors. As Shehzad remarks in voiceover, “Evolution favours experimentation”. The black kites also foster an endearing bond between the men of Wildlife Rescue. At one point an unruly black kite steals Rehman’s glasses, much to the delight of Shehzad. Later, Rehman, Shehzad and Saud all wade into a lake to a rescue a single black kite from the far side. Such moments lend brevity to the film and convey Sen’s sense of the multidimensionality of life. Most poignantly, the black kites provide outlet for Saud and Shehzad’s ancestral mission. Their work is inspired by their late mother, who refused to differentiate between “all that breathes”.