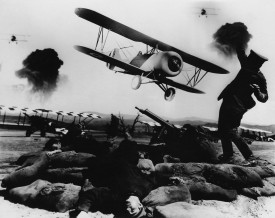 Nearly eight decades after its initial release, The Dawn Patrol occupies a unique position within the oeuvre of director Howard Hawks. Largely forgotten by the general public and only marginally featured, if not altogether neglected, within many of the major critical studies on the director, the film has now attained a level of obscurity commonly credited to the work of lesser artists. But it is my belief that, perhaps more so than any other Hawks film, The Dawn Patrol demands serious revaluation as an important work of the cinema. Although perhaps not of the same calibre as such masterpieces as Only Angels Have Wings (1939), The Big Sleep (1946), and Rio Bravo (1959), the film does possess a clear and significant connection to these works. Namely, it introduces and synthesises the key elements of professionalism, male camaraderie, and stoicism in the face of danger that would figure prominently throughout the duration of Hawks’ career until his final film, Rio Lobo (1970). It also contains an early example of the particular visual style that has become synonymous with the director’s finest works.

Based upon a treatment entitled “The Flight Commander” by “lost generation” author John Monk Saunders (1), The Dawn Patrol marks a late entry into the generic cycle of WWI films of the period exemplified by such works as The Big Parade (King Vidor, 1925), Wings (William Wellman, 1927), Hell’s Angels (Howard Hughes, 1930), and All Quiet on the Western Front (Lewis Milestone, 1930). Although a tremendous commercial success at the time of its release, the film was largely neglected by critics who saw it as yet another attempt to capitalise upon a lucrative genre. Andrew Sarris notes that “critics, though favorably disposed towards the film, tended to dismiss it in the hope that the genre would eventually peter out” (2). But The Dawn Patrol should not simply be seen as interchangeable with its generic counterparts. Rather, the film represents an early example of Hawks’ ability to rework an established generic structure in unique and creative ways.

As Dominick A. Pisano observes, “The Dawn Patrol differs from its predecessors in that it begins to interpret the genre and stretches its boundaries by exploring the psychological pressures and stresses of wartime flying” (3). Each of the film’s main characters psychologically reacts to these pressures in different ways. But their actions are also inextricably located and defined within Hawks’ code of professionalism. Faced with the continual threat of death through the dangerous missions assigned by Flight Commander Major Brand (Neil Hamilton), the young pilots of the Royal Flying Corps must maintain composure to achieve status as a respected part of the professional unit. Both Courtney (Richard Barthelmess) and Scott (Douglas Fairbanks, Jr.) succeed in this, at least initially. They respond to Brand’s orders with a detached “right”. But Hollister (Gardner James) exemplifies that breed of individual who is too sensitive to meet the demands of the war. He anticipates later Hawks characters such as Bat McPherson (Richard Barthelmess) from Only Angels Have Wings and Dude (Dean Martin) from Rio Bravo in that he must prove himself to his fellow men to earn the respect that he ultimately deserves.

The individuals of The Dawn Patrol constitute the earliest example of the Hawksian professional group. As such, the group is here less refined and cohesive than it would be in later films such as Rio Bravo and Hatari! (1962). But the key elements are in place. At the centre of the group are Courtney and Scott. Their relationship is one based in an intimate camaraderie as well as professional respect. In many ways, Hawks’ well-known description of A Girl in Every Port (1928) as “a love story between two men” may equally apply to The Dawn Patrol (4). But the relationship between Courtney and Scott is ultimately altered by a shift in the power dynamic underlying the group’s structure. When Courtney succeeds Brand as Flight Commander his behaviour begins to mimic that of his superior, creating a distance between himself and Scott. But in his decision to take the final flight in order to spare Scott’s life, Courtney proves himself once again. When Courtney is shot down by German ace Von Richter (played by Hawks) the two men salute one another, marking a true testament to Hawksian professionalism.

The Dawn Patrol also introduces several of the visual trademarks that Hawks would employ throughout his career. The film contains a minimalist approach to style illustrated by Hawks’ use of a static camera, tightly framed shots, and uniform editing. Even the aerial scenes lack the grandiose nature of those in a film such as Hell’s Angels. But while many films of the era contain similar stylistic traits defined by the limitations of early sound photography, The Dawn Patrol utilises this approach to form in a very different manner. Hawks achieves a sense of intimacy as well as, in the case of Brand’s office, claustrophobia, though his use of tightly framed interior shots. The style here is straightforward and, like many of the actors’ performances, underplayed. Aside from the more expressionistic The Criminal Code (1931) and Scarface (1932), Hawks would continue to utilise and refine this minimalist visual style throughout the following decades. One can clearly see it in operation within important later works such as Only Angels Have Wings, Air Force (1943), and Rio Bravo.

In a 1956 Cahiers du Cinéma interview, Hawks listed The Dawn Patrol among a handful of films he would like to see saved (5). But despite the film’s significance within Hawks’ oeuvre, as well as its status as an important work of early sound cinema, The Dawn Patrol remains a largely neglected film. I think this is partially due to the fact that the film has simply not been made accessible to many present day viewers. It remains unavailable on either video or DVD and receives only rare screenings on American cable stations such as Turner Classic Movies, while the noteworthy but inferior 1938 Edmond Goulding remake remains widely available on home viewing formats. But as I have noted here, The Dawn Patrol is an important work deserving of further attention. It establishes many of the key themes and concepts which would work to inform several of the director’s greatest works, and should be seen as the necessary forerunner to his later cinematic masterpieces.