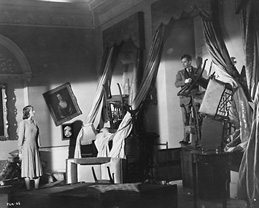 You can scarcely imagine a greater team of British filmmaking talent, behind and in front of the cameras, than Ealing Studios assembled for Went the Day Well? Viewing the film today, with its clearly pacifist message and coldly disenchanted view of what the British “at home” might do in the face of a German invasion, we can also feel much of the cynical and detached qualities that Graham Greene would later bring to that European noir masterwork, The Third Man (Carol Reed, 1949).

The director, Alberto Cavalcanti, was actually a Brazilian (born in Rio de Janeiro in 1897) who had moved to Paris in the 1920s where he worked on documentaries and experimental films with such influential directors as Marc Allégret. Cavalcanti himself directed a very modernist work, Rien que les heures in 1926, a cinematic vision of a contemporary city sharing much in common with Walter Ruttmann’s Berlin, Symphony of a Great City (1927). Then, frustrated by the lack of opportunities, he moved to Britain in 1934, where he worked for both the GPO documentary film unit under John Grierson and Ealing Studios under producer Michael Balcon.

Balcon himself noted the close connection between documentary cinema and the burgeoning Ealing Studios:

In the war, denuded as we were of so many of our people, I naturally turned to the documentary school filmmakers and as a result Cavalcanti joined Ealing, later to be joined by Harry Watt…. (1)

Cavalcanti joined Ealing as an Associate Producer and created the cracking montage sequences for The Foreman went to France (Charles Frend, 1942), and was credited by Balcon for the film’s realism and uncanny accuracy. By 1942 he was ready to direct his first feature and began adapting an original story (“The Lieutenant Died Last”) by Graham Greene, who also worked uncredited on the script.

Went the Day Well?, like Ealing’s earlier The Next of Kin (Thorold Dickinson, 1942), was specifically created to highlight the dangers of a Nazi invasion. It remains one of the most chilling and effective of all British wartime films, although it suffered from the fact that, by the time of its release, the real threat of invasion had passed. Greene’s original story centres on a poacher, Bill Purves, a Boer War veteran, who single-handedly overcomes a Nazi attempt to invade a rural English village. Aside from the central premise of invasion and the retention of the poacher as a minor character (renamed Bill Purvis), little of Greene’s original story remains in the ultimate script by long-time Ealing screenwriters John Dighton, Diana Morgan and Angus McPhail. Greene himself has given the impression that he would have preferred both his own title and his own story.

Turville in Oxfordshire stood in for “sleepy” Bramley End where this little wartime tragedy unfolds. It is just another quiet day in a rural arcadia when an army platoon unexpectedly appears on an exercise and is billeted in the village. But all is not as it seems: these are enemy paratroopers in disguise! Naturally, the villagers take some time to wake up to the Nazi menace now swarming and sneaking amongst them: not unlike those zombies, utterly unnoticed by the hero in Edgar Wright’s equally English black comedy, Shaun of the Dead (2004).

Finally aroused, the villagers react with a surprising ruthlessness. After the Germans’ brutal extermination of the village’s small Dad’s Army platoon of Home Guards, the locals make a number of attempts to summon help. Each is thwarted, savagely. But gradually the villagers begin to strike back: most violently, when the postmistress (Muriel George) throws pepper in the eyes of her unwelcome lodger, then kills him with an axe. Shortly after, when her telephone call for help is ignored, she in turn is bayoneted. This is not at all the sort of film that immediately comes to mind when Ealing is discussed and remains pretty tough viewing, even today, given the Little England tendencies still so strongly evident in British TV sitcoms and movie comedies like Notting Hill (Roger Michell, 1999).

Went the Day Well? was always regarded by Cavalcanti as the best of his Ealing films. In an interview with Elizabeth Sussex in Sight and Sound he said: “People of the kindest character, such as the people in that small English village, as soon as the war touches them, become absolute monsters.” (2)

Whether this cold and unsentimental view of the potential for violence lurking just below the surface of a quiet English village owes much to the Greene story on which it is based remains a real mystery. Perhaps, in the end, it is the clear-eyed realistic direction by that eternal outsider, Alberto Cavalcanti, who was always something of a cuckoo in the cozy Ealing nest, that is the chief reason why Went the Day Well? is so very different from the better known and so much more sweetly comforting and familiar Ealing films of the early post-war period. (3)