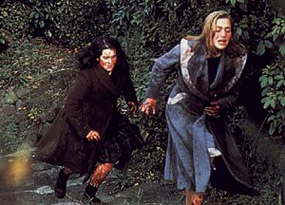 Sanity is only a form of madness favoured by the majority. (1)

The big international breakthrough by Peter “The Lord of the Rings” Jackson, Heavenly Creatures is an overpowering film to watch – yet a fiendishly hard film to analyse or discuss. It takes a viewer back, in a way that few films do, to the feverish and terrifying world of one’s own adolescence; that dangerous age when the fragile but still-potent fantasies of childhood are forced into a collision with the agonising, all-too-physical reality of sex. Feelings at once all-powerful and inarticulate, whose force is commensurate with one’s own blank inability to put them into words.

More specifically, Heavenly Creatures is the fact-based story of two 14-year-old girls. The ethereal blonde Juliet (Kate Winslet) is a spoiled and petulant fairy princess from a rich family. Dark and frumpy Pauline (Melanie Lynskey) is the frustrated but wildly imaginative daughter of lower middle-class parents. Stifled by the overpowering normalcy of life in a strict private girls’ school in Christchurch, New Zealand, in 1954, the two misfits bond in a fantasy realm of their own making: the fairytale kingdom of Borovnia, itself a lower manifestation of a quasi-mystical dimension called “the Fourth World”. (“Like Heaven”, Juliet says, “only better because there aren’t any Christians there”.) Their illusory paradise is set to the music of “the world’s greatest tenor” Mario Lanza, and nurtured by the first stirrings of a passionate lesbian love.

So far, Heavenly Creatures seems to be set squarely in a tradition of films about troubled adolescent girls who take refuge in a world of fantasy and dreams. (Others films in this mode might include Victor Fleming’s The Wizard of Oz [1939], Jaromil Jires’ Valerie and Her Week of Wonders [1970] and Neil Jordan’s The Company of Wolves [1984]). What all those films share is an exultant celebration of their young heroine’s power to dream, and the necessity of those dreams as a refuge from obtuse parents and rampaging hormones. “It does not seem to matter what one dreams”, as Tzvetan Todorov writes of E.T.A. Hoffmann, “but simply the fact that one dreams and the joy that brings with it” (2). There is no implication, in any films of this type, that immuring oneself in a world of one’s own fantasy may not be an entirely healthy way to grow up.

Crucially, the dream universes in the films cited above do not, finally, alienate the heroine from contact with the real world. They enable her, rather, to come to grips with reality (whether social or biological) in ways that eluded her before. On waking, both Valerie and Rosaleen in The Company of Wolves are ready to embrace their budding sexuality, not shrink from it in fear. Dorothy in The Wizard of Oz, trapped in pre-sexual innocence by the watchful eye of MGM boss Louis B. Mayer, is content merely to stay down on the farm in Kansas – secure in her new-found knowledge that “there really is no place like home”. Heavenly Creatures breaks with this tradition by refusing to allot dreams a positive social role. For Juliet and Pauline, the ticket to dreamland is strictly one-way. Their quest for enchantment leads the girls ineluctably into solipsism, madness and murder.

For us in the audience, it is scarcely a surprise when both girls’ parents start to suspect their friendship is “unhealthy”. (While their fairytale fantasies are lavishly brought to life by Jackson and his special effects team, the precise physical details of their “schoolgirl crush” are kept deliberately vague.) We may feel dismay when their families try to split them up, yet – given the drab and airless conservatism of this post-colonial 50s milieu – we may find it impossible to be shocked. Yet the two girls’ savage murder of Pauline’s hapless mother (Sarah Peirse) is viscerally shocking, even after half-a-dozen viewings. It is not simply that the poor woman’s blood is convincingly copious and red. (Jackson, after all, was the low-budget splatter auteur behind Braindead [1992] and other grisly delights.) The killing violates our notion that dreams (in movies, at any rate) are meant to reconcile and heal.

This outbreak of savagery and hysteria jolts us out of complacency, confronts us with the darker side of our own dreams. Fantasy, which by its very nature knows no limits, may lead us just as easily to darkness as to light. As Todorov himself warns, “[t]he chain that began with desire and passed through cruelty has now brought us face to face with death” (3).

The girls, in their act of murder, take leave of one cinematic tradition only to join another belonging to: the lethal “demon child” who haunts such Italian horror films as Mario Bava’s Kill, Baby, Kill! (1966) and Federico Fellini’s “Toby Dammit” episode in Spirits of the Dead (1968); the teenage girl who hits puberty and is beset by supernatural demons in William Friedkin’s The Exorcist (1973) and Brian De Palma’s Carrie (1976); the dream which becomes terrifyingly real in Claude Chabrol’s Violette Nozière (1978) and Nicolas Gessner’s The Little Girl Who Lives Down the Lane (1976) – two films with barely a trace of fantasy, in which the adolescent heroine is both a sexual renegade and a cold-blooded killer.

By placing his film on the cusp of these two traditions, Jackson achieves a blend of enchantment and terror that no other director has quite been able to match. Even his closest rival, Charles Laughton in The Night of the Hunter (1955), sugars the pill by insisting that innocence exists and will ultimately triumph. Heavenly Creatures takes place in a world that is wholly devoid of innocence. Some viewers may lament that “if the girls had been left to experience their blissful romance to its conclusion, then the murder would probably not have happened” (4). That is not only to sentimentalise the film, but also to wholly miss its point. Long before their parents try to split them up, Juliet and Pauline are well on their way to homicidal madness.

All they need to get there is their dreams.