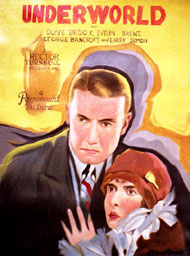 Peter Bogdanovich: Would you agree that Morocco (1930) was the most abstract of your films to that point?
Sternberg: I don’t know. They are all abstract.

Sternberg’s overall career is largely overshadowed by his partnership with celluloid diva Marlene Dietrich. Aside from their Paramount cycle of films, the Viennese’s multifarious output has been significantly overlooked. It remains outside the catalogue of cinematic masterworks that comprise the movie intelligentsia’s canon. Otherwise, film criticism easily pinpoints Underworld as the notorious first major gangster film, viewing it within a teleology that leads to Little Caesar (Mervyn LeRoy, 1930), The Public Enemy (William Wellman, 1931) and Scarface (Howard Hawks, 1932). More tangentially, others, like Andrew Sarris, conceptualise Underworld as a pre-gangster film since its lead character ‘Bull’ Weed (George Bancroft) precedes later gangsters by being represented “more in the manner of poetic prophecy than of journalistic observation”(1). Within this taxonomic approach, Sternberg’s disregard for social politics and his privileging of visual texture over the Classical Hollywood model’s obsession with characters’ psychological depth become arenas of heated debate: Are Sternberg’s films centrifugal odes containing overwhelmingly sensual imagery that resist the selective discrimination that defines exclusion-based frameworks (such as genre categories), or can we trace the creeping of late 1920s socio-historical reality in to his grandiose compositions and in-your-face frontal canvases?

After a couple of frustrated projects – The Exquisite Sinner (1927, on which Sternberg was replaced as director) and The Sea Gull – Underworld saved Sternberg’s Hollywood career. Initially shelved by Paramount, it opened in a small theatre in New York City and turned into an immediate box-office hit. It made a star of Bancroft and gained an Academy Award for story writer Ben Hecht. Its combination of unparalleled cinematic craftsmanship, calibrated use of a viewer-friendly melodramatic mode of presentation, and capitalisation on the immediate appeal of the gangster universe for the late 1920s American cultural imaginary paid off. In other words, Underworld is as much an inventive exercise of an auteur’s visual and narrative artistry as it is a cleverly woven commercial enterprise addressing the historical fabric of 1920s America. Sternberg never struggled to fully address this comprise; rather he worked within the rules of the system and re-invented the lingua franca of the Classical Hollywood cinema’s global vernacular as others, like Douglas Sirk, did after him.

Although, as Tag Gallagher states, Sternberg’s camera hardly ever assumes a character’s point of view, staring instead from the outside, “emphasising its own real presence […] with such a self-consciousness of occupying a particular space and moment, imprisoned but undetermined, unpredictable, not yet defined”, Underworld is also historically grounded via the very iconography and bodily language of the character types Sternberg strips naked (2). Captured in immediate, repeated actions with no future, haunted by the unavoidable certainty that the fateful Law will catch up with him sooner or later, George Bancroft’s facial excesses threaten to crossover into the real world and perform the acts of violence Sternberg’s elliptical narrative maneuvers manage to contain (3). Within Underworld‘s diegetic space, violence occurs rarely, all of a sudden, devoid of the spectacular affect that defines the vivid and enraged eyes of Sternberg’s gang lords. It is as though the filmmaker has chosen to track down the very origin of the defining violence of the gangster world and taken this up to a limit that cannot be crossed, that of the extended close-up, and then step back into the generic terrain of melodrama to romanticise that same world he has been unable to fully expose.

Not insignificantly, Sternberg compared his actors to spots of colour on a canvas. Rather than eluding the real, his painterly approach to the cinematic medium plunged him into it. His canvases, ostensibly rejecting unambiguous historical markers, a la Frank Capra, nevertheless come into existence as insertions within the shared, living experience of 1920s Americans, and are crystallised in a series of character types. As David Baxter cleverly explains, “Sternberg’s films were marked by territorial imagery that grew directly from his relation to the reality of the United States and his idea of ‘America’” (4). Within this context, Sternberg’s Underworld uses the standard narrative device of a love triangle and brings melodrama to the fore in order to bank on its well-established appeal among movie audiences. Moreover, it can be argued that melodrama is the fundamental mode of popular American culture. Instead of a genre per se, it is a transgeneric substratum that functions not only across different film genres but also throughout the diverse facets of the American socio-cultural spectrum – from the O.J. Simpson Trial to the Rambo series. This melodramatic mode “seeks dramatic revelation of moral and emotional truths through a dialectic of pathos and action. It is the foundation of the classical Hollywood movie.” (5) While making Underworld, Sternberg was molding a key early landmark of this long lasting tradition. In so doing, he immerses the sentimental in full-throttle violence and foretells the repeated fate of the cinematic gangster in decades to come.

Sternberg’s Underworld is a collection of quotidian gestures – lighting a cigarette, lifting a glass – coated with operatic grandeur. His camera lingers on his subjects so that they can bare their souls and, ultimately, so he can also expose the insufficiency of the generic types he was forced to utilise within the dynamics of the studio system’s mode of production. He repeatedly attempts to go beyond the limits of his working conditions through the pictorial complexity of his compositions. He is a “possibilist”. Endlessly crippled as a full-blown artist, he carved his imprint in every single camera angle, lighting scheme and minor aspect of his mise en scène. It is not simply a matter of realism versus abstraction. Sternberg’s filmmaking refuses to hide anything: “In no other cinema, except perhaps Murnau at times, do real people seem more present on the screen. Curiously they all wear masks, which reveal their nakedness.” (6) Ultimately, Sternberg, via the cinematic, masks and de-naturalises the historical to make it more real.