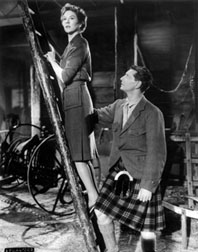 A few years ago a good friend and I travelled to Scotland. The highlight of our trip was to be a visit to Tobermory on the island of Mull. This is where some of the location work for the Powell and Pressburger film I Know Where I’m Going! (hereafter referred to as IKWIG! – an acronym used in the wonderful credit sequence) was filmed.

On our arrival there, things took a turn for the worse. I was seasick, the ferry arrived late, and my friend and I had an argument in a pub. Then we had to walk up a hill late at night to a bed and breakfast establishment which was miles away. The rain pelted us like bullets as we dragged our luggage behind us. The mystical romanticism of the film seemed little in evidence so far.

However, the next day the weather, as mercurial as it was in the film, had (marginally) improved. Our disagreement forgotten, we were directed by the locals to The Western Isles Hotel, one of IKWIG!’s locations.

The concierge at the hotel was very obliging. “We get a lot of tourists visiting us to see where the film was made”, he told us. He then took us on a tour of the hotel. He was happy to show us the room with the sweeping, spectacular view where Joan Webster (played by a radiant Wendy Hiller) prays with all her heart for the storm to abate so she can escape her palpable romantic feelings for Torquil MacNeil (the dashing Roger Livesey), and meet with what she thinks is her true destiny on the island of Kiloran.

Why have so many people fallen in love with this film? So much so that they trek to “the edge of the world” to visit its locations? The obvious answer, of course, is they want to experience first-hand the spell that Powell and Pressburger have woven with their cinematic wands. Tourists want to see the landscape, experience the wild weather, hear the folk music, take in the local folklore and listen to the spoken Gaelic. But just as equally they want to retrace the determined steps of Joan Webster, our strong-minded protagonist, who thinks she knows where she is going but ends up somewhere else entirely.

At the start of the film, the viewer might not think much about Joan’s gold-digging style. In one instance, in a nightclub when she is talking to her bank manager father (George Carney) over dinner, she tells a waiter to remove the soup that they haven’t touched. “We were talking. It’s cold now. Will you take it away?” Ration conscious Britons in the immediate aftermath of the World War II, would not have looked kindly on such behaviour.

Yet our mild disapproval of Joan is soon tempered by her one clear-sighted goal: a desire to marry into money. In the nightclub, her father tells her, “You can’t marry Consolidated Chemical Industries”. She quips back, “Can’t I?” Robert Bellenger, her fiancé, it seems, is the company first and a man second.

As the train speeds northwards, Joan pores over a map of Scotland in her railway compartment as the song “I Know Where I’m Going” plays in the background. She also consults her intricate itinerary, then gazes longingly at the wedding dress she has packed in plastic to take with her. It sways hypnotically above her bunk, hanging from a rack and lulling her to sleep. Her dream (which we then literally share with her in a truly Dali-esque sequence) is crowded with a jumble of images of swirling pound notes and a rather mummified and glamorously dressed Joan. In the dream she is even married by her father to the actual chemical company!

On her arrival in Mull, the weather promptly changes, and she is unable to cross to Kiloran to meet with her fiancé. The boat will not travel in the fog, so she is also stranded with Torquil, a naval officer who is returning to visit his island for eight days leave. However unbeknownst to her, Torquil is the authentic “Laird” of Kiloran. Her fiancé is renting it from him.

One of the chief joys of watching IKWIG! is Powell and Pressburger’s cinematic orchestration of the increasing attraction between Joan and Torquil. As the film progresses, glances of ever increasing intensity pass between our romantic leads. And in one mystical scene, lit subtly but magically by cinematographer Erwin Hillier, when they are yet to acknowledge their attraction, they gaze out at the evening, talking. Torquil asks Joan for a light and as she passes her cigarette to him, their hands touch and the cigarette smoke blends into the evening mist, the mist that is preventing them from reaching Kiloran.

By the film’s end, our protagonists declare their love for each other, but not before Joan almost drowns Torquil and a young local fisherman, Kenny (Murdo Morrison) in an aborted bid to reach Kiloran in a spectacularly staged storm. The changeable weather, the mercurial sea and the rugged island landscapes are such an integral part of the film you would not be surprised to see them in the cast of characters in the final credits. However, as well as showing us what powerful natural entities these elements can be on their own, the filmmakers take this portrayal one step further. Powell and Pressburger create a fusion between the climate, the landscape and the ocean so that the viewer becomes totally immersed in what is heard, seen and felt on the screen.

Wendy Hiller further underlined this when she was interviewed for Mark Cousins’ 1994 documentary about the making of IKWIG! – I Know Where I’m Going! Revisited. Hiller remembers a time when she was standing at a window looking out over the sea and the waving grass. “Everything moved”, she said. “The island was never still and I remember Emeric [Pressburger] standing there looking out and saying ‘That’s what I want’. And he was looking at a meadow. The grass was about… three foot high, and it was waving like the waves of the sea… the wind was moving it, as though it was moving the surface of the sea and he said, ‘That’s the Hebrides’.”

As mentioned earlier, other elements that make IKWIG! so attractive to audiences are the use of the local folk music and folklore. In how many other scenes in a film does the romantic lead profess his love for a woman by quoting a Scottish folk song? Whilst Joan and Torquil watch the local community enjoying themselves at a Ceilidh (pronounced Kay-Lee, a local dance), to celebrate a sixtieth wedding anniversary, Torquil quotes a verse from the song that the pipers are playing, “My Nut Brown Maiden”.

As he quotes the final two words “for me”, he flashes a look at Joan – a look and a line that she cannot verbally acknowledge. That is, not until the final scene of the film when she marches determinedly to the castle of Moy to fulfill the curse which Torquil must live out to the end of his days.

The magic of IKWIG! is no small part due to the fact that in this film, Powell communicates his life long love of Scotland. He would often rush off there after a film shoot had concluded, going for long walks through the Highlands where he would lose (or find) himself.

So in the end, I can honestly say that I loved visiting Mull to experience first-hand what it was like. But as I looked out at the magnificent view from the Western Isles Hotel I realised that this was a view I must enjoy for its own sake. Powell and Pressburger’s film casts its own magic that cannot be replicated in the real world. But nevertheless, we can continue to appreciate the movie-made magic of I Know Where I’m Going! over and over again.