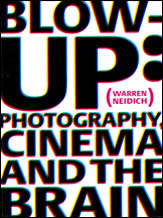 We all take in the world through our bodily perceptions and the inferences these perceptions give rise to. The shape and colour of a tree are understood as a tree because we have gotten used to connecting the percept and an actual tree. Normally, the mediation through our brain works without our awareness of this process. We can avoid hitting the tree because we have already seen it and understood that it would have been in our way if we did not change our direction of walking. Unless the relation between our perceptions, our inferences and our actual way of moving around is problematised, we just accept our navigating skills as natural.

But the seemingly natural way we navigate through our nature and city scapes doesn’t necessarily mean that the relation between perception, inferences and the world is natural in a biological way. In his seminal essay on the work of art and mechanical reproduction, Walter Benjamin has claimed that perception itself has a history (1), and Donald M. Lowe, in his History of Bourgeois Perception, has argued that human perception is changing due to societal structures (2). Theories connecting societal, cultural or technological transformations to changes in the human perception apparatus have almost always been followed by theoretical and historical oppositions claiming that the human body is more or less stable when it comes to its fundamental capacities.

One of the strongest international tendencies within cinema studies, for the time being, is informed by cognitive psychology. A leading idea in cognitive or ecological theories is that the human body and brain are shaped through evolution, which makes it futile to claim that historical changes within a narrow time span of a few hundred years or less should change the built-in soft- and hardware in the brain. For instance, one of the leading proponents of the cognitive proclivity, David Bordwell, is arguing against any sort of easy connection between historical cultures and perception when he says:

Over several million years, humans evolved in a savannah environment, with its open spaces, unobstructed views of danger and shelter, and the possibility of easily retreating some distance from other humans. We have not had sufficient time to adapt (in the strong, biological sense) to the challenges of life in any city, ancient, medieval, or modern. (3)

The artist Warren Neidich is also deeply rooted in cognitive science but at the same time he claims that, right now, the human brain is going through a phase of postmodernisation or cyborgisation due to changes in our media technological environment. His book Blow-Up: Photography, Cinema and the Brain attempts to cross over the opposition between the evolutionism found in cognitivism and the historicism in cultural studies – or rather, he is embracing a tradition of cultural studies but with the support of cognitive science.

Neidich argues that through technologies of image-making such as photography, cinema and the computer, the human brain processes are changing due to the different kinds of stimuli received in the cerebral cortex. The human’s experiences with plastic art play a very important role in these processes, because art is at the forefront of exploiting new technologies in ways that most thoroughly challenge naturalised experiences and perceptions. The changes taking place are described as “visual and cognitive ergonomics” to indicate that it is humans’ (visual) perception and cognitive capacities (inferences) that change when confronted with a different prosthesis of vision.

The invention of glasses in the twelfth century began a long history in which man was no longer seen as once and for all destined by an original set-up created by God; or, in a more scientific description, by biology as fate. The human body was instead seen as something changeable. By the change of sight, it became possible to think of man in a way dramatically different from the determination by creation. Man became a self-made man, in the sense that man could and would make himself up according to historical requirements and possibilities. It is not only by prosthesis that man creates himself. Neidich insists on posing the question about the limits of man’s cognitive and perceptual changes when surrounded by “smart” technologies. “In the end the brain, its neurons, synaptic connections, and neural networks are sculpted by the inputs it encounters after birth. The question then becomes: What if these inputs are artificially constructed rather than real or organic?” (61)

It is precisely with the artificially-induced transformations of the brain that avant-garde aesthetics become important, in that the avant-garde – and not least avant-garde cinema – is giving voice to the consequences of the fact that our brain is sculpted by artificial stimuli. Avant-garde cinema is already working with artificiality, for instance through its uses of grit structures and montage.

In the present situation the modernist object, space, and sense of time have sculpted, through the process of neuroselectionism…the neurosynaptic structure of the modernist observer. Postmodern objects, space, and time have not yet conspired to construct a population of observers who have the neurobiological apparatus to understand them. (63-4)

But this is about to change and Antonioni’s magnificent film from 1966, which lends Neidich’s book its title, is used as a kind of evidence for a transitional understanding of time and virtuality.

The transformations of the human brain not only affect visual perceptions but they have considerable consequences for the ways in which the human mind or brain works, in all its aspects. The neurons are creating new “fast lanes” in the brain. Due to physical modifications of the brain, we will come to think differently compared with the modern or modernist paradigm we are still living in.

Although cognitive ergonomics evolved from visual ergonomics, it is differentiated from it. Visual ergonomics is a term that defines a composite of strategies through which nature is represented in the non-plastic arts and is reformed and organized according to implicit and explicit knowledge of neural processing; whereas cognitive ergonomics relates to the way that artificial information is reconfigured for the process of cognition occurring in the brain. (75)

Warren Neidich really makes an effort to put his argument through, but the book is not without serious problems as an academic work. Neidich skips all arguments not supporting his ideas of the historical sculpting of the brain. He never takes issue with contradictory evidence or theoretical arguments such as, for instance, Bordwell’s. Bordwell is only quoted for support of Neidich’s way of understanding the development of the human brain, although Bordwell seems to think contrarily to Neidich. Secondly, Neidich strings together a lot of only loosely connected ideas and quotations and makes a collage out of them, which is then given as a pertinent argument. Furthermore, he introduces many theoretical claims which are actually not dealing with what Neidich wants them to deal with. For example, he quotes Gilles Deleuze as if he is talking about transformations of neurons’ pathways through the brain, which he is not. Neidich decides to totally overlook the whole epistemology connected to Deleuze’s way of thinking. What Neidich understands as kinds of neo-Darwinist evolutionist facts, Deleuze would regard as creative ideas breaking away from the paradigm of natural science and objectivism which Neidich is depending on.

One can also question other parts of Neidich’s belief that the cyborg brain corresponds to a postmodern world shaped by avant-garde aesthetics. Is this development at all a correct description of the historical evolving culture? Are avant-garde aesthetics at the forefront of a societal development and is this mirroring the ways in which human cognition develops in a physiological sense? I think these assumptions are less than convincing and Neidich has little support for this revolution of the human mind-set. The whole neo-Darwinistic idea seem to me a rather reductionistic way of understanding what is going on in aesthetics, in society and culture, and not least in the human mind-set. And this crude reductionism is in fact, most of the time, avoided by cognitive-informed cinema studies.

I also find it rather strange that Neidich combines his futuristic idea about “the ‘cyborg-ization’ of neural networks” (93), as he describes it, with an altogether Romantic idea about the artist. The artist is for Neidich a very special being, capable of seeing things differently and more accurately from the perspective of the (future) historical point of view. About the artist and the photographic space, Neidich claims:

The artist looks into that same space and looks beyond the clichés, instead sewing together discursive regularities bound together by the synthesis of his or her peculiar self. It is in these regularities that the artist can see what for others is impossible to see. In this sense the artist and the community of artists, as they have studied the same history of visual relations and have experienced as an ensemble the constant reinvention of the objective world in which they live, create other systems of relations which in some cases are the antithesis of those of the mainstream. Together they propel another type of vision into the future, which one day may possibly be understood as conventional. (41)

The interesting part of Neidich’s book is the attempt to cross-over different disciplines within cinema studies and cultural studies. Unfortunately, this attempt does not have a very successful outcome in his book.