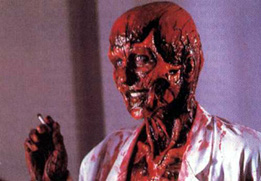 To define “perversion” would be to nomenclature its existence as a verb without a life beyond any reified meaning. Perversion is no noun (not “the pervert”) nor adjective (“perverse”). Perversion primarily is a temporal verb, a duration which, far from simply defying or deviating from its imagined opposite “normality”, proliferates trajectories, resonating far beyond its courses, intended or not. There is perversion implicit in the impossibility at the heart of will to produce an expected result, from the project of normativity performed in producing one’s everyday subjectivity to the reception of words, images and their polyphony of meanings. Meaning is transformed, when thought through perversion, as nothing more or less than the vertiginous redistribution of flesh, self and world found in affect.

Perversion neither defines nor demarcates itself. It is the purity of the something-otherwise, available through the most radical or the quietest of acts. However act does not guarantee perversion. Nor does will. What perversion resonates is the redistribution of self through sensation and perception, a transformation of subjectification and signification. Perversion describes a project of risk and of hope. It is not a safe or predictable experiment. One of film’s great promises is impossible worlds, worlds unrealisable in the everyday, which fold us within the unperceivable cinema allows us to perceive. Perhaps this is why cinema seems an appealing realm through which to think experiments in perversion. Here are presented then, five such experiments in perversion within representation, within film and spectator theory, within flesh, desire and power.

The (Cinematic) World, The Flesh as The Devil 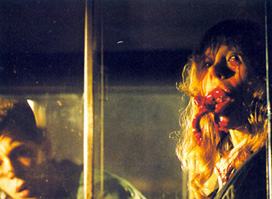 There is a clear investment in cultural hegemonic processes of normalisation and stabilisation of both self and society. In reference to cinema and all forms of art, censorship reflects the anxiety society exhibits at that which threatens the perversion of axes of social norms. Norms are given power not through their value so much as through their repetition, which therefore repeats the power by which repetition is enforced. At best censorship denies extreme versions of everyday paradigms of power which rightly disgust through their hyper-representation of issues such as misogyny, racism and other minoritarian oppressions. At worst it prevents any alteration in these paradigms by devaluing certain issues. Sexuality which does not conform to established heterosexual or vindicated “nice” homosexual relations, the exhibition of the interiors of the flesh, and violence that indulges in that same flesh, are usually the victims of censorship. Clean violence such as gun death can punctuate films but not so easily visceral worlds, even those not necessarily related to death or violence but baroque configurations of flesh for their own sake (seen most emphatically in films such as City of the Living Dead [Lucio Fulci, Italy, 1980] or Hellbound [Tony Randel, UK, 1988] as two examples). Splanchnic explorations frequently exist beyond or independent of narratives of aggressive forms of violence, showing that “violence” is not necessarily concomitant with “gore”. Here we have flesh as devil. The occult interiors of our thoraxes provoke the risk of becoming-otherwise, materially expressing our capacity to unfold and refold. The body is a clandestine geology. In flesh and desire we exist as plateaus over which we have no control, knowledge or, as seen in gore cinema, image. Folding flesh and desire outward through provoking images refolds and thus transforms the self. Those who resist transformation most frequently resist the encounter which brings its ecstasy (ex-stasis, outside of self) into being – the encounter with perverse worlds often only available in film. Film encourages pathological voyeurism, without object or aim. This alone fulfils traditional clinical definitions of perversion. Perverse films eviscerate the viewer as they eviscerate the represented flesh, and our skin is pinned back, our selves autopsied, destroyed to be reborn in alternate configurations of cinematic pleasure and self.

Although this issue is adamantly not about censorship, it is no coincidence that many of the films discussed in this issue directly address themes frequently the victims of censorship. Xavier Mendik’s hymn to necrophilia A Kind of Perverse Loving lends itself to a mention of censorship, as many countries have maligned and banned the work of Joe D’Amato, as well as films which deal with necrophilia. Mendik also investigates the censoring nature of film theory and its notions of what is considered “appropriate” for academic analysis. Essential to “normal” subjectification is the body signified appropriately – genitals signify gender, skin race, entrails the forbidden chambers of the self. No part of the body fails to be invested with meaning, location, function and attached social value. Jack Sargeant’s Hot, Hard Cocks and Tight, Tight Unlubricated Assholes resignifies the anus from abject to libidinal. Although it is arguable the female anus is desired in heterosexual matrices, here the female asshole is resignified as male, thus using an essentially, pragmatically non-gendered organ and playing with its nonetheless gendered aspects to challenge sexualisation of flesh and explore practices of corporeal signification through an organ invested more with disgust than desire. Inherent in the body being signified is the signification of the ways in which that body acts and is acted upon. If processes of normativity as self-regulation represent self-preservation, then the delirium of acts which repudiate that preservation encourage perversion. While binaries constitute the majority of definitions of both flesh and desire – black/white, male/female, living/dead, pleasure/pain, female/male, dominant/submissive – masochism affirms desire and the flesh beyond binaries. All disciples of cinematic perversion know too well the delights of suffering in the face of intense pleasure. Beyond binaries masochism is essentially an onanistic practice that enslaves the giver of pain to the libidinal trajectories of the masochist’s suffering. Cinematic viewing is, similarly, onanistic, particularly since the advent of home-cinema technologies. The submissive is the powerful, the dominant a slave. Pleasure is pain, satisfaction is mournful, anticipation fulfilment. Lindsay Hallam’s Whips and Bodies investigates these ideas and the ways sadism is complicated by the masochist’s demand for pain. 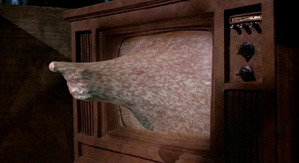 Affect theory is becoming increasingly important to film theory. Following on from attempts to move beyond psychoanalytic film theory – a theory based on meaning as nostalgic enlightenment through an excavation of the already-happened – affect theory negotiates the pure potential of images to transform the viewer. This shift can be seen in Michael Goddard’s article Towards a Perverse Neo-Baroque Cinematic Aesthetic where the philosophical work of Deleuze and Guattari becomes more useful in thinking cinematic affect than the seemingly more appropriate cinema books of Deleuze. Indeed, philosophy as abstract in its unapplied form, offering no appropriate subject through which it may be used as an analytic tool, is re-abstracted rather than elucidated through its play in investigating cinema. This form of analysis explores the multiple meanings and interpretations of post-structural philosophy to celebrate the multiple affects of the cinematic experience. Martin Ham explores these notions in Excess and Resistance in Feminised Bodies. The notion of “excess” takes images and concepts and highlights these key elements of cinema as beyond any notion of singular meaning and in excess of a dialectic configuration. Images seep through their signification, their ability to be known and understood by the viewer, who is also made to seep, through the affect of the image. This emphasises the inherent perversion in all signification as inevitably going beyond its imagined limits. “Resistance” refers both to the need and the compulsion to view and indulge in excessive images, and to exploit their seepage for political purposes. After all, the “pervert”, whether simply a diversion from the primacy of the white, heterosexual, able-bodied male, the purest sign in phallocentric culture, or the pathologised subject of various medical discourses, is both the threat to and the victim of “normal” society. However, as Foucault and Deleuze and Guattari warn us, we must not simply take perversion as a fetishistic, superficial celebration of transgression or “weirdness”, a poked tongue at the mummy and daddy of dominant cultural paradigms, defined purely through the paradigm from which it diverges. Perversion involves both risk and accountability. It compels both an acknowledgment of what is at stake – that which goes before – and what is potential – that which goes beyond – and acceptance that these prior acknowledgements can only be tactically understood.