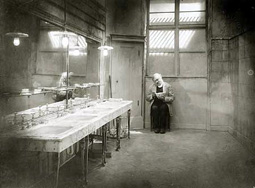 F.W. Murnau’s Der Letzte Mann or The Last Laugh, as it was known for its US release, is probably best known for its lack of intertitles. While generally recognized as a masterpiece, it does not have the current pop culture cache of Murnau’s Nosferatu (1922) or the beloved, legendary status of Sunrise (1927). Modern audiences tend to watch it and simply marvel that the story is so easy to follow, but this is only a small part of the film’s technical accomplishment. Der Letzte Mann is more than a tour-de-force of cinematic technique; it was an attempt to find a universal language for the cinema and to expand the expressive qualities of the camera.

Der Letzte Mann tells the story of the emasculating downfall of a doorman at a fancy hotel, played by Emil Jannings. The film begins with an exhilarating sequence in the rain, introducing us to the fast-moving world of the hotel and the swirling business of a 1920s city. The rhythm of the scene is set by the constant spinning of a glass revolving door that separates the chaos of the outside elements from the glittering and efficient atmosphere of the hotel lobby. The doorman stumbles and strains under the weight of a particularly heavy piece of luggage and is forced to come inside, have a drink, and take a rest. When he returns to his post at the front of the hotel, we see the extreme pleasure he takes in his job. Jannings, whose massive presence and broad expressions are perfectly suited to the role, preens in his brass buttoned coat. He smartly salutes the guests as they enter the hotel and exults in escorting two attractive young ladies – one clinging to each arm – to a taxi. On his walk home he is a man of respect in the neighborhood, condescendingly patting children on the head and nodding at his friends and neighbors. On the following day, it becomes clear that his difficulty with luggage has not gone unnoticed. There is a new porter in front of the hotel and the stunned doorman staggers to the manager’s office. He is informed that he will replace the lavatory attendant, the oldest staff member at the hotel, who is being sent to a pensioner’s home. The doorman pleads to remain in his old job as the manager impassively puffs on a cigar. Finally the manager tires of these entreaties and he forcibly strips the doorman of his magnificent coat and forces him to go to his new post. Utterly bereft, the doorman clings to his old identity, stealing his old coat so that he can walk home and still maintain his former status.

At his daughter’s wedding party that evening he gets drunk and falls into a stupor where he dreams of his job and of effortlessly balancing a huge suitcase on one hand. The dream is shot in a vividly expressionist style, with distorting lenses, canted angles and superimpositions. His masquerade is only successful for a single day and he is found out by one of the gossiping housewives from his building. He finally sadly accepts his fate and crumples into a whimpering ball of self-pity at the back of the bathroom. Suddenly, the first and only intertitle of the film appears, explaining that this is where the story truly should end, but that the author has taken pity on the doorman. In the sequence that follows, we find out that the doorman has suddenly become rich and we watch him return to the hotel as a swaggering millionaire.

Film scholar Bert Cardullo writes that this epilogue is generally considered to be an aberration, added on to what is meant to be a tragic tale (1). He goes on to argue that it is integral to the film, which he reads as parody of German attitudes about one’s profession and its connection to one’s social standing. The German and American titles of the film are often discussed in the debate about this ending. The Last Laugh emphasizes the epilogue, while Der Letzte Mann or The Last Man seems to have more tragic implications. In his famous book, which seeks to find a connection between Weimar cinema and the rise of Nazism, Siegfried Kracauer writes that the film’s intent is tragic. Nevertheless, he argues that the hotel’s treatment of the doorman is rather humane and that it his obsession with having power that betrays a more general German fixation on authority. He sees the conclusion as Carl Mayer’s sarcastic send-up of “the Hollywood ending” and American cinema more generally (2). Even though I find many of the scenes in Der Letzte Mann deeply affecting, I tend to agree with Cardullo. In the party scene, the doorman drunkenly imitates the actions and gestures we saw in the opening sequence. He salutes phantom patrons with mock solemnity and seems to laugh at his own pomposity. Even as this scene reveals his bitterness about losing his job, it also serves as self-parody. No matter which interpretation one favors, the two endings of the film create an intriguing ambiguity that continues to lend the film great interest.

The credit for Der Letzte Mann is attributable to three individuals, Murnau, screenwriter Carl Mayer, and cinematographer Karl Freund. Mayer was the most important scenarist of 1920s German cinema. His first credit was for the seminal The Cabinet of Dr. Caligari (Robert Wiene, 1919), where he began experimentation with the subjectivity and extreme psychological states that typifies German Expressionist cinema. Lotte Eisner, German art historian and expert on the period, explains that Mayer’s later scripts, particularly the collaborations with Murnau, combined expressionism with the other major strain of Weimar filmmaking; the realist Kammerspiel film, developed by theatrical producer Max Reinhardt, that pioneered a more subtle, psychologically nuanced style of acting to be performed in an intimate “chamber play” setting. (3) Earlier Kammerspiel films had already begun experimenting with minimising intertitles, but Der Letzte Mann is the pinnacle of the form.

A similar combination of the two styles can be found throughout Murnau’ work (he who began as an assistant to Reinhardt). In Nosferatu, he uses real settings and location shooting to create a shadowy, expressionist world. In contrast, Der Letzte Mann‘s realistic urban location is created out of elaborate sets built at the famed UFA studios. Freund, already an established cinematographer was the man responsible for seamlessly combining the two impulses in the film. To achieve this, he employed what has been called “the unchained camera,” a style of cinematography that was known for its free and energetic camera movement, as well as its use of unusual angles. The “unchained camera” helped provide a sense of a subjective point-of-view and is almost erotic in its unbridled eloquence. Freund would go on to shoot Fritz Lang’s Metropolis (1927) as well as many other classic German films, and then move to Hollywood where he won an Academy Award for The Good Earth (Sidney Franklin, 1937). In the final stages of his career, as the cameraman for I Love Lucy, he developed the three-camera system for television.

Der Letzte Mann is a vastly entertaining film. Jannings’ presence is magnetic and his every expression and pose draw us further into the narrative. Almost every scene is interestingly shot, but none feel self-indulgent or unnecessary. The film is painstakingly constructed for easy comprehension. One leaves the theater with a sense of satisfying completion. It is only later that the film’s complexities and contradictions begin to nag.