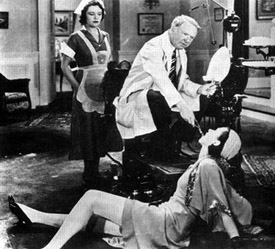 There is something about Fields himself that leaves one staring vacantly after the laughter is over.

At the heart of W.C. Fields’ comedy lies madness. The Golf Specialist (Monte Brice, 1930) is an escaped lunatic posing as a gentleman of leisure. In The Fatal Glass of Beer (Clyde Bruckman, 1932), an impoverished frontiersman haunts a frozen landscape eating dogs. Felton City (named after Fields’ mother (2)), setting for The Barber Shop (Arthur Ripley, 1933), boasts “the largest insane asylum in the state”. This might explain why watching Fields’ films, with their rigid framing and minimal direction, often feels like eavesdropping on the demented posturings of a madman pacing his cell. So many of them feature the inexplicable intrusion of birds – in The Dentist they flurry from the lavish beard of a patient, shot at by a distracted Fields as they fly past a crumbling ceiling – that we may be reminded of Georges Franju’s films (especially Les yeux sans visage [1959], featuring another medical man with daughter problems), where birds signify insanity. If this film was a horror film – and the dentist is for many the ultimate “real life” sadist, strapping patients down in his torture chamber, terrorising them with invasive instruments – then Fields’ disintegrating house might stand for his disintegrating mind (3). The Dentist opens with him forgetfully seeking items already in his possession; the fact that his workplace and home share the same premises suggests a kind of schizophrenia, a seeping of boundaries.

The Dentist was the first of four 20-minute shorts Fields made in the early 1930s with legendary but then-fading Keystone Cops producer Mack Sennett (4). Basically transpositions of Fields’ famous vaudeville sketches, their primitive cinematic qualities are outweighed for fans by their value as rare records of that stage work (5). More than that, though, they are laboratories in which Fields made the transition from a successful silent era, and honed a comic persona he now channelled through that famous Voice, offering variations on the same obsessive set-ups and themes: in particular, the undermining of a man at work by family and outsiders, and the failure to sustain self-image.

The tripartite structure of The Dentist shows Fields (his character for once deprived of an extravagant name) at home, play and work, his embattled masculinity characteristically revealed through damaged phallic props – a shrinking block of ice; bent golf-clubs. Making no concessions to audience empathy, Fields presents the dentist as a self-satisfied bully, contemptuous of family, friends and patients alike. He treats his daughter (Babe Kane) like a maid, sneers at old ladies, cheats at golf and, in the ultimate fit of pique, hurls clubs and caddy into a lake when he fails to reach the green. He is an impotent man, devoid of appetite and, unusually in a Fields comedy, wifeless (did he drive her to suicide?): after he forbids the “healthy” or “natural” relationship between his daughter and her fiancé, sexuality in the film degenerates into grotesque parody.

Dentistry, with its prone patients and tool-wielding doctor, is a ripe metaphor for violation, and one woman (Dorothy Granger), unconsciously displaying her body at various angles for Fields, screams and flees when the dentist hovers over her mouth with his dental mirror. He “mounts” a second female patient (regular Fields foil Elise Cavanna) as she wraps her long, stockinged legs around his back (this sequence was cut from TV showings in the 1950s and 60s (6)); soon she’s writhing on the floor, reversing the “rape” by penetrating his coat pocket with her high-heeled shoe, and manoeuvring the dentist onto the patient’s chair (7). After this extraordinary, censor-baiting sequence, the next can only take on perverse Surrealist overtones as the dentist hunts for a mouth braying “Ah, ah” in a huge hairy beard, before drilled teeth spurt out (8). Here is a fascinated repulsion with the sexual act, hysterically displaced. Of Fields’ contemporaries, only Sternberg and Busby Berkeley were as provocative.

Of course, this portrait of floundering manhood is shaded with rank misogyny. Usually, the Fields character is emasculated by tyrannical wives and mothers-in-law, but here, freed from matrimony, he attempts to control his daughter’s body and sexuality, treating her as a maid and forbidding contact with her fiancé, as I mentioned earlier; shoving and pinching her, locking her in her bedroom like a fairy-tale princess, and kicking her chamber pot. A correlative to this is the pattern of Oedipal struggles Fields fights and loses – here, the father he knocks over is avenged by the son; the dentist is only rescued by the despised young man he will have to accept as a son-in-law. The contemporary background of the Depression, never mentioned in these films, adds poignancy to tales of middle-aged men unable to control hostile circumstances (9).

With what I have written, I am in danger of falling into the kind of ponderous pomposity Fields loved to prick. I have failed to catch the unsettling experience of watching a Fields film – the interminable rhythm that subsumes everything to his characters’ black hole persona, only to be shattered by sudden violence; the visual whimsy that sees a dazed senior citizen dragged away from a golf green, leaving false teeth to obstruct his assailant’s line of vision; the throwaway remarks that can create startling, alternative universes (Bugs Bunny does this too, but for Fields it is a way of compensating for an unbearable reality); or that musical drawl of a Voice, sarky, whining, pretentious, mumbling, monotonous (almost autistic). Its failure to communicate, like the films’ static staging (where any movement is futile and circular), is an extension of the characters’ broken state. Fields’ characters are mechanisms spluttering into obsolescence (like the dying Michel Poiccard in À bout de souffle [Jean-Luc Godard, 1960]), never able to complete the task in hand (10). Kim Newman has recently suggested that Fields left little influence on contemporary film comedy (11), but much of the cranky, abrasive yet well-heeled persona developed in The Dentist is reworked by Seinfeld co-creator Larry David in his acclaimed TV series, Curb Your Enthusiasm (2000, Andy Ackerman et al).